Alltools Geelong Pty. Ltd. recently took out the AIS Shareholder of the Year Award, in the large format category; with part-owner Bevan Branson declaring the win as nothing short of a huge surprise. 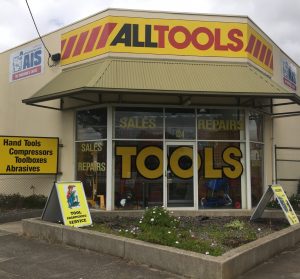 Although the 600 square metre store is over 20 years old, Mr Branson said the store’s sales continue to grow in leaps and bounds, and has experienced particularly large growth in the past 12 months due to its ability to continually merchandise so effectively, that it ensures good sales.

“I think the store growth is attributed to on-going improvements in the store, including always looking how we can do things better and constantly expanding on our range. Improving on our merchandising has also had a massive affect on our sales. We are very, very good at ensuring we have the right stock, we always have. But you have got to display stock effectively in order for it to move and that’s where a lot of our thrust has been lately – improving our merchandising,” Mr Branson said.

“It was a nice surprise winning the award on the night. I was quite happily sitting at the table chatting away and drinking a beer and next thing I know my name was called and I had to think very quickly. It didn’t occur to me that it would be us this year but it was a very nice award to win.”

“AIS mentioned a few things as to why we won the award, but one of the factors was that we had very very strong growth over the last 12 months. We have also had substantially good growth since we have joined the AIS group. I think us winning the award was based on a number of factors, including participation in marketing events and with the group buyers. Hopefully we can back up our success again next year,” he said.

Alltools Geelong was originally opened by Mr Branson’s parents, Dean and Sandra Branson, in 1989, when Mr Branson was still in high school.

Mr Branson finished high school in 1992, before going onto university to study a Bachelor of Commerce, majoring in marketing and management, and also studied chemical science in a second Bachelor of Science degree.

“My father retired mid-way through 1997, which was when I took over the running of the store and the business is now half owned by myself and my mum Sandy. She still works in the business with me,” he said.

Mr Bransons’s parents built the store, however the business was not initially bannered under the Alltools Group, with the store joining the group just four years ago.

“We decided to go to AIS because when the initial group we were in divided up. We had a United Tools store down the road from us – so joining this group wasn’t really an option for us. This store is only 300 metres away. We began talking to suppliers about the group that would be the best fit for us and AIS seemed the most suitable fit for the type of business that were,” he said.

Although the store does not sell hardware; including timber, nails and fasteners, the store is primarily designed as a specialty tool store.

“Our range includes power tools, hand tools, machinery and some industrial supply products. Our customer base is trade and industrial primarily; but we still deal with the DIY guy or the more sophisticated tool buyer, such as the customer who is seeking better quality tools that what may be on offer at Bunnings. Our main competitor is someone like Total Tools, as they have the broadest range of stuff that may be akin to what we do. We have some machinery type stuff, which Total Tools may not go into, but on the whole most of it is a similar sort of model,” he said.

“Most of the trades that you can think of, we cater to. So the automotive guys, the sparkies, the plumbers, the earth movers, the sheet metal fabricators, the whole lot. I can’t think of any trades off the top of my head that we would not cater to in terms of the stuff that they use. What makes us unique from competing stores in the area is our price, service and stock,” Mr Branson said.

Mr Branson said the store has been involved in several marketing channels for some time, but currently catalogues are its main marketing thrust.

“There are currently six catalogues that go out per year now. Other than that there has occasionally been radio and newspaper marketing. However, primarily our marketing is through catalogues,” he said.

Mr Branson also said that to grow and market the store over the next 12 months, he intends to focus on many things including marketing campaigns, word of mouth, staff training, and ensuring the store’s retail offer matches local demographics.