While Government stimulus packages helped keep Aussies employed and businesses afloat this year, new research reveals that three in four business owners (72 per cent) admitted it was essential to their business survival. The majority also stated that JobKeeper made the biggest positive impact to their business.

The findings come from a survey of an independent panel of 121 Australian business owners[1] who accepted Government stimulus, commissioned by online finance information platform Money.com.au. The full survey results, including breakdowns across organisation size, State business is predominantly based, and years in operation, can be found here: money.com.au/government-stimulus-impact-on-business-study 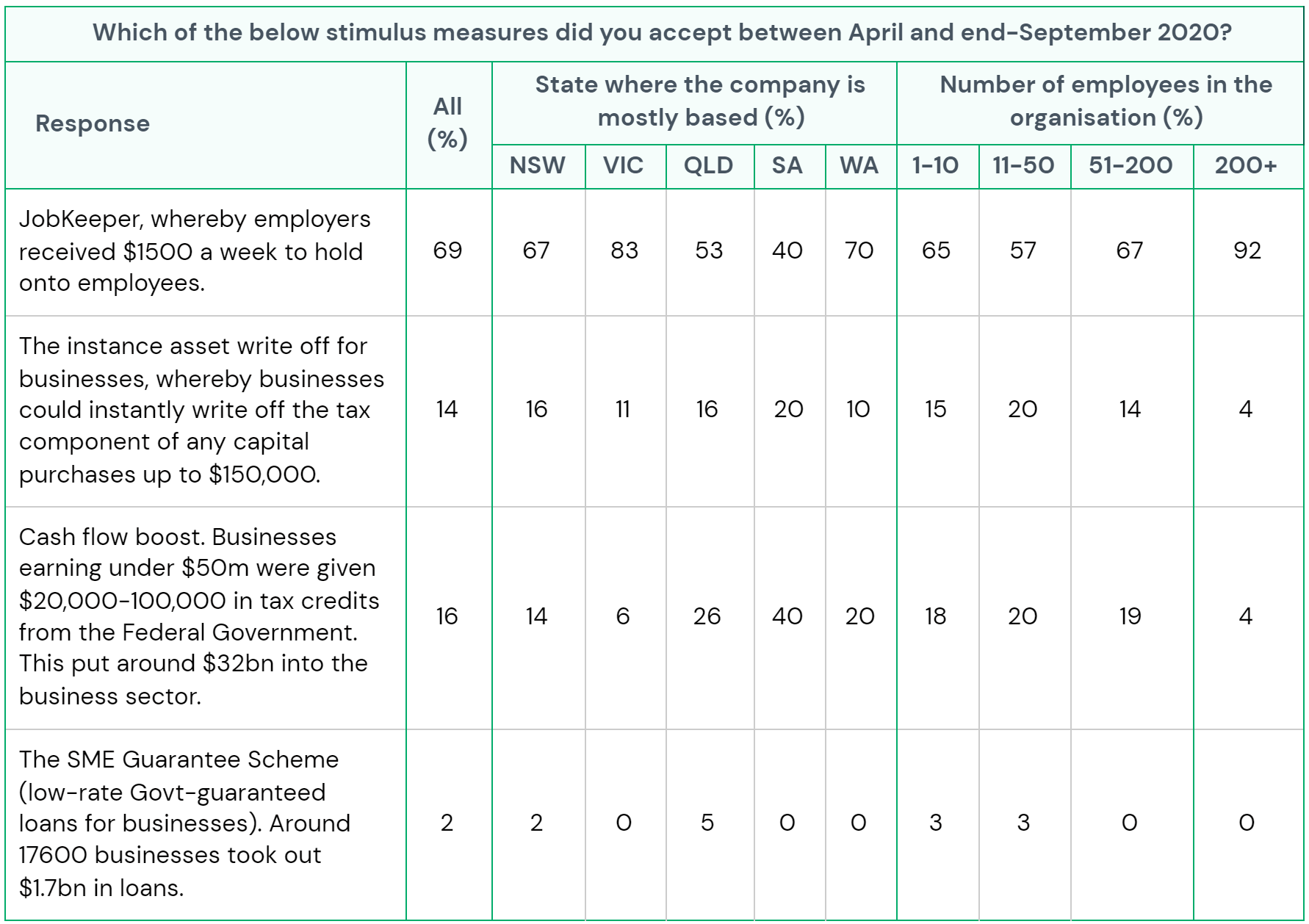 Across the respondent pool, 69 per cent accepted JobKeeper payments to retain employees, 16 per cent received tax-free payments through the cash flow boost scheme, while 14 per cent claimed deductions on eligible asset purchases under the instant asset write-off measure, and just 2 per cent took out finance linked to the SME Guarantee Scheme.

When comparing the states, the greater proportion of businesses that benefitted from the stimulus were in NSW with 82 per cent of NSW businesses seeing these measures as essential to their survival, followed by 72 per cent of those in Victoria and 58 per cent in Queensland.

JobKeeper was considered the most helpful scheme among 75 per cent of Victorian businesses, followed by 69 per cent of those in NSW, 63 per cent in Queensland and compared with 40 per cent in South Australia. It is estimated that Victorians will make up 60 per cent of those on JobKeeper over the December 2020 and March 2021 quarters,[2] as a result of the extended lockdowns and social restrictions across the State.

The survey reveals that the largest proportion of businesses who needed Government stimulus for their survival were in the food services industry (80 per cent), while 64 per cent of retailers said the same. This compares with just 33 per cent in the transport industry.

Money.com.au also found that both the instant asset write-off and cash flow boost helped 14 per cent of business owners the most, and just three per cent said the SME Guarantee Scheme was most helpful. Less than five per cent of the $40 billion scheme has been used to fund loans since its announcement in March, suggesting many business owners saw more benefit from accepting other stimulus packages on offer.[3]

The data also reveals the extent to which these measures helped business performance during the country’s economic downturn. One in five business owners (19 per cent) said their businesses did better than last year, and 35 per cent did the same as last year, thanks to the stimulus measures. However, nearly half (45 per cent) said they were worse off this year.

Interestingly, established businesses were not immune to the effects of this year’s economic downturn: 66 per cent of businesses in operation more than 10 years said their business did worse this year, compared with 2019. In contrast, 38 per cent of young businesses in operation less than five years said the same. This suggests many established businesses incur higher operating expenses, which they struggled to meet during this time. They also may own their own premises, while younger businesses are more likely to rent enabling them to take advantage of commercial lease subsidies.

A high proportion of retailers also said they did worse this year, compared with last year, despite Government stimulus measures, with 55 per cent citing this. This is compared with a quarter (25 per cent) of those in finance and 17 per cent in telecommunications. As eCommerce experienced an influx in consumers, with more than 900,000 households shopping online for the first time this year, retailers with long-standing brick-and-mortar offerings, such as Jeans West and Alice McCall, entered voluntary administration, suggesting there are still gaps to fill when it comes to supporting Australian businesses.[4]

Licensed financial advisor and Money.com.au spokesperson, Helen Baker, said with many stimulus packages set to wind down next year, including further cuts to JobKeeper in January, it is likely that ‘zombie’ businesses who have kept afloat this year due to Government incentives will cease to exist next year.

“It is important for business owners to pivot their offering and service if they are struggling and look for other ways to increase revenue. Reworking relationships with suppliers and clients will be particularly crucial during this time.”

“Interestingly, the SME Guarantee Scheme had low take up by businesses, despite providing access to additional funding and cheaper credit. This may be because business owners viewed loans as too risky this year – with widespread uncertainty due to the global impact of COVID and the recent US election, along with ongoing trade tensions with China. This has forced many industries to look to alternative markets. Business loans may prove more useful next year as business owners begin to focus on pivoting and recovering. Once Government assistance is wound back, however, businesses may consider other avenues to access finance. Money.com.au offer a range of loans for businesses of all sizes, from bank and non-bank lenders, that many will find beneficial over the next year.”

The full survey results, including breakdowns across organisation size, State business is predominantly based, and years in operation, can be found here: money.com.au/government-stimulus-impact-on-business-study