Bunnings has reportedly defended the use of its facial recognition technology on customers saying it is “comfortable” that its use of facial recognition is “undertaken in accordance with the requirements of the Privacy Act”, an ACS report has found.

Revelations of the facial recognition technology came about in June when consumer group, Choice, found that three major Australian retailers were capturing biometric data of customers without consent, according to the report.

Published on the Electronic Frontiers Australia’s (EFA) website was an email exchange between EFA Chair Justin Warren and the Bunnings Privacy Team.

“This consideration has extended to reviewing the [Office of the Australian Privacy Commissioner] OAIC’s previous determinations regarding other businesses’ use of facial recognition technology for other purposes,” Bunnings said in reference to the OAIC’s finding that convenience store chain 7-Eleven had wrongfully collected faceprints of customers 1.6 million times, according to the report.

Bunnings went on to explain that its facial recognition software, which is attached to CCTV systems, is used only utilised to enforce bans on customers. Facial images of targets were only stored by the system to ensure that if a banned customer entered the store, the CCTV cameras can immediately notify staff or security. 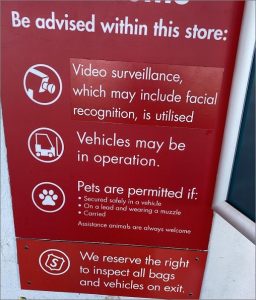 However, Mr Warren pointed out in the post that what Bunnings was doing was comparable to taking a fingerprint of every customer as they enter the store and checking it against a file of previous fingerprints.

“The fact they then throw away that piece of paper is not the problem, it is that they took the customer’s fingerprints in the first place. In fact, what Bunnings is doing is worse because the fingerprints are created surreptitiously and without explicit customer consent,” Mr Warren said in the report.

Shortly after the original Choice report, a Redditor posted a photo of a sign outside a Perth Bunnings store that appears to have been updated with a sticker that says “video surveillance, which may include facial recognition, is utilised” in-store.

Since the findings, Choice has also submitted a formal complaint to the OAIC reporting that retailers may have breached the Australian Privacy Act through their use of facial recognition, according to the report.

The formal complaint indicated that, “retailers have broken Australian Privacy Principles 1, 3, and 5 which relate to the companies’ privacy policies, the reasonable collection of sensitive personal information, and obtaining consent from people whose faceprints were gathered.”

Choice’s Senior Campaigns and Policy Advisor, Amy Pereira, said in the report that, “Choice is concerned that the retailers’ practices related to their use of facial recognition technology pose significant risks to individuals.”

“The social and economic risks include invasion of privacy, misidentification, discrimination, profiling and exclusion, as well as vulnerability to cybercrime through data breaches and identity theft,” she said in the report.