It’s easy to feel overwhelmed by the dimensions of Koelnmesse, sprawling as it does along the Rhine River’s eastern banks in Germany’s fourth largest city. From the outside, it’s not impressive building architecturally. It’s more a mass of windowless red bricks piled high and stacked next to each other as 11 halls that could, to those with vivid imaginations, have been designed to contribute in some way towards the German war effort early last century. In fact, the buildings first opened for business in 1922 and were purpose-built as a trade fair venue in a bid to attract commerce to a city trying to restore its economic supremacy within Europe.

On this occasion, from February 28 to March 3, seven of the 11 halls were occupied by hardware manufacturers separated into the categories of Tools, Industrial Supply, Fastening & Fittings, Locks & Fittings and Home Improvement. To my novice eye, it was an impressive gathering. But to veterans at the show, the turnout was a disappointment. Time and time again, those who I spoke to regaled stories of how all 11 halls were filled during the Hardware Fair’s halcyon days a decade ago. Then, as one, many of the large tool manufacturers – Makita, Ryobi, Bosch, Black & Decker – decided to pull out so they could refocus their efforts towards end-users instead of trying to woo the 56,500 trade visitors who attended the Hardware Fair this year. When I put this observation to Koelnmesse Vice-President, Metin Ergül, the man in charge of running the event, I expected him to dance around the question, firing statistics at me that paint the show in a more favourable light to that which I was hearing. Instead, he outlined how Koelnmesse deliberately changed the concept of the show from that which was held just two years earlier – in 2008 – after suppliers voiced concerns that much of their time was being wasted by having to deal with queries from public visitors not involved in the hardware industry.

“We closed it to the public and cut out the DIY focus to concentrate on the traditional core groups – tools, fasteners and fittings, locks, etc. Trade shows are more specialised now, which is a demand from suppliers and buyers. They wanted a clearer structure, a clearer focus.” All good in theory, but has it worked? “We’re really happy that we did that, because we’re getting very good feedback as a result of it. Big industry suppliers – from the motoring and construction sectors – never used to focus on the hardware shows. Now we have very interesting buyers for our suppliers, and they’re very happy with that.”

There was only one way to verify Ergül’s claims, and that was to canvas the exhibitors themselves. I scanned down the list of 2,686 suppliers from 52 countries, marked off the four Australian companies – Absco, Bordo International, Demain Technology, Kevron Plastics – and headed off to visit them. Without exception, all believed that having a stand at the Hardware Fair was worth their time and expense. “It’s been chaotic,” says Bordo marketing consultant, Phillip Johns. “It’s our first year here and so far, it’s exceeded our expectations.”

I kept bumping into Johns whenever I passed by Bordo’s stand in the centre of Hall 10.2. I was hoping to have a word with Bordo’s managing director, Iain Brown, who was forever unavailable because he was always in meetings with potential clients, so much so that I abandoned trying to catch him and called him at his office in Scoresby in Melbourne’s eastern suburbs after we’d both returned from Cologne. “From our point of view,” said Brown, over the phone, “there were only slightly fewer visitors but many fewer exhibitors, so they had a lot more time to look at something new. “We made a lot of new contacts, and they seem to be solid contacts – people looking to make a move – and if it does go ahead, there will be some reasonable size business [for us].” On the opposite axis of Hall 10.2, those manning the stand for Victorian-based Demain Technology were similarly run off their feet by persistent enquiries about their products. Demain took the cost-saving step of sharing a booth with Batavia, their European distributor, which they found handy for the Dutch company’s local contacts and ability to source contractors to erect their stand at the show.

Ironically, Demain hadn’t yet secured Australian distributorship for many of their products on display, but that doesn’t mean Australian buyers in Cologne weren’t interested in what they had to offer. Representatives from some of the big Australian hardware groups were some of those receiving demonstrations inside a purpose-built internal ‘laboratory’ deliberately hidden away behind Demain’s display area.

Managing Director David Scrimshaw was locked away in that very booth demonstrating a practical solution for home power tool storage to potential distributors, in Australia and abroad. Since the product is yet to be officially released, I’m unable to reveal what it is, which demonstrates another advantage of travelling to the Cologne for the show – to get the jump on competitors.

”We’ve been blown away [by the level of interest we’ve had at the show],” explains Daniel Hooper, product manager at Demain and one of four Demain employees manning the stand. “We’ve probably got a 90% hit rate on what we would expect from the presentation.”

Of the four Australian companies, three were first-timers feeling their way. The only Australian company to buck that trend was Kevron Plastics, whose general manager, Paul Metz, is a veteran exhibitor at the show. Kevron first opened a stand at the show in 1998 after attending for many years as a visitor.

“We used to come over here and arrange to meet our customers in restaurants and cafes all day. It just became easier to get a stand, so now they all meet us here,” says Metz, spreading an arm out in reference to his colourful display area, where plastic key tags and identification badges hang neatly on the walls in pre-packaged displays. Many of Kevron’s 30-plus importers are northern European, each of them with different needs. Metz explains how the Italians and French are particular about the colours they order because of their association with bereavements and the like. Others are pedantic about the quantity of key tags filling a plastic bag or see-through tub, and by having a presence at the show, Metz is able to iron out exactly what it is they require much easier than if he had to traipse across the continent.

Kevron had the advantage over the three other Australian companies of knowing what worked and what didn’t when it came to designing the outlay for its stand. After so many years, it was tried and tested. “We provide the platform, and it’s up to the individual companies as to how they represent themselves,” says Koelnmesse’s Ergül. “There will always be companies who may not be happy with their results from the show, but how much can they blame the organisers?

“Some of our exhibitors have been here with us for 30 years or longer. We have a very open way of dealing with each other, which is very important for us because we get an unfiltered input that we can then use for our conceptual decisions for the future. They’ll ask us, ‘What can we do better?’ And they’ll tell us what we should change.” From what Absco’s David Read was telling me, they’d be loathe to change a thing. When I initially approached the garden shed company’s head of marketing at its tiny stand in a dimly-lit part of Industrial Supply Hall 4.2, he was on a high, having just cracked the US market for the first time through a distributorship deal with hardware group Menard’s. Admittedly, I was fortunate to find the Absco stand at all. They weren’t listed in the official program, and I only sought them out on the advice of Koelnmesse’s Australian representative, Philipp Lischke.

“We signed up last minute when we found out a Chinese competitor who is copying our products was going to be here,” said Read, by way of explanation. Prior to the Hardware Show, Absco concentrated its European marketing efforts on the spoga+gafa show – also run by Koelnmesse – later in the year. Spoga+gafa is geared more towards the gardening and leisure industries, but Read felt “there was a need to offer our sheds to a wider hardware audience, and not just garden”. By all reports, it had proven a wise move, which is exactly what each of the three other Australian companies were thinking about their decision to have a stand at the Hardware Fair. Bordo’s Iain Brown said he would “almost certainly get a stand again”, even though nothing concrete had been signed with any of the new contacts they made in Cologne at the time of AHJ going to print. “That level of interest, even if it was half that, would be worth signing on again,” he said. 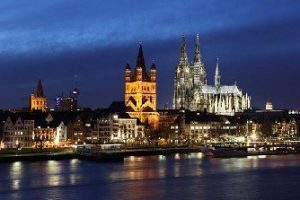