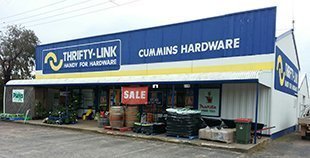 A dramatic spate of events in the lives of Troy and Tarnya Branson culminated in their winning the SA Thrifty-Link Store of the Year 2012 award.

When Cummins Hardware won the SA Thrifty-Link Store of the Year Award at the 2013 Danks National Conference, it wasn’t simply a validation of Troy and Tarnya Branson’s hard work and business savvy, but in many ways, a morale boost they badly needed.

“The past four years have been a rollercoaster ride for Tarnya and myself as we had experienced the highest highs and lowest lows in our time together,” says Troy, recounting a series of events, that he believes has enough dramatic fodder for a soap opera.

What began on a celebratory note in 2009 – with the high school sweet hearts’ marriage – took an ugly turn a year later when Tarnya met with a horse accident that nearly claimed her life. The incident left the enthusiastic rider with broken ribs, a punctured lung and a massive abscess on her liver. After spending nearly three months in hospital, and while still recovering from the trauma, she became pregnant. Amazingly, the pregnancy helped in healing the abscess and advanced Tarnya’s recovery – giving rise to their newborn daughter Jordan being dubbed “the miracle baby”. This so-called “double high” moment was then interrupted by another low point. Troy was diagnosed with a bulged disc – which was traced back to a severe whiplash injury he suffered as a youth, then sidelining an otherwise promising football career. The former Port Adelaide Magpies player had to undergo a major operation for the progressively debilitating condition. It was around this time that Troy and Tarnya were getting ready to purchase the Thrifty-Link Cummins store. The former business owners, being Troy’s parents Russell and Beverley Branson, extended the takeover deadline, to allow their son time to recuperate.

Fortunately, the yo-yo season ended the way it began, with a joyous occasion. Winning the Danks award was remarkable in how Troy and Tarnya managed to pull it off in their first year as new store owners. Thrifty-Link Cummins first won the award in 1997 under the stewardship of Russell and Beverley, but the accolade remained elusive for 15 years, until the younger Bransons ended the long void this year.

Russell and Beverley had been operating the business since 1987. The site on Thumby Bay Road had, prior to them, served many trades; first as a fuel depot, back when 44 gallon drums were still around, then headers and tractor sales, followed by a general store. The elder Bransons converted it into a hardware store, and over time, built a reputable business known for its cleanliness, layout and range of products.

Cummins is a South Australian town on the Eyre Peninsula – 67km north of Port Lincoln, the coastal city reputed to have the most millionaires per capita in Australia. That city gets its main income from sheep and grain farming. The store is located on the corner of the busiest street in Cummins; only a railway track separates it from the town’s main intersection. The unblocked site means that the blue and yellow façade stands out prominently with optimum exposure from all facings.

Operating in a town of 800 people where “everybody knows everybody” and looking after the hardware needs of a large farming population in the outlying regions (bringing the tally to 4000 locals), Troy and Tarnya knew from the onset that having strong ties with the community would be a huge asset.

Troy has always been an active member of the Cummins community, which he grew up in. The first lieutenant of the Cummins Country Fire Service (CFS) and local footballing star is well regarded for his affable and helpful nature. “The locals trust me, because they know if they crash their cars, it could very well be me pulling them out,” he jests about his volunteer work with the CFS. Tarnya is also a familiar face in local riding shows and hunting circles.

“They are very approachable and likeable people,” says Lou Parente, Danks business manager, who looks after the store’s Thrifty-Link account.

“They’ve got a great attitude towards their business and customers – maintaining that overall relationship is a big thing for the small community.”

His and Hers department

As much to find the right products at the right price, locals come to the store for ideas and knowhow. And they know exactly who to look for: Troy for “nuts and bolts” hardware-type issues; and Tarnya for gardening tips and tricks. Troy reckons he handles between six and 10 requests per day to assist with customers’ projects. Going beyond his store responsibilities while extending that boy-scout friendly persona, he can sometimes be found working on those projects after business hours.

I get a great buzz helping people out. We work hard in making sure every customer is greeted and helped as best as we can. We create a relaxing atmosphere where they can freely ask questions and not be shy about it,” Troy elaborates.

“In an ever increasing big box dominated industry, personalised advice on how to get the job done is hard to find.”

The majority of business comes from DIY customers, from those hooking up large workshop sheds to others making small improvements to their homes. Rainwater harvesting projects provide a major source of income for the store as farming residents do not have connection to the main water supply. Some of the best-selling items are stormwater, pressure and poly pipes – particularly during summer where pipework repairs are frequent.

Troy credits Tarnya for expanding the store’s garden range, saying the green department has been doing particularly well in recent months. A personal fitness trainer in her former life, Tarnya has been picking up gardening tips from speaking to horticulturists around the district and garden product suppliers. Tarnya has developed a keen appreciation and knowledge for nursery products, in respect of the region’s green laws and environment, says Lou, whose own grasp of the local climatic conditions also helps to influence her garden buying decisions.

Troy’s broad and varied experience in hardware had been honed working for companies like Corinthian Doors, Interior Joinery and Furniture, Parkholme Hardware, Eyre Roofing and Sheds, Hi-Fert, and Landmark, as well as various labour hire companies. Helping out at his parents’ store all those years further enhanced his retail sensibilities. Working alongside dad, Troy also contributed to the physical expansion of the Cummins store. It was a gradual process that took over 10 years, adding some 30 metres to the building’s depth to cover approximately 1500 sqm in floor space. The work experience, Troy says, was priceless. Hands-on knowledge of tools, materials and processes gives him the big picture on what customers need for various projects, while streamlining his own stocking options.

By the time the product sits on its display, Troy says it would have been sieved through his tough selection process; imbuing the “I don’t sell what I wouldn’t buy myself” criteria. Given his wall-to-wall merchandise, spread across eleven different size aisles, every new product line that makes it to the shelves, Troy explains, would be displacing an existing one. The rationale for stock replacements are largely based on customer interaction, what goes through the till, and the prevalence of old price tickets.

Buying predominantly through the Danks warehouse, Troy and Tarnya have, since taking over the business, substantially beefed up stock levels. Troy believes that the group’s buying power allows them to price compete on equal or better footing – even with the big box retailers. Customers, at first sceptical of this, have returned from shopping trips to Port Lincoln, and commented on the Cummins store’s cheaper pricing.

Stiffer competition, however, has emerged from the online “e-tailers”. The store operates as a collection depot for a local freight company, which provides the Bransons telling “intelligence reports” on the items that locals are buying online, some of which they also stock. Troy notes a growing trend towards online purchase of outdoor living products like wicker furniture and BBQ grills.

Admitting that it is difficult to match price with many e-tailers, if only because goods transacted online tend to bypass custom taxes and duties, Troy is convinced that offering after-sales and back-up service remains a major point of difference. He remarks proudly how he managed to convert customers through this service; and not just the online shoppers.

“Over the years, many customers have started driving past us to Port Lincoln. By offering the necessary sales and product support, the old customers, some of whom this shop has not seen in five to 10 years, are re-appearing at our doorstep.”

Troy acknowledges that the time was ripe for new leadership to run the store when they took over. Now 18 months later, armed with the prestigious Danks award, the Bransons remain grounded about their achievements: “We’re slowly chipping our way back.”

“Winning the award was a massive compliment but we also paid for whatever success we have through much sacrifice, especially in terms of our social life.

“That said, I believe if we do the hard yards for three to five years, things will only get easier.”