While America is home to the world’s largest (by far) retailer and the two largest home center chains, it is two retail chains from the United Kingdom that are dominating retail markets in developing countries in both Europe and Asia.

The two are Kingfisher and Tesco. Kingfisher is parent to B & Q and Castorama, while Tesco is a supermarket operator now aggressively moving into non-foods through its hypermarkets and Tesco Extra stores. B & Q is the market leader in the UK DIY market, and Castorama is fighting it out in France for #1 with Leroy Merlin. Castorama was #1 in earlier years. 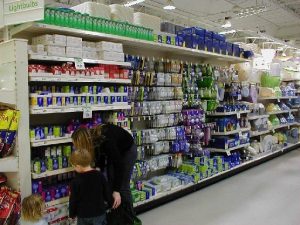 Kingfisher’s international expansion is taking place under both banners, although most often, the B & Q name is used.

In Russia, however, where the company has opened two hugely successful stores, it is under the Castorama name.

Kingfisher’s overall sales reached $16 billion last year, and results recently released for the beginning of its new fiscal year show the biggest sales gain of the past several years, ranging from 11-16%, depending on region. Its international sales logged the highest sales gains. In all, the company is operating 700 stores in 11 countries. It is the dominant chain in Poland, Italy, China and Taiwan, in addition to its home bases of France and the UK.

Other countries in which it is active include South Korea, Turkey, Russia and Spain. It also has a joint venture with Germany’s Hornbach involving 120 stores in European countries. It boasts a very strong presence in China with 54 stores, having established its own successful base of stores there and then taken over the unsuccessful OBI stores established by the German chain. It is operating 21 stores in Taiwan and 10 in Turkey.

While it currently has only two stores in Russia, the company is so heartened by the impressive sales rung up in those two units that it intends to expand beyond Moscow into St. Petersburg and other major Russian markets.

Meanwhile, Tesco, which is England’s supermarket leader, is operating in 12 international markets and is generating half of its £7.6 billion in sales from outside the UK. What Tesco has done internationally is tailor its retail stores to local conditions and needs. It is operating a multiple of formats, ranging from smaller “convenience-type” stores to supermarkets and hypermarkets. Its supermarkets include some non-foods, but its hypermarkets are much stronger in non-foods, including categories which put it very much in competition with Kingfisher units in some of the same international markets – such as barbecue, outdoor living and garden supplies.

Its Extra stores are particularly strong in non-foods, and have enjoyed such strong growth that the company is expanding this division aggressively. What will be most interesting is to watch developments in the world’s two most populated countries – China and India, as these two UK firms battle with Wal*Mart. Wal*Mart already is a major operator in China and recently made on offer to acquire Trust-Mart, another big domestic chain. Both Wal*Mart and Tesco are planning to enter the Indian market via joint ventures with local firms.

B & Q will soon be facing competition in China from Home Depot, which recently bought a local chain, Home Way. Home Depot’s international record is spotty. It succeeded marvelously well in both Canada and Mexico, achieving #1 market share in both countries, but failed in its attempts to enter the Chilean and Argentine markets.

With its purchase of Home Way, it should have acquired local talent for which it can provide growth funds at a rate faster than Home Way could have developed them on its own. Two other successful Chinese chains add further complexity to the battle for market share in that fast-growing country.

Later this year, Tesco will be invading the United States by opening its convenience format, Fresh & Easy, in southern California, Nevada and Arizona markets. Local groups have stymied Wal*Mart from expanding as rapidly in southern California as it wanted to, though it does have a major presence in the other two states. Wal*Mart already competes with Tesco in the UK, having bought the Asda chain there several years ago. Asda is #2, but quite a laggard compared to Tesco’s #1.

It will be most interesting to watch these battles as they develop in markets where US and UK firms seek international growth.