After cutting down on housewares retailers are showing renewed interest. Bob Vereen reports…

Years ago, many hardware stores in the United States carried housewares as one of their basic categories. The addition of housewares made hardware stores a better destination store for consumers, with special attraction to women. This was especially true in smaller towns and suburban areas in which hardware stores were among the larger, more important retailers. In these areas especially, housewares sections were convenient, one-stop outlets for family shoppers. That changed, primarily because of Home Depot’s sudden growth, which concentrated so heavily on male shoppers with massive displays in a warehouse setting of tools, hardware, electrical, plumbing and so forth.

To more effectively compete with Depot and the resurging Lowes home center chain, hardware stores cut back on or eliminated housewares in order to devote more space to the categories with which they competed with the two home center chains. They felt they had to be perceived as experts in male-oriented merchandise, even though their stores were not as large or as massive. Not only that, but the growth of mass merchants such as Wal*Mart, Kmart and Target, which also stocked housewares, further encouraged retailers to stick to basic hardlines because these other stores promoted housewares so heavily. 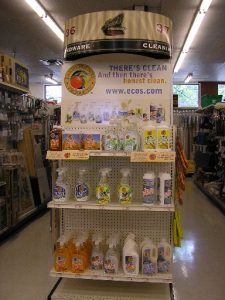 However, in the last several years, hardware stores are beginning to stock some housewares products again, as they realise that female shoppers must be courted more aggressively. The emergence of so many female-headed households encourages that trend. Many women find warehouse home centers intimidating and, especially in Depot’s case, sometimes messy.

The kinds of housewares now being stocked by hardware stores, however, are changing somewhat. In many cases, basic housewares categories are being left to the competition—low-end kitchen gadgets to supermarkets; small appliances to mass merchants and specialty appliance and electronics chains, while hardware stores and some home centers focus on housewares categories like storage products, outdoor cooking items, cleaning supplies. Painting departments that are updated with more emphasis on style and color also appeal to female customers.

While storage products have always been carried by hardware stores, a renewed and improved merchandising and marketing focus on them, aimed more at female customers, is improving their sales performance. Retailers also understood that more flair is needed in their presentation to attract female customers. An excellent example of merchandising housewares with flair is Restoration Hardware, a publicly owned chain, which uses intricate displays to attract women customers. In effect, many hardware retailers and independent home centers are turning their stores into specialty retailers, building strong departments out of categories which are being neglected or routinely handled by larger competitors. Interestingly, while independent stores are putting emphasis once again on housewares, Home Depot, Lowes and Menards are also focusing more of their attention and merchandising efforts on housewares.

Menards, because it operates big stores but not warehouse-formats, can appeal to women and, with its size, is able to display categories like storage much more effectively than smaller units. It is even beginning to stock some food items to appeal to females even more strongly.

Lowes, with its neater, cleaner stores than Home Depot, is generally acknowledged to be more female-friendly than Depot’s somewhat messy warehouse units. That may well be why Depot is trying so hard now to soften its image and improve its reputation. Under its new CEO, Frank Blake, the company seems determined to improve its in-store service and materially upgrade the looks of its sales floors. Its efforts so far, surprisingly, have already earned it recognition at the recent International Home & Housewares Show for its housewares sales and merchandising efforts internationally—in Canada, Mexico, Puerto Rico and the Virgin Islands.

Retailers are learning that some old concepts will work in today’s modern and competitive world when tweaked and given a different appeal.