With the Internet is no longer a mystery to most consumers, US retailers are learning to take advantage of the online market. Bob Vereen reports…

It’s not just Amazon and a few others that have reaped sales off the Internet. Thousands of smaller retailers, including many independent hardware, home center and lumber-building material retailers are generating as much as 20% of total revenue from Internet sales.

How do they do it? In one sentence, the secret is: offer something unique. That explains why Williams-Sonoma, a housewares chain, is doing almost $1 billion in Internet sales. It features unusual items, not just common everyday items that consumers can find in local retail outlets. The same thinking is also behind the growing web sales for many independent hardlines retailers.

Among chain retailers, Wal*Mart and Home Depot are considered among the most successful web merchants. Retailers who wonder what works might want to check them out, too. In January 2007, Wal*Mart had 3.6 million name searches on the web and Home Depot had 2.5 million. Most retailers began building web sites as a defensive measure – they thought they ought to have a site, and focused mostly on providing information about their location, store hours, and maybe a broadly defined inventory range. Few felt that Internet sales would be a major sales factor – after all, they were a “convenient” outlet and most of their business came from customers within a three to five mile trading radius. Why would anyone buy on the Internet when it was so easy to drive to the store, shop for the product and take it home immediately?

Continued improvements in software, such as Adobe’s low cost Contribute, have made it easy to create and maintain web sites. Retailers can now easily change items and prices on their sites, allowing for new item introductions, seasonal lines and outstanding bargains. Not only that, but they can feature unusual items not stocked by most stores. The important thing is to have one’s site designed in such a way that it gets maximum visibility and listing on search engines. When someone is looking for a product by category, brand name or other definition, the site will be among the earliest ones listed. There are two ways of going about increasing one’s presence on search engines – paid for and so-called “natural” rankings. Paid efforts are mostly used by large companies, not by smaller merchants. The key factor is to list all the key words that describe one’s site and business so that when a browser types in those words, the search engine will relate those words back to the site. According to recent research by Internet Retailer magazine, 81% of web site operators write and rewrite key word descriptions to enhance natural rankings on search engines, and 68% include actual phrases. 58% include common product keywords. The magazine also reveals that 70% of all site traffic is generated by natural search rankings.

Gertens, a lawn and garden specialty retailer in Minnesota, went online in 2000 and immediately offered products for sale. At first, fewer than 500 products were offered, and it wasn’t until 2005 that the company decided to make a more determined effort to boost web sales. Five years after going online, web sales were less than $50,000. After the site was redesigned in mid-2006, sales more than doubled to almost $100,000 and in early 2007 sales continue to grow. The new design emphasizes the uniqueness of its inventory, and updated search engine information increases the site’s visibility and ranking.

More than half of the site’s visitors come through search engines from visitors who search for specific products. Local sales are primarily gift cards and bulk items, with only a handful of such orders from outside the firm’s regular delivery area. However, some of its most unusual (and not very bulky items) have been sold and shipped all over the U. S. and occasionally include international sales too.

However, a problem facing retailers is what to do about shipping costs. Some retailers offer free shipping, especially for items above a certain sale price. Gertens offered free shipping for a time after their site was redesigned but now plan on offering a flat fee, depending on the product or weight. Some major retailers like Amazon offer free shipment, so the shipping cost becomes a factor in a consumer’s choice of web outlets.

Richard Wilson and Paul Whitehouse, owners of Harold’s Home & Hardware in Wilmington, North Carolina, was another retailer who’s web site was so successful that they launched a new business to help other independent retailers. They now serve 34 hardware stores, among them some from Ace, True Value and non-affiliated stores. Their new business, Open Vista Retail Services, works with Activant Solutions, a major retail systems provider in the hardware/home center industry in the U. S. With this system, visitors who participate in the store’s site can order items not actually stocked in the store. They then either pick them up at the store a few days later or have them shipped. “Web site orders are generally not expected to be available immediately, so a short delivery delay is acceptable,” says Richard.

Ace Hardware, America’s largest wholesaler, is also using the web now to help consumers find the closest of 4,300 Ace stores. The newly designed site automatically identifies the visitor’s location and with one click provides a map showing the locations of Ace stores nearest that web site visitor. Do It Best Corp., America’s second largest wholesaler, also uses its web site to help member retailers by providing an on-line store for them. This is reached through each individual retailer’s site, which takes visitors to the Do It Best inventory, but still makes it seem as though the visitor is at the individual store’s site.

Retailers that aren’t fully utilizing the Internet to generate sales are missing an opportunity. In a recent Internet Retailer editorial, the publisher pointed out that changing demographics, growing computer sophistication and hurried lifestyles of shoppers will lead consumers to use the web more and more to check out merchandise and buy online. Even high gasoline costs are playing a part as consumers evaluate the costs of driving from store to store to find what they want. 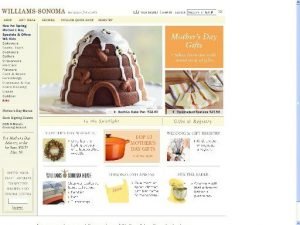