Strong branding, a less than favourable housing market and the prevalence of new and accessible technology are all affecting the tool market. Tom Prince investigates…

State of the industry

According to the 2007 Hardware Suppliers & Industry Directory, the builders’ hand tools category has not experienced significant growth in four years, while the power tools and accessories category grew only 0.5% last year.

Numerous economic factors are at play here. With hand tools, this is due amongst other things to the ever increasing availability of affordable imports (see the ‘Australian Made’ feature in the Hardware Journal May issue for further information) and an overall tougher retail environment. With power tools and accessories, increased ranges, promotions and consumer-appealing price competitiveness means the retail/DIY channel took a slice out of the trade share. The state of the housing industry also has an inescapable effect. According to Harley Dale, HIA’s Chief Economist, Australia’s currently flat housing market is being prevented from recovering by Government imposed barriers such as fees, taxes, charges, planning and regulatory constraints and the lack of available and affordable land – and with it, the accompanying tool market. In places like inland NSW and Sydney it has apparently not been this bad since the early eighties recession. In fact, there is a lot of migration to the west to chase dollars from the mining boom, although the best part of that appears to have passed since 2005, with the peak of the mineral boom passed. The decline or flat performance in the building industry has had a negative effect on the demand for labour, and with it, the demand for tools.

Tradies are a curious bunch. As industry professionals, their work depends on the tools they use to get the job done (regardless of the age old adage about a good tradesman never blaming his tools…). Their tools are their livelihood so they really do need their tools to be reliable, of high quality, and useable in demanding working conditions, such as on site or in inclement weather.

Even so, your average tradie tends to be far more brand loyal than your average DIYer. Indeed, for all the jobs that tradies do with highly specific requirements, a recognised brand is still the main influence on decision making in a lot of cases.

Strong branding is a powerful force, especially for power tools, where particular brands are sought after if they are perceived to offer quality, a defined ability to do the job, and most surprisingly, a positive image. With hand tools too tradies are demanding a lot more than the basics. Some manufacturers and suppliers face a challenge in overcoming the tradie’s fierce brand loyalty to a known product, so many of them are offering something different or something new.

New technology, now cheaper and more readily available than ever, is having an impact. Power tools are experiencing the change with many people switching to cordless tools. The availability of technology that was traditionally inaccessible or prohibitively expensive means many traditionally ‘trade’ products are also more accessible to DIYers. For example, compound mitre saws used to be the domain of professionals but are now available to DIYers. New forms of power are also emerging. Again, this follows in the vein of categories branching out that were at one time exclusive or limited to certain professions. Air tools, many of which were traditionally used in the automotive industry, are now available in most ranges across the board. So too are gas powered tools, particularly nail guns, which were formerly used mostly by roofers.

Ion battery technology is another exciting development that was quickly adopted. It offers a swathe of improvements in the form of quicker charge times, longer tool life and even greater user comfort owing to their light weight. Ion battery drills are at the high end of the market and it remains to be seen what effect they will have if they start to filter down once the technology becomes even more prevalent.

Finally, an interesting bi-product of cheaper and more accessible power tool technology is their effect on hand tools. Some power tools are now so accessible that they are exerting pressure on certain sections of the hand tool market by virtue of their comparable affordability. When it comes down to it though, some things will never change. As one manufacturer put it… “You will never replace a hammer.”

Powermaxx Lithium Pro: Lighter, Stronger, Longer Metabo is proud to introduce the new Powermaxx Lithium Pro, a compact, lightweight cordless drill driver that can handle just about any job. It is the fastest screwdriver drill in its class which makes it ideal for assembly, disassembly, maintenance, metal and timber drilling.

Its powerful 7.2 volt cordless drill driver utilises a 2.2 Ah Lithium Ion battery which means you can drill for longer. It weighs up to 40% less than other battery types and it will perform for up to 40% longer as well. This means more work per charge than with NiCd batteries. The ergonomic rubber coated handle also makes the Powermaxx comfortable to hold and easy to use.

The Powermaxx is equipped with a 2-speed metal gearbox, a new and much stronger air cooled motor that powers through any job, 20 adjustable torque settings, spindle lock for easy fitting and removing of a chuck, and a variable speed trigger with soft start and brake for ultimate control. It comes with loads of standard extra features which means you have all the tools to get the job done. These include: 2 x 2.2 Ah Lithium Ion batteries; an LC 60 charger; a right angle attachment that rotates 360° for those hard-to-reach places; a metal keyless chuck that screws directly into the machine; and a 20-piece assorted bit set that includes screwdriver bits, torque bits, and posidrive bits that are stored in a handy magnetic bit holder. All of this fits into the carry case so that you can store the Powermaxx Li Pro and all its accessories without hassle. 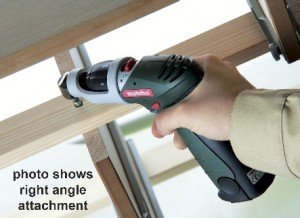