Innovative new products were one of the main attractions at the 2007 National Hardware Show. Bob Vereen reports…

Retailers, agents and distributors from around the world gathered in Orlando, Florida, in early May at the National Hardware Show. They showcased an almost endless array of new products to entice consumers and commercial customers into their stores.

This year’s Show featured more than 3,500 manufacturers. They ranged from trusted national and international brands to old favourites, as well as hundreds of new producers. Indeed, the Show has become more than a “hardware” show. It featured homewares, an extensive lawn and garden section and even sections devoted to gourmet cookware and home textiles, something which affirms the fact that many big-box retailers as well as smaller specialty stores now cater to women heads of households.

The Show was massive, to say the least. With more than 1,300 exhibitors from outside the United States, it is no longer a “national” show, but an international exhibition geared to meet the needs of buyers and agents everywhere. A treat for buyers was the fact that Show management made it easy to find interesting new items among the hundreds of thousands of items on display. This was done by having “New Product World®” displays prominently featured in each major section of the show. This year there were plenty of time-and-labour saving devices developed both by established and new-to market companies. Wise buyers looked for ways to differentiate their inventories from those of their competitors. This year, the smart way to shop the National Hardware Show was to visit these New Product sections, where the items were individually displayed and signed according to manufacturer and booth location.

Among the interesting items found in the “New Product World®” were: 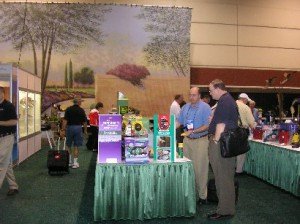