Located in South Australia’s beautiful Eyre Peninsula, Lincoln Rural Supplies CRT has grown into two stores over the last 21 years. Their 17 staff provide for the needs of 14,000 people across two outlets, located in Port Lincoln and Cummins (about 1200 and 200 square meters respectively). Farming clientele are counted as consumer and the ratio of consumer to trade business sits at approximately 85 to 15.

Both stores stock a small range of hardware but their major areas of expertise are agronomics and specialised water equipment. Indeed, far from being just a retail outlet, the guys at Lincoln Rural Supplies pride themselves on their expert knowledge. For them, expert advice isn’t something to just out over the counter. Instead, professional consultancy is a major focus.

According to Warren Dickie, Senior Partner, they first got into the consulting role about eight or nine years ago, at a time when several other companies were doing the same. Beginning this service in 1998, their one agronomist looked after 11 clients. It is a testament to the quality and expertise of the staff that out of the 33 existing clients – some of whom have been with them over several generations – almost all of the original 11 are still with them. “We would like to think that 90% of the people who we do advisory for are still with us,” says Warren. “We can control the controllables. We know what we have to do to kill weeds. But we can’t control the amount of water we receive,” he says in reference to the drought which incidentally hasn’t been quite so bad around Port Lincoln. It’s at least one reason why they’re not wholly reliant on the agricultural industry and have a significant input with all things water. A good example can be found in some of the projects around town. “We put a whole township under reticulated water,” says Warren. “We drew up and designed the whole scheme.”

If it wasn’t already apparent, top service is an essential part of the mix. “We always tell staff to address people in the way they were introduced,” says Warren. While this may seem like a minor point, the mere fact that it was mentioned is indicative of the care and diligence taken to look after their customers. The fact that almost all of their original clients mentioned are still with them goes a long way to show this.

As experts in the field (no pun intended) Warren also takes it upon himself to keep his customers informed. “I religiously do factual newsletters,” he says. “It’s not junk mail, it’s what people look for.” His topics may vary from animal health matters to public health issues but the common denominator is that the information they provide is relevant and highly sought after. It also helps bring back repeat customers. “The wider family and community have really supported us over the years,” he says. “We understand our clients’ needs better than anyone else. This is our major point of difference as a retailer and our whole philosophy for how we run this business and service our customers.”

Lincoln Rural Supplies recently installed a SYM-PAC retail management system. After many years of the ‘paper based chase’ as Warren calls it – writing invoices by hand – they felt that it was time for an upgrade. The new Debtors and Inventory Management system does pretty much everything they want it to including EFTPOS, payroll, creditors and general ledger modules. It also communicates with the other store. “What they [the other store] do we can see five minutes later. It makes things more efficient,” says Warren.

The transition to the upgraded system also worked comfortably well for their clients, with the only major change being the format of invoices. Things are a lot more efficient, and Warren sees a lot less pricing errors. “We’ve found a 90% reduction in the human error factor,” he says. “SYM-PAC has exceeded our expectations – it’s pretty good! No dramas! There’s a lot more to the system than what we originally thought,” he adds.

If the successes of the last 21 years are anything to go by then the future looks good. Second or even third generation clients will be there to support them and with their expertise in water systems Lincoln Rural Supplies is also looking into pumps as well as industrial material. One exciting field is in the area of reverse osmosis fittings on fishing trawlers. They’re also looking into building pump systems. “We’re looking to expand,” says Warren. 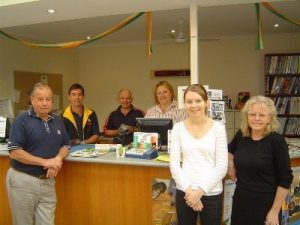