While Home Depot and Lowes capture most of the publicity about the American home building and improvement market, there are hundreds of other large retailers serving the professional side of the market who do so in relative obscurity.

They are the dealers whose primary customers are home builders, major remodellers and local tradesmen involved in housing. Their inventory is generally heaviest in the lumber-building materials categories, rather than the shelf goods featured so much by consumer-focused chains like Home Depot, Lowes and Menards.

The top 350 pro dealers enjoyed a 9% sales growth in 2006 and their sales reached $56 billion. According to NHCN, 119 of the 350 top dealers enjoyed sales gains while 77 had declines, with the remaining 154 experiencing flat sales.

It is an increasingly common trend in all types of retailing today to see a few giant retailers dominating the category. The top five chains in the pro field accounted for 35% of all sales, and while this is a significant share, it is much less concentrated than the conventional home center field, where the top three are dominant: Home Depot with $90 billion, Lowes with $50 billion and Menards with an estimated $7.5 billion.

Since many major home builders are now operating in different parts of the United States, there has been some consolidation of pro dealers as smaller local chains decide to sell out to larger chains. This is the result of them recognizing the fact that multi-market builders prefer to deal with suppliers with whom they already are familiar. Indeed, the top 10 dealers were very aggressive in their acquisitions last year, fuelling a sales rise of 18% in 2006. Nine of NHCN’s top 350 chains are billion-dollar retailers, with Home Depot’s HD Supply (recently up for sale) nearly reaching $1 billion with $985 million in 2006 sales. It ranked 10th in 2006.

Headquarters for these professional dealers range from tiny towns like 84, Pennsylvania (84 is the headquarters of 84 Lumber), to metro areas like San Francisco and Denver. Most firms concentrate their sales and marketing efforts on professional customers, but most also serve – in varying degrees – the more accomplished DIYers. Around 87% to 95% of sales come from the professional side of the business amongst the top five, while among the smaller chains in the top 350 list, the percentage of sales made to consumers sometimes ranges as high as 25%.

With housing continuing soft, the numbers listed above may change in 2007. Many pro dealers are feeling the pinch and are shifting their sales and marketing efforts to the consumer or to the smaller remodeling market. In some states, declines as much as 40% have been reported, the unfortunate result of a failing housing market and a subsequent need to shift sales efforts.

Numerous other differences can be found amongst these retailers too. Some dealers are much more specialized than others, sometimes concentrating on a limited number of merchandise categories like roofing and related products, while others carry much broader inventories. Showrooms also vary. Some can be very austere like those of 84 Lumber, which lack any pretense of being model showcases. 84 Lumber fixtures serve only one purpose and that is to hold merchandise so buyers can get it. Other dealers try to encourage trade-ups by presenting merchandise in attractive settings.

Generally speaking, dealers in smaller communities tend to serve a higher percentage of consumers. They also carry broader inventories since they cannot rely on specialist customers alone. As the accompanying chart shows, their sales-per-unit are higher, especially when it comes to sales-per-employee. Employees in these outlets are generally more knowledgeable, better trained and more likely to be permanent compared to consumer-oriented chains like Depot and Lowes, who employ many part-timers and have high employee turnover rates. 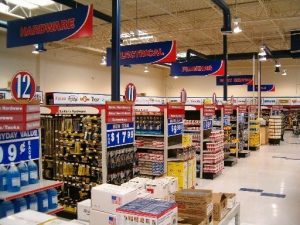