A multi-million dollar retail hardware operation that sells a huge inventory of non-electric appliances, stoves, tools and lights around the world is tucked away in an unincorporated community of 600 in northeastern Ohio. It is Lehman’s Hardware, a two-store chain originally serving the Amish communities surrounding Kidron and Mt. Hope, Ohio, but now also aggressively selling by direct mail and the Internet to customers everywhere. It also caters to thousands of tourists who regularly visit the main Kidron store.

The Amish believe in simple living without electricity or other modern innovations, so the store, founded in 1955, concentrated on finding products to meet the needs of its Amish customers. Its huge selection of wood heating and cooking stoves, for example, may rank as the world’s most complete assortment.

In the intervening years, Lehman’s Hardware discovered thousands of products like hand-powered kitchen appliances, water pumps, grain grinders, oil lamps and gas refrigerators. They also learned that campers and many other non-Amish customers would buy these products too. As the focus grew on finding and stocking non-electric products primarily for Amish customers, the company developed a worldwide reputation as the place to find these uncommon items. It now sells to all 50 states and to over 200 countries and is said to be the world’s largest seller of historical technology.

With its growing reputation, the store also became a prime supplier to customers like missionaries and doctors working in developing countries where electricity is often lacking. Lehman’s supplies many products to make life livable in these remote regions.

The main Kidron store consists of several buildings. More than an acre is under roof, including its latest expanded sales floor addition, a restored 1840s barn. The barn was painstakingly dismantled and transported across the state to be reassembled as the latest store addition. With its huge, hand-hewn wood beams and wood sideboards, it creates an historical setting for the pioneer artifacts on display as well as the merchandise for sale.

Although the store specializes in non-electric products, conventional products are also carried for the non-Amish trade. Interestingly, although non-electric items are sought and sold, the latest retail technology is employed to operate things efficiently. In fact, an outstanding web site at www.Lehmans.com is on offer, helping create sales around the world.

The main Kidron store also became a tourist attraction, partially due to national publicity in publications like the Wall Street Journal, USA Today, Newsweek magazine and the Los Angeles Times newspaper. To further appeal to tourists, the store’s pioneer look is enhanced through decorations like antique tools and other hardware-related items, ranging from pioneer bicycles to wooden shovels.

Lehman’s also issues a 168-page catalog featuring 1,000 or more items sourced from around the world, described as ‘authentic products that work for life.’ Virtually all are non-electric, it does contain a few electric items. The catalog is organized into nearly a dozen departments ranging from personal care to lighting, water pumps, filters, etc. Catalog circulation reaches nearly a million per year.

Over the years, the company has improved its catalog and now identifies new items, locally made items, best sellers, etc., with easily identifiable symbols to help customers browse the many items. Many of the countries from which product is sourced are also identified, such as Sri Lanka, Germany, Slovenia, etc. While many products are imported, the focus is not on Asian-made items.

In addition to serving the local Amish community, the store also helps the community economically as a recipient of many non-electric items ranging from stylish walking sticks to handmade wooden checker sets. Its main headquarters in Kidron now consists of three buildings. The retail area now comprises 30,000 sq. ft., and is supplemented by a storage and service center and corporate headquarters. The recently reconstructed barn nearly doubled its retail floor space.

Surprisingly, Lehman’s Hardware manages to source from around the world with only two buyers! They travel to trade shows around the world as they continually seek out non-electric items to add to the store’s ever-growing inventory. They buy from hundreds of suppliers, as well as two full line US hardware wholesalers.

Because it has become a tourist destination, the company wisely caters to these customers with snacks and drinks, as well as Lehman Hardware-decorated clothing items and other souvenir-type merchandise.

When the store opened in 1955, it was only 900 sq. ft. in size and served only the local community. Today it sells in more than 200 countries, issues a million catalogs that are nearly 200 pages in size, draws visitors from around the world, and is a multi-million retailing empire. 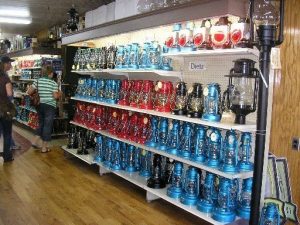