The affluent suburb of Malvern, just outside the Adelaide CBD, is an ideal location for a hardware store. Known for its gardens, its big houses and small blocks, the area has always enjoyed a lot of renovation.

It was here back in 1978 that Simon Stewart set up shop in partnership with the Coote family. First trading as Big H Store, they switched to the Mitre 10 banner in 1982 before the Stewart family finally took over sole ownership two years later.

These days you could say that things are still going well for Barrow & Bench Malvern (as are two other Barrow & Bench stores in Glenunga and Happy Valley). About eight years ago they were at full capacity, necessitating a move to bigger premises 500 metres up the road. Growth shot up to around 20 to 30 percent for several years until they neared capacity. The old saying ‘necessity is the mother of invention’ is quite apt in the case. Space considerations (or rather lack of space considerations) mean they have to think carefully about all stock – and the result is an efficient store with a knack for inventiveness.

Almost all business over the 1800 square metre floor is consumer with about ten percent being trade orientated. According to Manager Paul Stewart, the trick to getting his customers to come back is to provide them with solutions, rather than getting the maximum amount of money out of them.

“Dad always told us to focus on the basics and make sure you do them best,” he says.

“Make sure you give the best customer service, that you’ve got stock on the shelves, and that’s it all well presented.”

Gardening (plants and drygoods) has always been their top performer, accounting for around 30 percent of business, and as with so many other stores, they are fighting the drought as best as they can. Space limitations make it tougher though – they don’t stock as many water tanks as they would like to. The situation calls for some inventiveness, which means new ideas are often tried out.

“We’re always looking for more room,” says Paul. “We try new things although sometimes it doesn’t quite work out,” he concedes.

Far from sounding glum though, it’s an acknowledgment that they make they very best of all available space. “We do lots of little things,” says Paul.

One idea that really took off can be found in several bays dedicated purely to water conservation. In this department, relevant products are stocked alongside meaningful information, accompanied by trained staff. “A lot of customers get confused once they start talking about irrigation systems,” says Paul.

Paint has also been very strong for many years. Much emphasis goes into good stock presentation, and new TVs with looped product information were recently installed to make it even more captivating. “The big thing in paint is always having the right staff knowledge,” says Paul.

“This means we don’t swap people around. Customers come in and they get to know someone and they get that confidence. Everyone has their speciality.”

It’s worth mentioning that this customer confidence is not merely limited to the paint department. For example, the current nursery manager is in very high demand, so much so that she is regularly telephoned (and asked for by name) by anxious customers in need of expert advice. Garden nights with a guest speaker are also popular, and several are held every year.

“They only attract around 30 or 40 people but they are really really passionate about gardens,” says Paul.

The store also continues to support local groups like the Sturt footy team, the scout group (which holds a BBQ on the weekend), and local school groups. As you might expect, the parents are frequent customers and the store is essentially regarded as their local hardware store.

As for future developments, improvements big and small are afoot. They are in the process of taking on a dedicated merchandiser (“We always make sure we have stuff on the shelves,” says Paul), and adapting the store for the ever changing market, especially with water conservation. This includes training staff in a six month course relating to water conservation, revamping the garden department, and introducing lines of summer gardening clothes.

Lots of little things indeed, to reiterate what Paul said. 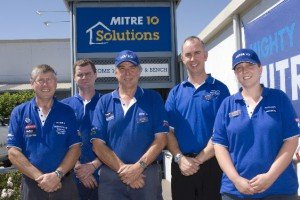