Nuriootpa is the Barossa Valley’s main commercial centre. Home to famous wineries like Penfolds and Wolf Blass, it is here that Juncken’s Home Timber and Hardware underwent a remarkable transformation after 112 years of operation…

When soon-to-be Prime Minister Ben Chifley visited Nuriootpa (current population: 3,500+) in 1944 he was so inspired by what he saw that he promoted the town as a model for community co-operation.

Located in the Northern Barossa Valley and surrounded by beautiful vineyards (vines even grow on some buildings in the main street), Nuriootpa does not lack in inspiration, nor is there any shortage of community spirit, with many of the town’s facilities funded and developed through community involvement. It is in these tranquill surrounds that Juncken’s Home Timber and Hardware recently upgraded to a fully fledged ‘proper’ hardware store after 112 year of business.

Juncken’s Home Timber and Hardware is a classic success tale. Founded as a simple cabinet making and undertaking business by Herman Juncken in 1895, the business moved to Nuriootpa where it operated as a building company base. Ownership passed to Herman’s son Carl in 1930 and to Carl’s widow in 1951 before finally being purchased by the store’s employees in 1985.

Initially catered for their own building crew, they expanded to sell to other builders and the local townsfolk. Two years ago they decided on a big move to new and better premises, which culminated in a grand reopening in December last year.

Bigger than before, better than ever

Juncken’s is traditionally a building business catering to the surrounding vineyards and wineries. The area is also quite diverse and there are a lot of new homes and extensions. Land, however, is not as cheap as it used to be, and new estates built on formerly beautiful vineyards have caused some.

Today, the store employs 15 staff over 2,500 metres of floors pace. The trade to retail split used to be around 70 to 30 but the new opportunities and the vastly expanded product range means this balance changes every month, and at the time of writing it hovers at roughly 60 to 40.

Paint has been one of their biggest departments and the added room has allowed for many improvements, like an expansion into Dulux, something they didn’t have before. Outdoor has also been a successful new area for the simple reason that there had never been room for it before, and there are currently six garden and outdoor furniture displays and eight barbeques. “When we opened towards the end of the [outdoor] season we were really amazed at the response we got,” says Michael Sheer, Juncken’s Hardware Manager.

“We’ve always dealt with these products through our catalogues, but we never had them on stock,” he says. “The enquiries have been really good because customers can feel and touch the product.”

A wholly new kitchen and laundry display setup also created a lot of new interest (particularly in flatpack kitchens), and they have a new garden centre that focuses heavily on impulse buying. “People don’t come here to redo their gardens, they’re coming here for the instant colour and the excitement,” says Michael.

“We’re not competing against the nurseries that are in the area so we therefore haven’t built a big garden centre.” Lines are changed every week to keep things interesting.

One big change for the way trade operates is the way it was modelled around a drivethrough. As with all things new and untried, the owners weren’t quite sure how it would work at first. However, they were quickly convinced once they discovered how effective it was for their trade customers picking up their cement and sheet products. Much of this was the result of close cooperation with Danks, and Michael says they couldn’t be happier.

“The Danks design worked out really well with their blend of trade and retail in the same building,” says Michael.

“We couldn’t praise them any more. They were involved from the day we bought the block of land. They then sat down with us during the original planning and after a few changes we were happy with the design.”

It goes without saying that a huge and at times painful effort went into the redevelopment scheme. As you might expect when taking a calculated risk, there were occasional moments of uncertainty.

“It’s been a challenge,” admits Michael.

“We were really taking a plunge into the unknown and we didn’t know what the reaction from the general public was going to be,” he says.

The gamble evidently paid off and business couldn’t have enjoyed a better start. “It’s a gamble because you don’t know who your customers are going to be or what your sales are going to be like. But don’t do it by half,” says Michael.

“We were originally going to do a small extension to the store but we decided to go for a whole new site. That way, you can design exactly how you like and your whole layout can be set up from day one,” says Michael. “Also, have a five year plan at least,” he adds. 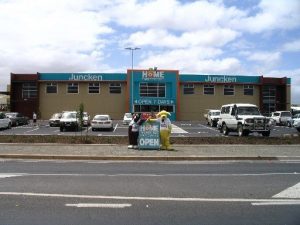