According to Wrights Hardware, heat stress is a significant problem in Australia, particularly in the mining industry where a considerable amount of activity occurs in remote regions that are often subject to high temperatures. Heat stress is a major cause of employee discomfort, resulting in poor decisions that reduce productivity and compromise safety, and it is now recognised as a significant workers’ compensation issue.

To make matters worse, hard hats significantly hinder thermoregulation of the body via evaporation because they restrict air circulation and increase the thermal load on the body. In fact, according to the Harvard Medical School, around 30 per cent of a person’s body heat is attributed to the head, which means that hard hats are a significant contributor to heat stress.

Hot heads don’t make for good working conditions, which is why WorkFlow™ from can help overcome this problem thanks to its unique cooling system for hard hats. WorkFlow™ is a rechargeable lithium-polymer powered cooling system that channels air into a hard hat’s cavity space. It uses an AutoFlow Micoprocessor Control Function to control a time-released blast of air, circulating air every four minutes for one minute. This allows the body to naturally regulate its temperature through evaporative cooling by using the body’s own perspiration.

WorkFlow™ is designed with a large air intake for maximum air flow and a large duct that evacuates air from the hardhat in a few seconds. The tube that channels the air by the fan is also made form flexible silicon, which means it’s comfortable to use. WorkFlow™ is also intrinsically safe, remarkably light, and easy to attach to any hard hat. It has no headband so the wearer can still attach cap lamps or ear protection without any trouble. It also comes with a universal clamp so that it fits onto any Australian hardhat. The battery is also self contained which means the wearer does not risk snagging on any wires.

WorkFlow™ is based on a successful US design that has been shown to lessen the risks associated with heats tress. It has been used abroad in several different industries and was re-designed specifically to cope with the extreme temperatures of the Australian market.

Wrights Hardware Pty Ltd is the exclusive agent for WorkFlow™ in Australia and New Zealand. The product is undergoing final testing and will be available in the last quarter of 2008. Wrights Hardware are currently seeking expressions of interest so email sales@nullwrightshardware.com.au or phone 1300 731 336 for more information. 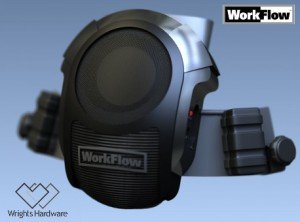