Danks invited more than 450 major trade members from Home Timber and Hardware, Thrifty-Link and key trade suppliers to Hobart’s Wrest Point Casino in late May 2008 to participate in a two day Expo and series of seminars.

Danks managing director Graeme Danks addressed the attendees on the second day with a detailed recap of progress to date. The seminar program covered topical issues including timber, building materials and plumbing category growth, trade marketing, the state of the housing market and Danks major initiatives and trade performance.

One of the highlights was the Trade Expo, staged by 59 key suppliers who gave Danks members the opportunity to review existing and upcoming products on a one-on-one basis.

This event comes at an important time for Danks and their suppliers as the group prepares to embark on an exciting new trade direction. Expect to see more marketing and a strategic expansion of Home trade business that includes industry partnerships and a comprehensive loyalty program.

The two day event culminated with a spectacular dinner during which special awards acknowledge the contributions of key suppliers. Awards were also issued for National Supplier of the Year 2008-09 and State Retailers of the Year 2007-8.

A fitting end to the jam-packed event was an address by Louise Padgett, a former Australian cycling team member who was seriously injured by a car during a training ride in an accident that also killed her team member Amy Gillett in Germany in 2005. Her poignant and deeply inspirational tale was a fitting conclusion for all attendees.

Visit www.hardwarejournal.com.au for loads of pics from the event! 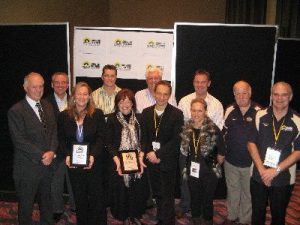