Total Tools Kilsyth is the pilot store for the group’s progressive expansion program.

Tool specialists Total Tools – or rather, ‘Total Tools Industrial’ as they used to be known – always excelled at servicing trade professionals and industrial customers. Some time ago the group predicted significant growth opportunities as a result of changes in the market, so they decided to steer their business in a new direction.

A strategic planning agency by the name of the DC Group was hired to oversee the change in direction. After conducting an extensive amount of research and analysis, one of the more significant changes was the re-organization of the group’s performance structure. “We engaged [DC] to help us undertake a strategic business review, which has substantially changed the structure – moving from a membership model to a more corporate model,” says Greg Heath, General Manager, Total Tools (keep in mind, however, that Total Tools members are shareholders in the company). Next on the list was the need to broaden their market in a way that would not alienate their core business. The stores needed to appear more accessible for less professional customers, so the term ‘Industrial’ was dropped from the banner.

“I think the term industrial implied a stigma, whereby if you were not an industrial tradesman, you could not shop here. The word ‘industrial’ and the way in which the stores were previously designed could have been intimidating to a customer unless they worked in an industrial field,” says Tony Soccio, Owner and Manager of Total Tools Kilsyth. Finally, the group had to expand its physical presence, not to mention test the new strategy. A suitable location was needed and the outer Melbourne suburb of Kilsyth, with its high population of trade professionals and vicinity to industrial zones, seemed like the perfect spot. After an agonizing ten months of searching and analysis, Tony Soccio and his partner Michael O’Donohue opened up on the busy main road.

The new 1000 square metre store on Canterbury road is the culmination of detailed research, forward thinking, and good timing. “Tony’s store is not just a new store, it is a pilot store for us to move forward,” says Greg. The body, look, feel and colour scheme have all been carried on from the original ‘Total Tools Industrial’ model but it was also ‘tweaked’ considerably to give it a friendlier look. For example, high-level roofing gives the store more of a warehouse look, and improved merchandising, visible signage and clearly sectioned departments gives it a greater retail feel.

The departments include mechanics tools, automotive, storage, plumbing, welding, lifting, power tools, ladders, and safety. On top of this, special orders are one of the largest ‘departments’. “We have up to 10,000 skus per store,” says Greg. “We offer a lot of specialty tools and in turn, our differentiation from our competitors is that up to ten percent of our store sales can be attributed to customer special orders,” he says.

Obviously they also stock the TTI private brand that covers hand tools, mechanics tools, air tools, machinery, and other specialty items. “TTI is a well received line that is comparable to the best in the market while remaining competitively priced,” says Greg. Naturally, being a specialist also means offering the best advice possible. “[In a competitive sense] our service quality is as good as you’ll get,” says Greg. “A tradesman will come in and request a technical type craft, and if he is not confident that Tony’s staff or our other staff can accommodate his need, the customer will lose confidence in the store and will more than likely walk out the door,” he says. Indeed, employee quality is always a top priority, and most are either former tradies or come from an industrial field.

Total Tools Kilsyth has been a runaway success so far, and Greg, Tony and Michael couldn’t be happier. By the time this issue is printed, the store would have had its doors open for just over two months, yet it exceeded all expectations, with initial sales forecasts already close to double. The Kilsyth store is part of a grand five year plan that will see new stores opening across the country. For now it’s early days but if the initial short term success of Kilsyth is anything to go by then the future looks very promising. Hardware stores who want to convert and specialise in professional tool retailing (See page 28 in Hardware Journal January 08) are encouraged to get in touch.

“Total Tools enjoy very strong support form suppliers and national brands and we’re a network with very strong growth opportunities. Obviously the market is the professional trade tool sector, so we compete between large industrial supply and hardware. There’s really no-one else that does it as well as we do it!” says Greg. 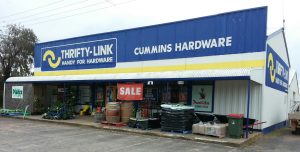