Retailing is never an easy occupation and right now things are tougher than they’ve been in a decade. US correspondent Bob Vereen reports

Like most consumers across the world, the US public is being subjected to mounting economic pressures, including high energy costs, growing unemployment, and inflated costs, particularly for food. The natural consequence is a reduction in purchasing, which means consumer are making fewer shopping trips and – in many cases – changing where they purchase from.

The unfortunate reality for many retailers in this tough economic climate is that they must now cope with unusual conditions. And yet surprisingly, the pressure appears to be actually helping some smaller independents at the expense of their larger chain store competitors. Two major factors seem to be behind a shift to smaller stores. One is the high cost of gasoline, which encourages local shopping to reduce mileage, while the other is a shift towards saving money by repairing things that go bad rather than replacing them. Since independents are often close by – and traditionally offer better services – many are recording sales gains while the bigger players like Home Depot and Lowes are recording small sales declines.

According to a recent Wall Street Journal article, consumers are ‘trading down’ most of their purchases in favor of discounters like Wal*Mart, Family Dollar, Dollar General, dollar stores and deep-discounters like Aldi food stores. Department stores like Target are suffering because they rely on discretionary apparel and fashion purchases, while according to a firm that tracks store traffic, store traffic in the two big home improvement chains is down ten percent from a year ago, as consumers put off big projects and big purchases.

One Kentucky hardware store owner tells the story of a new customer who previously did family shopping at a larger city 17 miles away, but began shopping locally because of fuel costs. Now that family is a regular customer and this same dealer says overall traffic in his store is up. A retailer in Maine supports his view. “I am encouraged because over the last month and a half, store sales are up double digits. I feel we are doing better than most because of the service and people that we offer. Customers absolutely love it when you are able to spend time with them and help them with their projects and emergencies.” Another retailer in upper Michigan reports being up six percent for the year, while a multi-store operator in New Hampshire across the nation reports an eight percent sales gain, partly attributable to a new location near a Super Wal*Mart, which has increased his traffic and store visibility.

The importance of good service amongst independents is confirmed by a survey by the J. D. Powers research organization. Their Home Improvement Retail Store Study found that Ace Hardware stores had the highest customer satisfaction rating, achieving 791 on a 1,000 point scale. True Value dealers rated 774, ahead of Sears and Home Depot, although Lowes and Menards trailed Ace.

Smart independent retailers are encouraging this shift by emphasising their broad product selections and promoting the expertise of their people. An effective technique used by some retailers is to run ‘Hard-to-find Sale’ advertisements that feature very unusual items that can solve repair and maintenance problems around the home. Others picture and profile their key employees to emphasise their experience. Home Depot’s management have recognised the growing importance of qualified employees. They have slowed store expansion and are said to be allocating millions of dollars towards training existing staff and hiring more employees, preferably retired or qualified tradesmen and women. This is a radical departure from the company’s policies under previous CEO Bob Nardelli, who fired a considerable amount of experienced help in an effort to run the stores with more part-time help. It didn’t work, and the company’s reputation suffered.

One independent retailer – more confident about his business than he has been for years – offered this insightful perspective. Consumers will need better advice for all those fix-up tasks, which means qualified and talented employees (or owners) will be a retailer’s most valuable asset.

There is an adult generation out there that’s come of age knowing nothing but ‘good times.’ Housing values went up. Job prospects went up. The financial services sector exploded. It seemed like lots of people had lots of money and prospects of getting more. In the course of this economic run-up, we accelerated consumption trends. Everything was disposable. We became a truly ‘remove and replace’ consumption society and there was no need to repair much of anything. Many previously durable products sank to the level of the counter top toaster: run the product for its three-score and 10 weeks, then toss it and purchase another. The common skills necessary to repair things drifted out of the ordinary citizen’s skill set and the sense of wonder the normal citizen expresses when opening the car hood is now the same when they open the front door to their home: no user-serviceable parts inside. The ordinary citizen had the money so they hired plumbers, carpenters, landscapers, house cleaners, painters, and all the rest to free up time to enjoy life. Big Box stores were designed to sell massive amounts of merchandise at a perceived low cost to people who perceived that they had lots of money to do lots of things. They did a great job. A hardware store was not intended to sell massive amounts of merchandise at low prices. In fact, people in general began to forget what a hardware store was really about: a place where you go to buy stuff to fix things. Nothing-to-fix means you don’t have to visit a place like a hardware store. We heard the story of a young woman who didn’t know where to get a toilet plunger because she didn’t know what a hardware store was really for.

We are entering a period where people will have to cut back. They can no longer automatically pay for minor to major home improvements. They are considering expenditures and they will have to learn how to practice those old values of use it up, patch it up and make it do. 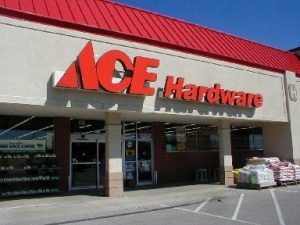