What made the Home Depot what it is today? US correspondent Bob Vereen provides a fascinating recent history of the world’s second largest retailer.

It’s ‘back to basics’ for Home Depot, the world’s largest DIY chain and one of the world’s largest retailers with more than $70 billion in annual sales. For the first time in history the company’s sales and profits declined, and the new management team is taking aggressive remedial action.

Founded more than 30 years ago, the chain brought unprecedented change to retailing across the world. Home Dept were the first to successfully introduce the concept of warehouse retailing on a mass scale, and the model subsequently spread into countless other US retail channels and then got adopted (and in many cases improved) around the world. Even the word ‘Depot’ was put to use by other retailers, like Office Depot and Furniture Depot.

The Home Depot had become the dominant DIY chain at an astonishing pace. It offered genuinely low prices, exceptionally good customer service by the standards of mass retailing, and boasted a loyal cadre of enthusiastic employees. However, as the two primary founders – Bernie Marcus and Arthur Blank – neared retirement age, they made one mistake.

Marcus and Blank recognised that the business had grown so dramatically that it had actually outgrown their operational and logistical systems. Depot’s legendary growth was slowing, their image had slipped, profitability was starting to flatten. Change was needed, and this required putting someone in charge with demonstrated expertise in managing a large, complex business.

It was at around this time that General Electric chose Jeff Immelt to succeed the legendary Jack Welch as chairman and CEO. Bob Nardelli – often called ‘Little Jack’ because of his aspirations to succeed his mentor – had missed out on the prestigious post following a highly publicized succession battle, and within ten minutes of the news of Immelt’s appointment going public Nardelli had been offered the job. Nardelli had an exceptional record at General Electric and when he took over Home Depot he immediately began to transform the company by implementing systems and methods proved effective at General Electric.

One of the first changes concerned the way decisions were made at store level. Historically, one of the aspects of Home Depot management that had allowed the company to grow so effectively was their reliance on local store managers and regional executives to make decisions based on their evaluation of local competition, needs and customer requirements. They enjoyed a surprising degree of responsibility and independent decision-making freedom, despite being mass retailers, but this wasn’t the way General Electric did things.

Nardelli quickly began centralizing decision-making and controls in Atlanta, Depot’s headquarters city. Amongst many other things he consolidated nine regional purchasing offices into one centralized buying operation in Atlanta headquarters. Another change, and possibly one of his most successful efforts, was an overhaul of Depot’s technology, improving computer systems that had been overwhelmed by the firm’s tremendous growth. He also added appliances, a successful move in light of Sears’ decline. As a result, Depot is now the industry’s third biggest appliance retailer, lagging behind Sears and Lowes.

Believing industry saturation was nearing, Nardelli also began expanding into the wholesale supply business, spending $8 billion to buy no less than 30 companies. To his credit he nearly doubled sales and the firm’s stock price rose for a while.

Nardelli’s worst decision still haunts the company today. He pared payroll expenses by removing many experienced fulltime employees on the sales floor, replacing them with part-timers. While this undoubtedly lowered in-store payroll costs, it caused terrible damage to customer service, store housekeeping, and employee morale. They learnt the hard way that it is much easier to destroy customer service than it is to rebuild customer confidence.

Depot also began to seriously increase retail margins. When they were founded, gross margins were in the mid to high 20s, a figure that allowed them to undersell most of the DIY chain competition which at the time operated in the 30 plus percent range. Home centre chains like Rickel, Channel, Hechinger, Lindsley Lumber, Ernst and many more were consistently undersold, and enthusiastic Depot employees, many of them enjoying extra benefits as Depot stockholders, frequently provided top customer service. And yet, with virtually all pioneering DIY chains vanishing in the face of Depot’s price and service competition, margins increased under Nardelli. The most recent fiscal year showed that margins hovered above 32 percent, meaning the price advantage had been narrowed, if not eliminated.

Meanwhile, Lowes came into the picture. They were once a small town combination hardware store/lumberyard/appliance chain with some superb IT capabilities, and they had been rejuvenated through enlarged stores. They were a cleaner and more attractive warehouse retailer and they were moving into the suburbs and the metro areas to compete directly with Home Depot.

When Nardelli began centralizing and controlling Depot operations from the home office, nearly half of the longtime executive staff packed up and left. Most of them owned substantial blocks of stock, so they could certainly afford to retire, but Nardelli’s new management style meant much of the entrepreneurial joy of the business had gone. Rather than cope with new dictates, new systems and less operational freedom, they simply departed in droves.

John W. Herbert was one such executive. Marcus and Blank had personally recruited him to run Depot’s Expo Design chain on the west coast after he retired as head of Germany’s Knauber chain. Nardelli wanted him back in Atlanta while Herbert wanted to stay with his stores on the west coast. Nardelli insisted so Herbert returned to Germany, where he now heads BHB and EDRA, the German and pan-European home center associations.

The road to recovery

With customer service slipping, stock price in decline, and profitability going off, Nardelli was finally forced to quit, though he did so with a golden parachute purported by some to be worth a staggering $200 million plus. Frank Blake, another former General Electric executive recruited by Nardelli, became the new CEO in January 2007, and it is under his direction that the company is now getting ‘back to basics’.

One of his first actions was to concentrate on rebuilding the parent firm by selling off the other businesses bought or established by Nardelli. He quickly hired more experienced full time salespeople – former plumbers, electricians, carpenters etc. – the kind of people that Marcus and Blank had originally relied on to provide customer service, and he also launched employee training sessions and re-instituted merit bonuses and other incentives. One of Blake’s most recent moves was to sharply lower more than 1,000 prices, a stern acknowledgement that Depot is no longer the price leader that it used to be.

One of Blake’s biggest problems was the substantial number of shopworn stores. These were outlets that had generated tens of millions in sales, sometimes for decades, that had simply worn out. Stores are now being cleaned, stock levels are improving, and advertising has been reduced slightly but also revamped to once again emphasize price leadership.

New store developments are being reduced in order to fund remodeling of stores. It’s a considerable task, considering there are now 2,000 plus stores worldwide. Depot also closed some stores (15) for the first time ever.

Depot was originally built largely on a factory-to-store shipment concept in an effort to partially lower acquisition costs. As much as 80 percent of products went direct from factory to store, but with stores carrying 30,000 or more SKUs, and with sales no longer growing at double-digit rates, and with stockturns in need of improvements, Blake is working to establish Depot’s own distribution centres to feed stores in smaller quantities to reduce in-store stock levels without hurting sales. All this, while improving stockturns. His goal is to reduce factory-to-store shipments to about 25 percent and each of the 20 distribution centres is expected to serve approximately 100 stores. This concept is similar to the long term strategy used by Walmart and Lowes.

The main reason behind this move is the fact that some Depot stores now generate under $20 million in sales. This is markedly different to many units that previously generated $40 million or more, necessitating a completely different inventory strategy. For every tenth of an improvement in stockturns, Depot will free about $150 million in working capital.

Blake also restored decision making freedom to local area and store managers, allowing them to once more tailor stock according to their needs and their own area. While Depot’s new computer systems centralize purchasing, the systems have been adapted to allow Depot merchandisers to analyze demographic information and local customer preferences so stores can tailor stock selections better. This matches Lowes’ systems more closely. Depot also recreated regional merchandising, with teams in ten scattered cities, who travel throughout their respective regions. The teams help Depot’s centralized buyers make regional decisions.

Blake’s actions will obviously take time to be effective but they are geared to restore Depot’s customer service, in-stock position and pricing effectiveness against strong competitors like Lowes. The trying US retail environment doesn’t help either. Blake regularly visits stores, often walking the floor unannounced to see firsthand how employees are acting and serving customers.

On a side not, nothing says more about the way Depot had changed from its beginnings than a recent statement made by founder Bernie Marcus. In the last three and a half years of Nardelli’s management, he had simply quit visiting stores to see how things were going. 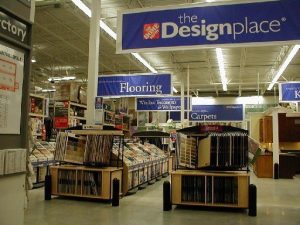