The Australian Competition & Consumer Commission (ACCC) has given authorisation for the Australian Brick & Blocklaying Training Foundation (ABBTF) to continue their programs to address the skill shortage in bricklaying.

The approved levy of $2 per thousand bricks and 10 cents per square metre on concrete blocks is fully matched by the brick and block manufacturing members of the ABBTF. Funds raised are used for a national program designed to alleviate shortages of skilled bricklayers in the construction industry.

The ACCC approval follows a public consultative process across the building and construction industry to assess the benefits brought about by the program over the past three years of the previous authorisation. The ACCC received a number of positive expressions of support for the ABBTF program. The ACCC concluded that the program provided a public benefit by way of increasing the supply of skilled bricklayers and reducing the delays in construction times.

Geoff Noble, ABBTF’s general manager, said the endorsement of the Foundation’s program confirmed that the national strategy to promote and recruit more bricklaying apprentices and to lift the profile of bricklaying added valuable skills to the industry.

“One of our most successful activities is a subsidy of $6,000 for employers to encourage them to take on apprentices. This is topped up by a further $4,000 from the Federal Government.

“We also have a promotional program which includes Step Out programs in schools, giving 40 hours hands-on experience in bricklaying for students at Year 10 level who are considering their career options. More than 10,000 students have completed the program over the past four years. “We have an ABBTF stand at Career Expos across the country, promoting a bricklaying career, and we work closely with TAFE bricklaying schools, as well as Registered Training Organisations. We also support pre-apprenticeship training and bricklaying competitors at Worldskills, a national competition for apprentices across Australia.

“Our development managers in the field work closely with TAFE bricklaying trainers, Registered Training Organisations (RTOs), apprentices and employers to facilitate opportunities for bricklaying apprentices. This includes visits to building sites to talk directly to bricklaying contractors. This is working extremely well. There are also many bricklayers working on sites who have never done any formal training in bricklaying. We are assisting them to have their skills assessed and complete their training to gain a qualification in bricklaying,” said Geoff Noble. In addition to the work of the managers in the field the ABBTF communicates regularly with stakeholders through regular newsletters as well as the organisation’s website. These communications highlight the work of TAFE and RTO’s in training apprentices, presentation of awards as well as bricklaying contractors who take on apprentices.

“We are raising awareness of bricklaying as a career and the opportunities it provides for a career in the construction industry. There are many success stories where bricklaying apprentices have gone on to start their own bricklaying businesses, become builders and project managers to captains of industry,”.

For more information on the ABBTF’s activities visit www.becomeabricklayer.com.au or phone 1300 66 44 96. 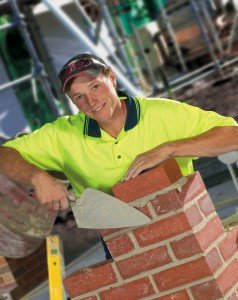