Held at the Shanghai New International Expo Centre in Pudong from 16 to 18 September, the event attracted 2016 companies from 19 countries exhibiting over 100,000 sqm of floor space with over 33,000 domestic and international professional visitors.

It was reassuring to witness that despite the global downturn with some economies on the mend, the outcome of this year’s event left no uncertainty that CIHS still remains Asia’s largest hardware and diy show with a steadfast future.

This could be attributed to the Chinese government’s initiative to boost domestic consumption by investing billions of dollars into the country’s infrastructure and real estate, which saw unprecedented opportunities for overseas suppliers to gain foothold in the still burgeoning Chinese market.

Michael Dryer, vp of Koelnmesse Asia Pacific, points out that in lieu of the downturn, the Chinese government kicked off a series of domestic investment and infrastructure projects to compensate for the temporary declining export business.

Michael said: “As the hardware industry is one of the main beneficiaries of this program, it is more important than ever to make the most of this opportunity to grow the business.”

About the Australian exhibitors

This year saw the launch of the inaugural Aussie Pavilion at the International Hall, organised by Fairlab Pty Ltd.

Philipp Lischke, md of Fairlab declared the inaugural Australian Pavilion a great success as an optimal launching pad for Aussie exporters to the Asia Pacific region and encourages Australians to jump on board for 2010.

“Our exhibitors reported back great interest from buyers within Asia, Europe, Australia and the US…“CIHS has opened up a new marketing and sales platform for them.

Melbourne-based exhibitor, Bordo Industrial Tools and fellow recipient of the ‘2009 Innovative Products Awards’, commented that their main focus establish a stronger distributor base in Europe.

Iain Brown, Bordo’s md said their participation at the show exceeded their expectations: “We are definitely appealing to some of the big players… if you have got something that is of interest, the volume (in sales) is very substantial when they end up placing an order.”

Rod Quinn, gm of Western Tool Distributors from WA concurred. Rod said: “We see it as a great opportunity to raise product awareness for the Hyundai Power Product brand.”

Rod achieved his primary objective by connecting with corporate buyers from Australia and New Zealand, which were previously unavailable to him.

“We have spoken to interested parties from Australia and it’s a great way to see large volume buyers, which you normally don’t see. All our compressors are from our OEM, so any sales would relate to dollars coming back to Australia,” Rod said.

Mathias Kuepper, project director said: “It is a challenge to operate in this critical period, but CIHS has lived up to expectations by building a reliable top-quality, international trading platform.”

Jack Han of Toolfull Industries could not agree more: “The biggest surprise was the number of attendees at the show we couldn’t detect any indication of the general economic downturn.”

First time visitors, Craig Le Breton and Kevin Tsang of Queensland-based C-Cut Tools commented that sourcing in China represented good quality products with competitive export pricing. They were able to obtain what they wanted plus a general indication of product trends.

C-Cut Tools is considering exhibiting in 2010. Kevin said: “We would like to launch CCT products into the US/UK market – it’s a must do project.”

As for encouraging more Aussies to participate, Le Breton advises, “It’s well worth the trip… seeing is believing – I say get over there!” 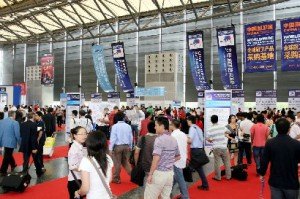