The uninitiated retail paint purchaser would be forgiven for thinking there are only three paint manufacturers in the game: Dulux, Wattyl and Taubmans. Plus the fully imported Nippon Paint, if you happen to go into ‘that other place’. That is the power of brand recognition coming from well-targeted marketing budgets. Nothing could be further from the truth. The independent paint market is alive and kicking with dozens of second and third tier manufacturing operations – though the numbers are way down on the near 500 paint manufacturers of the late 1940s.

Way back in 1946, Australia’s first independent paint company specialising in paint manufacture was started by a man charged with testing water-based camouflage paint for the Australian Army during WWII. This little independent company spurred a world-wide revolution that continues today – and managed to rack up a whole heap of firsts on its own as it tackled the entrenched practices of the majors. The man behind this revolution was Lou Miranda and the company Duralex Paints. Lou was motivated to set up his own company at an extraordinarily young age because his then employer, BJN (BergerJensenNicholson enterprises, manufacturers of Berger and British Paints until Hoescht sold BJN off in the 1980s) wanted to continue its manufacturing of oil-based paints whereas Lou saw the potential for water-based product. Let’s clear up one frequent misunderstanding first. The name Duralex has nothing to do with ripping off Dulux and more to do with ‘durable’. In fact, in those days Dulux was trading as B.A.L.M. which stood for ‘British Amalgamated Lead Manufacturers’.

Duralex produced its first completely washable interior and exterior water-based paint ‘Resin Tone’. Its durability exterior exceeded 14 years and it was the first paint on the market to be completely brush-clog free. By the 1950s Lou saw a need to invent a surface binder to be used on the peeling surfaces characteristic of that dreadful old product, calcimine, so he came up with a water-based product called Kalso Seal. This sealer sold in, literally, hundreds of thousands of gallons and established a market for surface binders.

Meanwhile, the big boys were still playing around with red and white lead and dangerous organic solvents. In 1957, Duralex came up with another world first, a water-based bleed sealer that could cover tar, bitumen and smoke stains without bleed through. Not wanting to rest on his laurels, Lou came up with yet another world first: a vinyl and pure acrylic emulsion and the world’s first gloss acrylic paint. He called this paint ‘AquaNamel’ (sound familiar?).

Mind you, Lou has not been the only paint chemist punching above his weight. Triton Paints was busy manufacturing a cementitious paint (in powder form) called BonCote. This paint had a life expectancy on exterior masonry surfaces in excess of 25 years. Triton no longer makes this product but you can still buy it from another specialty manufacturer, Porters Paints. Porters itself has played an important part in the paint industry in developing a range of textured finishes. Porters showed the majors there was demand for such products spurring them to manufacture competing – and somewhat more user-friendly – textured finishes. Another specialty manufacturer was Ferropro (before its purchase by one of the majors) which specialised in water-miscible anti-rust coatings. A seeming contradiction to mere mortals: but not to a good paint chemist. Colormaker Industries in Brookvale in Sydney’s north will make you similar products if you have enough volume.

Another independent that rates a mention, not so much for developing technology but rather for recognising an advanced product, was White Knight (before its purchase by Barlowworld – now PGP). The then owners of White Knight recognised the value of the world’s first single-part turps-clean up epoxy resin paint they marketed as ‘Rustguard’. If you peeled the labels off the early batches you could see they were simply re-labeling an imported paint manufactured by an American company called Zynolyte. Rustguard is today part of the PGP stable but its entry into the market place spurred Wattyl and Galmet to manufacture chemically similar coatings. Zynolyte itself was eventually taken over in the US by Akzo Nobel – the Dutch company that owns the Dulux label everywhere else on the planet except Australia and New Zealand.

I tend to always carry one independent label as a second-string paint brand because the independent tend to sell at much lower prices than the majors without too much sacrifice of quality simply because they do not have the huge marketing on-costs of the big boys. That means I get more margin whilst still undercutting the majors’ prices. So raise a glass to the independent paint manufacturers. Historically, they have been at the forefront of technological development. They also tend not to compete directly with their own customers through company-owned trade depots. I think of these small manufacturers as being analogous to Don Chip’s Australian Democrats in that they ‘keep the bastards honest’. I just hope they don’t go the same way as the Democrats! 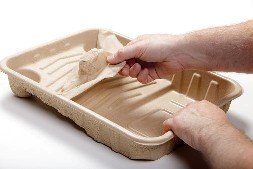