The British Hardware Association hosted the event, attracting 300 delegates from 14 countries – United Kingdom, France, Sweden, Denmark, Netherlands, Germany, United States, Australia, Canada, Switzerland, China, Austria, Nigeria and Italy. Patron for the event, HRH The Princess Royal, opened the Congress with a well-prepared talk on the hardware industry of the UK and the rest of Europe. Mark Berrisford-Smith, a senior economist with HSBC, spoke first, presenting an economic summary of the UK and the rest of the world. Whilst he believed the worst was over, he qualified that by saying that the recovery would take many years and some things would never recover. He noted that Australia had got off lightly compared to most of the developed countries of the world.

Stephen Robertson, director-general of the British Retail Consortium (BRC), spoke next. The BRC represents 80% of the British retail sector and includes Marks & Spencer, Tesco, John Lewis and B&Q as members. He reported that sales in the retail sector in the UK between 1995 and 2007 had increased 70%, whilst the number of enterprises had reduced by 20%. In future, he said, consumers would demand convenience, quality and simplicity. Ethics would also increase in importance and there will be a greater demand for transparency. Robertson believes the internet will influence almost all purchases, either through online research, purchasing, delivery or consumer reviews. An era of frugality will also replace the excesses of the credit boom. As for supply chains, Robertson asked how retailers can reduce supply costs. He also questioned what suppliers have that retailers don’t need.

Peter Cullun, CEO and major shareholder of Towergate, a $5.6 billion Insurance Broking and Underwriting business, stimulated our minds with his pearls of wisdom. For example: “Make sure your distribution gets to the end user”, “Re-invent the model every three years”, “Hire the best people possible”, “Emphasize cost control” and “Be customer-centric”.

Xavier Durieu, secretary-general of Euro Commerce, spoke about the European Union. You can see his notes on www.iha2009.com (follow the links under ‘News’). Ben Phillips was the next speaker. He runs a group of 21 cookware stores operating under the name of Steamer Trading across southern England. A family business since 1985, he puts its continued success down to concentrating on what customers expect, high levels of customer service and good value, which is not the same thing as low prices. Today’s customer, he said, wants to be delighted, entertained and tempted.

The talk by Simon Bicknell and Tim Strong gave an interesting insight into how you can increase sales by up to 30% by using your suppliers’ total inventory. They produce a laminated 750-page book to be used in-store at a kiosk. This allows the customer to view many more products than the store could possibly stock, which in turn creates special customer orders. They’ve taken this concept on-line, allowing for immediate ordering.

Our next speaker was Margaret Gooch of Calor Gas. Gooch stated that Calor give all their employees a reward statement, detailing not only the wage that has been paid, but extras such as bonus payments, health insurance, overtime, loadings, sick pay, etc. Employee turnover had been reduced as a result of this communication. Calor has its own Sales Academy. Its core values are performance, transparency, progression and learning to win. The benefit of this is that all people starting with the company know they are going to be trained into their jobs. Another Calor initiative is their Talkback program. It encourages employees to provide the company with ideas. Employees are rewarded when their ideas are utilised and the outcomes are published so that all employees can read about them, prompting further ideas from staff members. The company, in turn, has been rewarded by simplifying its business, improving customer satisfaction, increasing income and reducing costs.

Gooch’s final words of wisdom were: “Hire for Attitude and Train for Skill”. Billed as a motivation speaker, Philip Hesketh started his presentation by stating he was not going to motivate anyone. People motivate themselves, he said. Hesketh believes that people are only interested in themselves, their problems and their desires. Therefore, if you want their full attention, it is wise to remember that. “People don’t care what you think unless they think that you care,” he added.

Furthermore, he said that you don’t persuade people. Instead, you influence them. He also convinced us all that the result in life was not important, but the journey to get there was. And that your reputation as a storekeeper is the experience of your customer, minus the expectation. You can learn more by getting hold of his book Life’s a Game So Fix the Odds: How to be More Persuasive and Influential in Your Personal and Business Life. Last on the bill of speakers was Bill Lee, managing director of the North American Hardware Retail Association. The NRHA is hosting the 2011 IHA Congress (www.iha2011.com) in Washington DC next year, from July 13-15. It will be followed immediately by the HRHA Conference, from July 16-17.

Socially, the conference was superb. On Friday evening, we visited the Tower of London to view the Crown Jewels, then followed up with dinner dance while cruising down the River Thames. On Saturday, we went to Hampton Court – Henry VIII’s old stamping ground, and we attended a black tie Gala Banquet at Whitehall Palace (where Charles I lost his head) on Sunday night. Fortunately, we kept our heads, though they were admittedly a little lighter by the end of the night. The final part of the Congress was a visit to GLEE Garden Trade Expo in Birmingham. That can be a tale for another time.

I am pleased to report that I was elected to the Managing Committee of the IHA, replacing Mark Fahey, who stood down last year.

Loi and I were proud to represent Australia and thoroughly enjoyed the experience at the Centenary Congress. I look forward to seeing as many as possible at the 2011 Congress 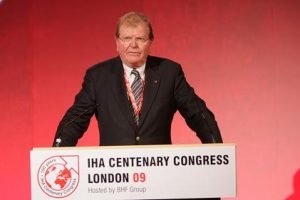