AHJ: Insulation is on the nose a bit at the moment because of dodgy installers, inferior insulation and insufficient government regulation…

DD: I think what the current program has done is put the microscope on something that’s been happening in existing home markets for a long time, and that is that there have been house fires. This is not due – in almost all cases – to the insulation itself, but to poor installation.

DD: That’s the other thing. They talk about dodgy insulation in stories, but if you look at the figure in Kevin Rudd’s report, they’re talking about one in 10,000 fires in homes are associated in some way with insulation.

AHJ: Have the number of house fires increased since the Home Insulation Program was introduced on July 1, 2009?

AHJ: So it’s all relative.

DD: The requirements that they put into the Energy Efficiency Homes Program for installers were far stricter than those required in new buildings. Prior to the program, there were no standards or training required for people putting insulation in for existing homes because it was a relatively low investment, it didn’t require a permit or council approval, and people were doing it themselves as well. All of the fires were related to people not following the established Australian installation standards. In relation to insulation that can catch fire, it would have to come into contact with a very hot down light or something like that. If it’s installed properly, the proper guard required around the insulation should protect that from happening. Fires occurred because installers were throwing the insulation over the top of something that would start a fire.

AHJ: And which is which?

DD: Glasswool and rockwool are non-combustible. Other forms of insulation would not, as far as I know, pass AS1530.1, which is the test for whether or not the product is considered to be a combustible building material.

AHJ: If you talk to Bradford or Fletcher Insulation, they’ll tell you their product is better than some of the imported ones. Is that correct?

DD: If insulation is installed according to the standards, none of it should catch fire. There are provisions within the standards that prevent that.

AHJ: I presume that either you know what you’re doing when you install insulation and you know what those standards are, or you get a professional installer to do it for you?

DD: Under the recent [Home Insulation] Program, they were training installers to understand what the standards were. But it would appear that there were a small number of people who decided not to follow them.

DD: Probably. When we’ve gone back and had a look at their (the three installers who were electrocuted) installation, they haven’t complied with the mandatory standards that were required under the program. What a consumer needs to look for [regarding the performance of various insulation options] is that the product – regardless of what it’s made of – fits AS/NZS5459.1. Products going into new buildings must pass that standard, which sets out protocols for both thermal performance claims and extensive labelling requirements. And it also stated that if a product has an R-value, it must be correctly tested by a recognised independent laboratory.

DD: Not many laboratories in Australia are registered to test to AS/NZS4859.1. CSR have a NATA registered laboratory that is able to test to this standard and my understanding is AWTA (Australian Wool Testing Laboratory) is or may soon be registered. The main laboratory that does testing is BRANZ in New Zealand. But you also have certifying bodies – like SAI Global, Global-Mark or BSI Group – that are accredited to be able to say that the product meets AS/NZS5459. Those accreditation values check your process; in other words, that your production quality doesn’t vary.

AHJ: We’re talking about R-values. The higher the R-value, the more resistant it is to heat, right?

AHJ: Are these are the ones catching fire?

DD: No. When you lay the foil products horizontally, there can be a concern about electrocution with all the wires that run around the ceiling and the joints. When you start laying them horizontally in your ceiling or under the floor – because that’s where a lot of the electrics are as well – you have a higher chance of coming in contact with some form of loose wire. Being made of aluminium, the risk is it could transfer the current straight across the roof.

AHJ: So you think batts are better?

AHJ: Do you mean glasswool or rockwool batts or any type of batt?

DD: Any batts that have been properly tested and have the right independent test results, meet the Australian standards, and are installed professionally so there are no gaps.

AHJ: What sort of batts are there?

DD: The most common are glasswool (also known as fibreglass). Since the Homes Insulation Program was instigated, seventy-four per cent of homes have been insulated with glasswool batts. Worldwide, glasswool is the most common form of ceiling insulation, by a long shot. That’s because it won’t rot, it doesn’t catch fire and it generally maintains its shape.

AHJ: What about cellulose? Do we have that?

DD: Yes. Cellulose is a loose-fill product and has its own standards to meet. If barriers are created around halogen lights or hot flues going through the ceiling and they’ve produced the product to the right standards, that’s also used.

AHJ: Do we have plastic foam?

DD: That’s polyester batts or fibre, like you’ll get in a swimming pool cushion.

AHJ: Do we also have rigid board?

DD: Yes, but it’s not used that often. The advantage of batts is that they’re very springy. You can cut them slightly oversize so that they actually spring into place. You can fit them to make them meet and they hold their own weight – they’re quite light – before you put the plaster on in a new home. With cellulose, you spray it in, usually over the joints to get the right thermal value. But when you’ve got a rigid board and the timbers aren’t straight, it’s a lot more work to cut those boards and get them into place. It can be done – they’re good insulation – but the cost of them and the fitting of them are just not cost-competitive against normal home insulation.

AHJ: Regardless of cost and assuming they’re installed well, which is the most effective form of insulation?

DD: It depends on what products are tested to and for. You should be looking at the test results to ensure that the product you’ve got actually meets the R-values. It’s all in the performance.

DD: Products with values up to R6 are available now. I think the more valid question for those purchasing insulation is to see what R-value is recommended for their particular climate zone. If they had to meet a building code, they should make sure the product has been properly tested and that they have a performance warranty for the long term of the building. And you’d be looking for warranties for installation.

AHJ: How can you be sure that it is all that? That it adheres to those tests? Is there some sort of stamp on them? DD: If the product is supplied in bags, it should have all required information and standards listed on the label. That’s part of meeting the standards. If the product is blown in – in other words, directly out of the back of a large truck – the contractor should give you a certificate stating that the product has been independently tested and meets these standards, and that the contractor guarantees the product and the installation. As a builder or home owner, I’d be looking for a manufacturer’s lifetime guarantee of the product and a contractor’s lifetime guarantee of the installation and performance of the product. In the latter stages of the Federal government’s Home Insulation Program, the insulation industry was working with government to electronically publish an ‘Approved Products List’ detailing products that had been independently reviewed and met the requirements of AS/NZS4859.1 An initial list was published but has been withdrawn for more extensive review. Hopefully the list will be refined and republished. This would be a valuable reference for installers, other building professionals and consumers. 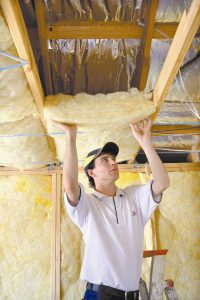