In the April 2010 issue of Australian Hardware Journal, we looked at how sales agents form an integral part of the hardware industry. This time, we cover the same topic, but from a supplier’s perspective.

Sales agents play a prominent role in the hardware industry, and it’s not until you’ve been in the game for a while that you realise just how big a part that is. Bunnings, for example, is the biggest player in the business, and it’s largely because of its size that it insists on smaller suppliers using agents to represent them. Without agents, the suppliers would be underservicing the most profitable retailer in the land – a scenario that is unacceptable to everyone involved.

Agents may be state-based, they may be nationwide or they may even service markets either side of the Tasman Sea. Personnel may number just a few or they could tally into the hundreds. Some specialise in hardware while others crossover into groceries, whitegoods or automotive, the common denominator being that they’re all involved in retail industries. With so much to think about, it pays to research the various agencies before settling on one that best suits your business.

“About six years ago, I went through a process of meeting three or four agency groups,” says Carlos Colmenar, Retail Manager at Scott Health & Safety in Sydney. “I chose AusRep because of its reputation I suppose, as well as its ability to serve us nationally. Because of the scale of our distribution and the number of people it’s got in different places, we couldn’t possibly achieve the same result on our own.”

“You need to get along with them and know that they can merchandise your products well,” adds John Burge, Director at Champor Investments, a small Melbourne business importing decorative wind chimes and garden sticks from Bali. “Ours can be a pretty labour-intensive product. Our agent, Sales Maximizer, has been terrific though.” Burge began selling wind chimes and garden sticks through nurseries and wholesalers to the plant supply business about 10 years ago. They then managed to get into Bunnings at a time when gift shops operated within their warehouses. Today, Burge says Champor Investments products are found in “80 to 100 Bunnings stores along the eastern seaboard”. “Once we got into other states, we were relying on the person who ran the gift shop (in Bunnings). It made sense for us to get an agent. With the size of Bunnings, you need someone out there representing you. We needed to have someone calling, ordering stock and keeping it neat and tidy. Bunnings tends to rely on the merchandising people to display things properly. They expect everything to be straightened up, dusted down and organised regularly. “Sales Maximizer has built up a good team of people. They’ve got people up in Cairns and Rockhampton which – short of me jumping on a plane and going up there myself – helps me out a lot.

“It (employing an agent) changed the way we do business, increasing turnover and the like. It’s worked very well.” The feedback coming from Carlos and John, as well as several other suppliers who use agents to help them in their merchandising, regarding the usefulness of an agent is all positive. Each of them listed different reasons for choosing to employ agents on their behalf, but a common theme rang throughout.

“It’s a cost-effective means of servicing hardware stores,” says Ken Rapkins, National Channel Manager – Hardware for cleaning, pest control and air care manufacturer, SC Johnson, owners of iconic brands Baygon, Raid and Mr Muscle and a longstanding client of sales agency, Lincoln Brokerage. “They’re always in the stores, for other brands as well as ours. If we weren’t using them, we’d have to employ our own reps, who can’t physically divide their time between each store as well as agents can.”

A back-of-an-envelope calculation confirms Rapkins’ thoughts. A company sales representative in Australia would be on a minimum salary of $50,000 per annum. Employers are also liable for compulsory superannuation contributions and Workcare levies for their staff. Then there’s the added costs – fuel, registration, insurance, repairs, depreciation, tolls, parking – of running motor vehicles that those reps can get around in. Should they be required to fly interstate to service clients, there are flights and accommodation expenses to take care of. There are also the costs of supervising or training your staff, and allowing for downtime due to sick leave or annual leave. Compare all that to sales agents, who charge clients only for the time they’ve worked, and the decision becomes straightforward. But that’s even before you’ve considered the added benefits.

“Our agent always represents our product well,” says Michael Malone, whose company, Aussie Trolleys, manufactures “around 1,200 lines of trolley” from its Dandenong, Melbourne factory. Of those 1,200, two – a folding trunk trolley and a mini pallet – are sold nationally through Bunnings, using more than a little help from Paul Balsillie and his team at Sales Maximizer.

“Bunnings has sold our folding trunk trolleys for 16 years, during which time plenty of competitors have come and gone, yet it (Bunnings) still wants to put our products seven shelves up. Paul manages to get it down low to where it’s accessible. He gets out into the store for us. “He also comes up with new ideas. For example, Paul’s got a client who needed warehousing and distribution in Australia. We’re always looking for new opportunities, so he got us together. Now, we’re doing it for them.” Tapping new markets on behalf of their clients sounds like bread and butter work for agents. Because they’ve got so many people scattered around the country and each one of them has a physical presence in every store they service, they gain access to the right people. “That’s an integral part of what they do,” explains Champor Investments’ John Burge. “They know who to talk to. They know the team leaders and complex managers. In the past, I had to do that myself.”

“They’re able to create more demand for our products through the different distribution centres,” adds Scott’s Carlos Colmenar. So, it’s clear that each agent operates differently, though with a common goal – of servicing their clients well. How they achieve that is up to the agent. “I don’t think there is any magic formula for being a successful sales agent,” says Lincoln Brokerage’s Gordon Sinclair. “You’ve really just got to be committed to sales and communicate in an open and honest way with both clients and retailers. After all, we should all share a common goal of getting product in the hands of consumers, and if done correctly, all should benefit.” 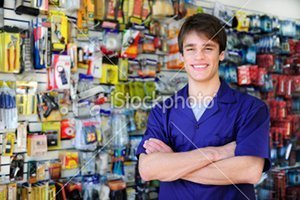