Mitre 10’s ‘Evolution’
In late July, senior Mitre 10 personnel – some of them former Metcash executives – invited major suppliers to the Marriott Hotel on the Gold Coast so they could update them on their strategic direction over the coming months and years. The morning’s seminar began with an impassioned speech about the importance of independence by Mark Bouris, the Wizard Home Loans founder and host of The Apprentice television show. Carl Salem (General Manager – Merchandise & Marketing), Julie Smith (Marketing Services Manager), David Edwards (General Manager – National Sales, Trade & Support) and Mark Laidlaw (CEO) then all took turns to talk about what they intended to do in their respective departments. Below are excerpts from two of them…

Our culture.The culture we want to bring to Mitre 10 is what you’re witnessing today. Our culture is about meeting face to face with our suppliers and our membership on an informal basis so we can get to know you properly. We want to get to know you, we want to mix with you and we want to have fun with you because we feel that builds a better working relationship.

Independence.It’s been the theme right through. Mark Bouris talked about it, Carl (Salem) and I have lived it. We are not scared of the big gorillas. We love it, in fact.

It’s great being the underdogs.?

It wasn’t always that way. When [Metcash CEO Andrew] Reitzer came to this country, there were 27 independent [grocery] brands and they were very fragmented and they were all off doing their own thing. The independents were weak. In the last 10 years, that’s all come together and there are two strong independent brands surviving today – IGA and Foodworks. We’re now a very, very strong independent group. We need to replicate that same model into hardware. And we will, and we can. It comes down to two primary cultural things that we’ve already touched on:

Family village tribe.One Mitre 10 store out there cannot fight the chains. If you grew up together in a village, you feel a lot stronger because you’ve shared ideas with each other and you start to get Best Practice in place. That’s when you can take the big guys on.

The 80-20 rule. The 80-20 rule of independence is that IGA and Metcash provide their retailers with an 80% footprint – the right range, the right price, the right marketing programs – and they leave the other 20% to the owners to do their own thing in their local neighbourhood. And that’s where you’ll resonate. That’s where you’ll win. A good independent will always beat a good chain store. The best thing I’ve come across [since I started] is the brand, Mitre 10. It’s truly a strong brand. But we’ve got eight different formats – Mitre 10, Mitre 10 Handy, Mitre 10 Solutions, True Value, etc. It’s like playing a game of footy and our team’s all turning up in different jumpers. It’s unacceptable because that is our face. The first thing we have to fix up, quickly, is our brand format so we’re all playing on the one team.

We’ve got to change the game and these are the five to six things that we need to focus on in the next six to 12 months:

Protect and grow the network.In the last six weeks that we’ve been out there, it’s been about protecting the existing network. There are three stores that Bunnings have approached, and they’ve offered a lot of money to them. We’ve had the money to save them.

Supply relationships.In the future, you [suppliers] are going to need a strong independent group, and we’re it.

Supply chain efficiency. The warehouses are okay, but they’re not automated. They’re not at the level that we need them to be so we’ll be spending a fair bit of money getting the warehouse automation in place.

Competitive range.We don’t have that because we’ve had different issues. We haven’t bought full ranges for our warehouses because we didn’t have the money. Now we do, so we’ll get the full range in. We have to come out with a compelling offer for our membership to make sure they support us. It’s very fragmented at the moment.

The next phase is to truly grow and get to that 15-20% market share (currently close to 6%). I’m here for a minimum of three years and in the next two to three years, I hope to get a big jump in sales out of this business, with a 3% EBIT (against 12% at Bunnings). We don’t want to keep any more than that. We’d rather pass that onto our membership.

Independents test the dominance of chains, and in the Australian marketplace there is only one true independent hardware group… and that’s Mitre 10. No one else can claim that. We are going to enjoy wonderful relationships [with our suppliers], but when the price is wrong, we’ll be telling you and expecting you to fix it. You need to be very, very clear that it is you – the supplier base – that will format the program for independent competitiveness. As we go forward, we may want a piece of the earth that you’re enjoying, but I assure you that it will be transferred into competitive activity to ensure that the independent channels of hardware in this country grow market share and give you options.

These are the things that we will do:

Retail standards.We have to make sure that great retailers with great businesses become the peers of the group and encourage the balance to invest in their retail and consumer offers.

Consistency.When buyers make the decision to support suppliers, they can be guaranteed that support for two years. Real opportunities don’t mean that when we change our people, we change our minds. We’ll have a business process that sits above the people.

Speed to market.This is a difficult market for speed and we need to be creative. If we put in a system and commit that 39 SKUs will go into our warehouse – the entire range – we won’t be deleting 13 in six month’s time because they don’t sell.

Of all the jobs that we’ve got to do, Mitre 10’s management will start with these things:

One of the greatest things that Mitre 10 did in the past 10 years was to get its business up to a level of success that courted a suitor, Metcash. Now a Top 100 ASX company has its money on the line at Mitre 10 and we’re ready to go. The reality is that we need to start to evolve our operation. Today, with Woolworths-Lowe’s coming in and the dominance of the chains, it’s not about survival. It’s about ‘survival of the fittest’, and we will be the fittest independent channel in Australia.

We are the distribution experts of the hardware trade with four normal warehouse operations in this country distributing nearly 16,000 SKUs, but it’s too costly. We’re looking at doing programs now through the MITRECOM system that will require some IT infrastructure partnering from suppliers. We will centralise orders through centralised distribution. If you have a centralised point of receival for your hardware orders and you knew that you were only sending those orders to four distribution centres for cross-docking around Australia, you will make more money. In doing so, we will all have a better life in the supply chain, which unfortunately is our largest cost in doing business. For future reference, we’re absolutely focussed on having as many meetings as possible with suppliers in the Hallam office. I hate the telephone. Get in the office, sit face to face [with me] and talk the real deal.

We will conduct a number of study tours. Some of them may be overseas ventures to go and have a look at a hardware show or trade show, whether it is in Cologne or India or China, and continue trying to build our relationships by building New World opportunities.

We will continue Supplier Conferences. And will be seeking feedback on this [supplier conference] on what we can improve and what we should remove. We’re intent on having another Update Conference early next year to let you know how we’re proceeding on the business plans that you agree on in August. We will also have a Mitre 10 Expo & Conference for Retail and Trade on the Gold Coast in February 2011. Mitre 10 is a great brand. That’s not enough. I’ve been saying to our members that we’ve got to be a great group. I give you the same message – we’ve got to be a great group. 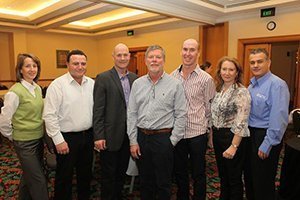