For over ninety years, Sutton Tools has been synonymous with the design and manufacture of high-specification cutting tools, most of which are still made in its factory workshops in Victoria.
As Jim Sutton walks around Sutton Tools’ main premises in Thomastown, an industrial suburb in Melbourne’s north, it’s clear he’s lost little enthusiasm for the business he ran for years in tandem with his older brother Bill. Now retired, he still manages to pop into work one or two days a week, fulfilling his current role as a Director of the company, but also because he’s reluctant to step back completely.

“I still enjoy it,” confesses Jim, a statement that needs little trouble verifying. As he talks about the business of engineering high quality cutting tools for the industrial and hardware markets, it is evident that Jim is proud of his family’s place in Australian manufacturing. His face lights up when he speaks about the 450-odd staff Sutton employs in its four factories in Australia and New Zealand, and how 10 of them have given more than 50 years of service to Sutton Tools.

“I think we’ve given away a couple of hundred gold watches,” he adds. But Jim’s joy at the family company’s role in providing livelihoods for thousands of people over the 93 years since its founding is tempered by the demise of Australian manufacturing. He constantly laments the lack of willpower and direction taken by some of his peers who sold out or shifted their operations offshore. Even after our interview has concluded, he’s still keen to explain what’s inside each building or how glad he was that Sutton stuck it out when the fundamentals of closing a factory sometimes pointed against it.

“Once you close a factory down in Australia, you can never open it again,” he says. “When we bought P&N (Patience & Nicholson), we were surprised to find how bad [their two factories, in the Victorian towns of Maryborough and Hamilton] were and it was either close them down or re-equip. Bill and I, being mad engineers, said we’ll re-equip. And it was the right decision. Both of them are going very well.

“All you need is a bit of passion and a bit of push. If you look at the top nations that are doing well economically, they have thriving manufacturing industries, i.e. Germany and Japan. I look at America and they’re just throwing their hands up and walking away. There are only three small drill manufacturers left; the rest have gone off to Asia. I was in Sheffield (England) last year, where Bill and I virtually learnt the trade as young lads, and the last major cutting tool manufacturer in England shut down. There’s zero left.” For 40 years, from the time when Jim’s grandfather, William, began manufacturing cutting tools from a factory site in Westgarth, Melbourne, in 1917, Sutton Tools prospered through an average annual growth rate of around 10%. Then things started to change. Sales flattened and growth was negligible. At the time, Sutton was one of four Australian drill bit makers in what was becoming an increasingly competitive environment.

“Sutton Tools started small and managed to grow because we had the determination to survive and move forward when our competitors were dropping out of the market,” says Jim. “We were always considered the backyard boys. Our competitors used to call us the ‘technocrats’. We were really good technically with our engineering, but pathetic at marketing. But we had a very solid base – the best equipment, the most efficient manufacturing and the best quality product. Once we got on top of the marketing side of it, nothing could stop us.”

Sutton Tools also embarked on an acquisition trail that would eventually see it own each of those four competitors and restore its 10% growth trend line. However, the last eight years have flattened off again. “Industrial growth in Australia is zero or even negative, and the only growth has been DIY and export. We could see very clearly that you had to export to grow, or you had to make new acquisitions, and we’ve virtually run out of acquisitions.

“In order to export, you’ve got to be innovative, efficient and have a product that’s better than the imports. I’ve always said to everyone here, ‘If you can’t export it, you shouldn’t be making it.’ I think that still applies.” That realisation several decades back – that Australian manufacturers needed to make products that were superior to those offered by Asian competitors who would always have the upper hand in a price war – was a revelation for Jim and Bill Sutton. “We were being attacked at the lower end of the market by cheap products from Asia and our industrial arm was being attacked by the high quality tools from Japan and Germany (and some from America). We were being squeezed at both ends of the market into the middle market and we had nowhere to go.

“Back in the 60s, we consciously made an effort to go upmarket through better designs and materials. That was the right move because now 90% of our exports are at the high end of the market; our biggest customers are Germany (where Sutton sold its five millionth drill bit in 2006), Switzerland and Italy. “As far as the hardware market is concerned, tradespeople won’t use cheap products. They want good quality product to go with their expensive power tools so they choose our drill bits, which are three times the cost of Asian products. The sophisticated DIY man then follows the same track. They might start with low cost then realise those products have limitations and eventually pay more for the better quality product. I think that’s why we’ve succeeded.” Jim concedes that being a family company – the fourth generation of Suttons hold management positions at the company today – has helped. Sutton isn’t expected to pay dividends to shareholders every year as some of its stock exchange-listed competitors do, with profits instead ploughed back into the business.

“The most important contribution towards our success has been huge reinvestment into research and development and manufacturing processes. At the moment, we reinvest six per cent of sales into capital expenditure and R&D. My father started that. When Bill and I started out here (in the 1950s), he encouraged us go out and buy new equipment. That, without doubt, has been the reason for our success – reinvestment.

“Our philosophy is we treat research and development seriously. We are on an ongoing vigil to stay abreast of technology advancement and our objective is to manufacture tools that achieve higher speeds and longer life.” Sutton’s management has made a habit of attending the big engineering shows in Germany each year, where they are able to see new designs by competitors. The shows also serve as networking opportunities in the company’s push to enter virgin markets, and they are routinely approached by foreign agents enquiring about getting access to Sutton products. Being a small company in comparison to its competitors, Sutton can offer fresh tool ranges quickly and on demand, “so we’ve always got something new, or relatively new, to offer these dealers,” says Jim.

Whenever that happens, the flow-on benefits the industry as a whole. Sutton technology is developed and patented primarily for industrial use. The business has been instrumental in increasing the automotive and aerospace manufacturing sectors in Australia by supplying high quality cutting tools specifically to those industries. It also founded Surface Technologies to apply coatings that extend the life and quality of cutting tools, increasing the quality-cutting tool base in Australia by providing services that were once sourced from overseas. This technical know-how in turn trickles down to the do-it-yourself market and it is also used to gain new business under licensing arrangements.

“Recently, we got a joint venture into India making tungsten carbide industrial tools. They’re paying for the intellectual property. We feed them the designs, we do the testing and we advise them on the coatings. “We originally obtained a $6 million grant from the Australian government to investigate cutting tools for difficult materials, and the R&D as a result of that grant has rubbed off on this venture in India. That knowledge then benefits the development of new products for the DIY market.” Sadly, Jim believes the market for cutting tools in Australia has stagnated in recent years, and he even goes as far as saying that the demand for industrial tools is in decline. Fortunately though, the hardware sector is growing at a rate of around three per cent per annum. Nevertheless, Sutton is looking to increase sales through exports, with a particular thrust being made into Europe.

As well as marketing and warehousing personnel in Singapore and Hong Kong, there are Sutton guys on the ground in England and Holland, all of whom are trying to expand the market for 17,000 product lines Sutton manufactures in its three Victorian factories and one New Zealand site. An amazing 75% of those products carry the ‘Australian Made, Australian Grown’ logo. “The AMAG logo is a key point of difference for us,” says Jim. “We are the only Australian production manufacturer of cutting tools and I have no doubt consumers take more notice and place greater consideration towards to this when making a purchase.”

You’d have to agree, and much of Sutton Tools’ success has been a result of diligent management by successive generations of family members who have stuck to the family mantra: ‘Manufactured in Australia, exported to the world.’
MD 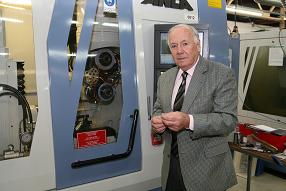