The 2010 AHJ Retailer of the Year, offered in conjunction with Hills Industries, is Hume & Iser Home Timber and Hardware Bendigo.
Cast around and you won’t find too many hardware stores that date back to the 19th century. It takes a lot of dedication, a healthy dose of business nous and willingness from successive generations to continue the job their forebears started for one to survive so long. That, if nothing else, makes Hume & Iser a worthy recipient of this award. “Hume & Iser support great brands in its retail landscape and ensures that its customer-focused staff is well trained to provide patrons comprehensive and experienced assistance when shopping in-store,” said Bill Harris, National Sales Manager, Field Sales at Hills Industries. “Hills Industries is proud to be involved in sponsoring the award to acknowledge the invaluable role that retailers play in supplying premium products and advice to consumers.” Hume & Iser evolved from a Bendigo sawmill during the 1850s gold rush. Some three decades later, in 1880, William Humme purchased the City Steam Saw Mills. When Humme died in 1889, his brother-in-law Henry Iser assumed ownership, giving the business its Humme & Iser name (Humme was anglicised to Hume during the First World War).

During subsequent decades, Hume & Iser expanded its category ranges into bricks, tiles, plaster and garden, despite the fact that it is still located on its original Charleston Place site. Today, the site includes a 5,000m2 store, an external timber yard that’s almost as big and a 1,000m2 garden centre.

Hume & Iser Managing Director, Stephen Iser, said it was “wonderful” to win the award and was looking forward to passing the good news onto his staff members in recognition of their contribution. Stephen is the fourth generation of Isers, with a fifth generation (cousin) on the Board of Directors. Business at Hume & Iser is split evenly between trade and retail, though Stephen considers timber to be one of the business’ core areas, describing it and the trade building supplies division as his “bread and butter”. The timber division continues the sawmilling tradition started nearly 150 years ago by cutting timber to size, and Hume & Iser today ranks as one of Boral’s largest regional outlets to supply and fit plasterboard.

The award caps off a great year for Hume & Iser. In March this year, it was named ‘Victorian Trade Retailer of the Year’ at the Danks Trade Show and Conference held in Adelaide. Danks National Retail Operations Manager, Peter Richards, was thrilled that they managed to add to their trophy collection. “Danks is absolutely delighted that it’s one of its high profile Home Timber & Hardware Group members has won the prestigious AHJ Retailer of the Year Award for 2010,” he said. “It’s a fantastic honour for Stephen Iser and his team at Hume & Iser, who continuously provide the highest level of customer care in an unbelievable store environment.” Hume & Iser Home Timber and Hardware Bendigo was profiled in the May issue of Australian Hardware Journal. 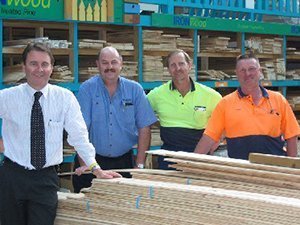