Leading trade and industrial tool retailer, Total Tools, held its annual Conference & Supplier Showcase at the Hyatt Regency Coolum on Queensland’s Sunshine Coast in early December. While the region might not have lived up to its name for most of the conference’s five days, temperatures were still warm enough for people to swim in one of the resort’s nine pools or at the beach, where pounding surf battered the sandy coastline just a short bicycle ride to the east.

The theme for the event was ‘Stronger Together’, an appropriate moniker given each of Total Tools’ 25 stores (23 existing and two new stores) was represented at the conference, along with head office personnel and 35 suppliers. All up, 175 people were in attendance. The event got underway on the Monday with an afternoon conference and a Welcome Dinner for members. The conferencing continued on the Tuesday before members were able to enjoy quality one-on-one time with key sponsors Milwaukee, Bosch, Hitachi, IRWIN Tools, Makita and Stanley Black & Decker during a rotating dinner. The highlight of the night for members was the chance to take a helicopter joy ride over the coast and hinterland courtesy of platinum sponsor, Milwaukee.

Guest speakers Tom Potter (founder of Eagle Boys Pizza) and Kevin Sheedy (AFL great and coach of the Greater Western Sydney Bears, the AFL’s 18th team from 2012) then inspired guests with tales of their career successes and failures on the Wednesday morning. At midday, just as the rain began belting down, 79 golfers of varying ability hopped in a bus and headed north to play 18 holes on the championship course at Noosa Springs Golf Resort & Spa, just three kilometres south of ritzy Hastings Parade.

With birdies galore, the odd kangaroo or swan obstructing play and a few food thieves in black feathered capes ready and willing to whisk away unsecured chocolate bars and chip packets, the 20 teams hacked out scores that made a mockery of the Par 72 course rating.

That night’s Gala Dinner was held in the Mt Coolum Ballroom. The entertainment came courtesy of all-male dance troupe, Raw Metal, with comedian MC and trailblazing fashionista Scott ‘The Doctor’ Williams peppering proceedings with quick-witted one-liners. The Doctor’s side-splitting repertoire at the end of the night caused many of the men in the audience to wince at the accuracy of his observations about their behaviour around their gender opposites. Total Tools Chairman, Rod Harding, and Director, Phil Timbs, began formal proceedings by honouring the seven active founding members – there were originally eight – Ron McNamara (Moorabbin and, more recently, Pakenham), Geoff Patnaude (Albury), Ian Chambers (Braeside and, from December 2010, Carrum Downs), Wayne Brown (Granville), Gerry Smith (Ferntree Gully), John Hawkes (Preston) and Joe Stella (Tullamarine and, latterly, Hoppers Crossing).

Special mention was made of Geoff Patnaude’s contribution, vision and drive in spearheading the fledgling franchise’s expansion from eight stores in 1989 to the 23 stores (and growing) currently trading. New stores will be opening in Ballarat and metropolitan Melbourne in early 2011, with others awaiting council approval in their areas. “This group came together as a consequence of survival,” said Geoff. “We now operate under the culture, ‘all in one in, one in all in’, and I believe that in the next five to 10 years, we will become a household name.” With double-digit growth during the global financial crisis and further increases during 2010, it’s a claim that’s well and truly achievable.

Total Tools CEO, Graeme Longmuir, then announced that a new award for the supplier who represented excellence in retailing would be named after Geoff. Of the nominees from the four states Total Tools currently operates in, the winner’s $5,000 cheque for the Geoff Patnaude Representative of the Year Award went to Victorian, Glenn Murraylee, from IRWIN Tools. Other nominees were Gary Malloy from Sutton Tools (NSW), Andrew Cronin from Makita (Qld) and Bill Doohan from Hitachi (SA). The award was presented by Total Tools Merchandise Manager, Peter Sandercock. Peter then announced the nominees and winners, which were decided by way of a silent vote by members. Josco took out the Under $500,000 award ahead of Spear & Jackson and Paramount, with IRWIN Tools getting the gong for the Over $500,000 award in front of Sutton Tools and Stanley Black & Decker.

After a short morning conference in the Yaroomba Room, franchisees headed over to The Pavilion for the Supplier Showcase. The gathering together of so many leading suppliers in one room was an opportunity for members to find out what they currently have on offer and any new marketing initiatives, as well as getting the jump on new products about to be released. Members were also able to use the time to voice any concerns they might have or to solicit feedback from those they trust.

The conference wound up with a members-only day on the Friday, when a Leadership Program was followed by a Farewell Dinner. By the end of the week, members were buoyed by a renewed level of enthusiasm towards building their businesses, as well as anticipation at the prospect of travelling to Queenstown, New Zealand for the 2011 Conference & Supplier Showcase. 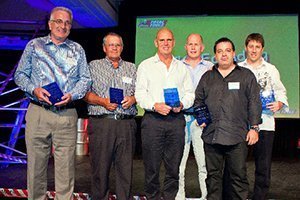