More than 200 people from Victoria’s hardware industry attended the annual HAV Awards Night at Powerhouse Function Centre on November 25. The night proved to be a huge success, with retailers, suppliers and key industry personnel from across the state acknowledged for their achievements during 2010.

Despite a wet and windy night that had become routine weather during the recent Melbourne spring, the evening was still warm enough for guests to mill on the balcony for canapés and pre-dinner drinks while overlooking Albert Park. Proceedings then got underway at around 7pm, when HAV President Ian Cornwell welcomed everyone and thanked sponsors for their support. Industry stalwart, Ron Fletcher, took over as MC, outlining the list of awards for the night and giving a brief synopsis detailing each sponsor, with energetic cover band Louie & The Party Boys playing several sets throughout the night.

A clearly chuffed Cathy Ryan took out the night’s first award as the Representative of the Year. Cathy works tirelessly at Gainsborough Hardware, which was duly recognised when Wayne Horton from award sponsor, DuluxGroup, was on hand to present a magnificent crystal trophy to her. Dulux was quickly added to the list of award winners when it was voted the best Supplier of the Year, courtesy of Danks. Colin Joell, a fixture at industry functions in his role as Dulux’s State Sales Manager – Retail, popped up to receive the award from Danks’ Andrew Toomey. The next award for the Young Retailer of the Year is one that is close to Australian Hardware Journal’s heart and as such, it felt duty-bound to once again sponsor the award. General Manager, Ray Quek, believes there is a “need to support good, young employees who have plenty of drive and passion while they develop their skills”. Twenty-six-year-old Arlene Clark, who works at Kilmore Timber & Hardware with her father Rob, took home the top prize, with Australian Hardware Journal Sales & Marketing Manager, Ann Goble, on hand to present her trophy. The Employee of the Year, sponsored by Pronto Software, went to Russell Barrett from Knights Building Supplies in Kyabram. Ian Cornwell then re-engaged the audience when he returned to the stage to present the inaugural HAV President’s Award to Sutton Tools.

“The award recognises family structures as being important in the industry from a supplier’s perspective. We thought it was a good opportunity to acknowledge those from a non-corporate background and the resources they apply to servicing their customers,” explained Ian. The Store of the Year Awards were eagerly anticipated by all nominees in attendance. Event partner, Otter, was handed the honour of presenting each award, with Otter CEO George Varelas on stage to say a few words and hand the trophies over to each of the worthy winners. Winners were decided by a panel of three independent judges. They were: 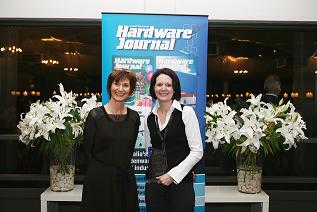