Over two hundred retailers, suppliers and committee members celebrated the HASA 2010 Gala Awards Night at the Adelaide Convention Centre on November 13. The annual event recognises excellence and achievement in the industry for both retailers and suppliers while simultaneously raising money for Make-a-Wish Australia.

With long-time Adelaide radio personality, Tony Pilkington, using his dulcet tones to maximum effect behind the microphone in his capacity as MC for the night, together with an entertaining performance by Sydney comedy cabaret outfit, Drags Aloud, guests were guaranteed a performance unlike anything they’d ever seen before.

HASA President Rod Evins introduced the night before inviting Jay Bedford, from major sponsor DuluxGroup, to say a few words. Peter Stewart, from gold sponsor Bunnings, then walked onto the stage to present the award for the Sales Person of the Year, which went to Fiona Rosalia from Bob’s Home Hardware & Timber in Whyalla Norrie.

Certificate IV graduates were presented with their SA TAFE course diplomas before DuluxGroup’s Jay Bedford re-emerged to present the Store of the Year Awards. Keith Mitre 10 was announced as the winner of the Under 1,000m2 Category A, with Home Timber & Hardware Port Lincoln taking out Category B (1,000-2,500m2) and Better Homes Supplies Mitre 10 Home & Trade Port Augusta winning Category C (Over 2,500m2).

The three category winners were then in the running for the South Australian Store of the Year Award, which Home Timber & Hardware Port Lincoln won. With all of the awards distributed, Rod Evins handed over a cheque for $7,155.50 to Make-a-Wish Australia’s Frank Jackowiak. The money was raised during the night from a silent auction and a table elimination draw. Once the formalities were over, cover band Chunky Custard belted out old favourites that included Greased Lightning ,The Time Warp and Nutbush City Limits, allowing guests to unwind at the end of an evolving year in the hardware industry. 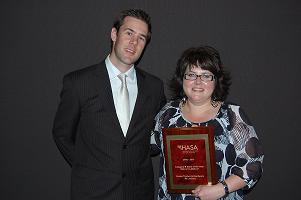