Members of the National Kitchen & Bath Association (NKBA) participated in a survey to reveal design trends in the North American marketplace for 2011, many of which could crossover into the Australian market.
KITCHENS
Dark Finishes

Dark natural finishes overtook medium natural, glazed and white painted finishes to become the most specified type of finish towards the end of 2010. While medium natural fell from being used by 53% to 48% of designers, glazed from 53% to 42% and white painted from 49% to 47%, dark natural finishes rose from 42 to 51%. Light natural and coloured painted finishes remained fairly common, as each rose slightly from the previous year – 24% to 25% for light natural and 24% to 29% for coloured paints. Distressed finishes dropped significantly from a year ago, when they were used by 16% of designers, to just 5%.

The Shaker style began a rise in popularity in 2009 and gained momentum in 2010. By the end of last year, Shaker supplanted Contemporary as the second most popular style used by NKBA member designers. While Traditional remains the most popular style, having been used by 76% of designers surveyed over that last three months of 2010, that’s a slight drop from the previous year. Meanwhile, the percentage of respondents who designed contemporary kitchens fell to 48%, while Shaker rose to 55%. Cottage was the only other style to garner at least 20% of the market, registering at 21%.

A Place for Wine

While the incorporation of wine refrigerators seems to be on the decline, unchilled wine storage is growing in popularity. While only 39% of surveyed designers incorporated wine storage areas into their kitchens at the end of 2009, just over half (51%) did so as 2010 came to a close. While other types of cabinetry options remain more common, most are on the decline, including tall pantries (89% to 84%), lazy Susans (90% to 78%) and pull-out racks (81% to 71%). Appliance garages also seem to be falling out of favour, as their use declined from 36% at the end of 2009 to 29% a year later.

The French door refrigerator has strengthened its position as the type specified most often by NKBA member designers. While freezer-top refrigerators were only specified by 8% of designers as 2010 drew to a close – down from 10% a year earlier – freezer-bottom models fell very slightly from 60% to 59% and side-by-side units actually rose slightly from 46% to 49%. Meanwhile, French door refrigerators jumped from 67% to 78%. Among smaller units, refrigerator or freezer drawers remained flat at 31%, while undercounter wine refrigerators fell sharply from 50% to 36%, an interesting change given the increasing use of unchilled wine storage.

Incandescent lighting continues its journey to obsolescence. While 50% of NKBA member designers incorporated incandescent bulbs into their designs at the end of 2009, only 35% have done so a year later. Instead, designers are clearly opting for more energy-efficient lighting options. While the use of halogen lighting is down from 46% to 40% over the past year, LED (light-emitting diode) lighting has increased from 47% to 54%. Designers aren’t turning to CFLs (compact fluorescent lights) as a solution though, most likely due to the poor quality of light they produce; their use by designers remained flat at 35%.

Induction cooktops haven’t overtaken gas and electric models, but they’re closing the gap. As we entered 2010, gas cooktops had been recently specified by 76% of NKBA designers, compared to 38% for electric and 26% for induction. However, while the incorporation of gas cooktops has fallen to 70%, electric cooktops has risen slightly to 41%, while induction cooktops are up to 34%. Meanwhile, single wall ovens are down from 46% to 42%, although double wall ovens are up from 68% to 74%. In addition, warming drawers are down from 49% to 42% and ranges are down sharply from 81% to 68%.

Trashy Designs
A greater emphasis is being made to address waste considerations in the kitchen. Some 89% of kitchens designed by NKBA members in the final quarter of 2010 include rubbish or recycling pull-outs. In addition, garbage disposals were incorporated by 86% of designers, up from 75% the previous year. Garbage compactors have also become more common. Entering 2010, they were recently used in designs by 11% of designers, but a year later that figure had climbed to 18%. These changes may be due to an increase in sustainability awareness, but they certainly indicate an increase in concern toward waste generated in the kitchen.

Under mount sinks continue to dominate newly remodelled bathrooms, with 97% of NKBA bathroom designers having specified them over the last three months of 2010, up from 95% a year earlier. However, vessel sinks have become the clear second choice among designers, as 51% of NKBA member designers have specified them in the final quarter of 2010 – up from 39% a year ago. Integrated sink tops were also up from 34% to 38%, pedestal sinks were up from 21% to 29% and drop-in sinks were up from 23% to 27%. This shows that bathroom designers have been specifying more lavoratory sinks across the board.

Quartz continues to take away market share from granite in the market for bathroom vanity tops. A year ago, 85% of NKBA bathroom designers incorporated granite into a recent design compared to just 48% for quartz, but now that gap has narrowed to 83% for granite and 54% for quartz. Unlike in the kitchen, solid surfaces haven’t gained much popularity in the bathroom, increasing only from 23% to 25% over the past year. Meanwhile, solid marble has declined from 46% to 37%, while cultured marble and onyx have increased from 12% to 19%. No other material has even 10% of the market.

No, we’re not referring to eco-friendly spaces – we literally mean green bathrooms. A year ago, green colour palettes were used by only 14% of NKBA designers, but at the end of 2010 that figure had risen to 24%. Still, whites and off-whites, beiges and browns are the three most commonly used colour tones in bathrooms. However, while white and off-white palettes are up slightly from 57% to 60%, beiges are down sharply from 66% to 57%, while browns have dropped from 48% to 38%. Other common colour tones include blues at 22%, greys at 21%, and bronzes and terracottas at 17%. 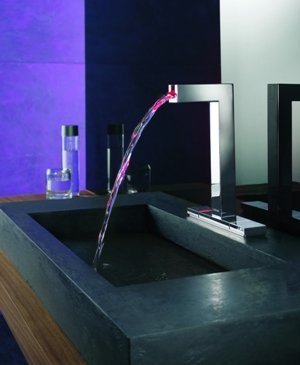