In a world where independent hardware retailers are increasingly exiting the market, buying group HBT’s member numbers are growing. Group Manager, Tim Starkey, explains. As always, Tim Starkey is upbeat when we meet. And so he should be. In a time when corporate retailers and buying groups in hardware are fighting tooth and nail for market share, member numbers for Hardware & Building Traders (HBT) are on the increase. Growing member numbers have been a constant trend for HBT ever since six shareholders formed the proprietary limited company in 1997. Back then, HBT’s limited buying power benefitted just 13 stores. A year later, that number reached 24, then 33. By the time HBT held its annual member’s conference in Perth last April, member numbers had topped 300. And in mid March this year, it was up again – to 325 – following a trend of roughly three members gained for every member lost.

“As always, [member numbers are] a moveable feast for HBT,” says Tim. “Ninety per cent of the ones we lose are because of the usual baby boomer issues – no succession for the business, the real estate’s worth too much and, in some instances, competitive pressures.” Plenty of Mum and Dad businesses are included in HBT’s ever-expanding membership tally, which also has a strong regional flavour. Tim lists a roll call of tool and fastener specialists, timber yards, locksmiths, truss plants, joinery shops, rural services retailers, plumbing and paint franchises, as well as traditional corner hardware stores, in HBT’s membership. But there are some sizeable businesses in there as well, run by progressive owners and managers who help generate dollar sales of millions of dollars annually. The reasons for them joining up with HBT are many though all, its fair to say, were attracted to the simplicity of its business model. For starters, the fees are minimal, with new members paying a joining fee of $2,500 and nothing thereafter. Suppliers – at last count, HBT had more than 260 local and international suppliers listed in its Deal Book – pay an administrative fee to HBT’s head office of 1% of sales orders, as well as member rebates, which vary between 1-15% depending on the product and volume ordered. Each member store is responsible for its own relationship with suppliers. As the HBT website states, members open their own accounts with suppliers and are responsible for their own ordering, payment, account maintenance and other matters. HBT does not guarantee payment by members. Nor does it place orders or put together collated buys. At member meetings, member support for deals is reviewed and comments are actioned and fed back to suppliers.

Most of the big hardware buying groups have experienced declining member numbers in recent years, partly explaining the rise in HBT’s stocks. Bunnings’ growth has taken a toll on all of them, and smaller hardware stores are slowly falling away for reasons outlined earlier. Despite this, the team at HBT still manage to hunt down stores that are unaffiliated with any buying group. “You think there are none left, but we keep finding them,” says Tim. “We’ve recently identified a niche market in power tool specialists. And we continue to see strong interest from stores [currently] in the two major independent chains. “There are different reasons for that. I think there’s some uncertainty in the Metcash camp because those store owners face the probability that they will cease to be part owners of the group business. That’s a change. Some of those guys have been members of a cooperative for 30-odd years, and to suddenly become a franchisee and not an owner is a significant shift in mentality. Whenever you make a major change, some people won’t be happy.

“We also continue to see a number of stores that are badged in a way that probably doesn’t enhance the profitability of their business. They’ve had enough of the catalogues or branding costs or whatever it is that don’t necessarily improve their business. What surprises those guys is when they have a look at us, they find also that a significant portion of their buying is actually more profitable through our budget, no frills group. “Stores are also starting to question whether having Woolies as their major supplier makes sense, given that in the past Woolies appears not to have wanted to wholesale to independent retailers.” While the mood at HBT may sound positive, those at the helm are under no illusions that significant challenges lay ahead, particularly with the entry of the Woolworth-Lowe’s consortium later this year. Some analysts predict that as many as 1,500 stores and perhaps one of the buying groups may be casualties of the impending shuffle, and that HBT members and the group are the most likely of those. “There’s no question that a proportion of our smaller members, particularly, will struggle where they are in markets that are competitive with the two big boxes,” agrees Tim. “I think it’s commonly accepted that a share of the market which independent retailers have in our industry will continue to shrink proportionately over the next number of years. Clearly, there’s going to be more competitive pressure when Woolies eventually gets up and going. “I think a revitalised Mitre 10 is going to bring more competitive pressure too. They’ve come from a background that (a) has some money behind it, which Mitre 10 hasn’t had for years, and (b) they have serious logistics and supply chain capabilities that will advance their position and enable them to maybe catch up to Danks, and I think they openly acknowledge that they’re behind Danks.

“While it might not look like it when you go through our membership list, one of the great strengths we have is that we are predominantly a trade group. About two-thirds of the business we transact [with our suppliers] is trade related. We think that gives us some level of protection against some of those competitive forces. Trade is about service and the guys who do trade well – like the majority of the guys in Natbuild, for instance – have got a stronger position. “We are the smallest group player, clearly, and likely to remain that way for I don’t know how long. What we offer is far less sophisticated than the two franchised groups obviously. We don’t offer any management systems or marketing systems; we just offer better buying. Because we have such a simple offer we don’t cost very much, and that’s why our members can be very competitive with their buying.” While simplicity is the order of the day for HBT, it has also been proactive in advancing its cause through the establishment of the H Hardware brand in 2009. The first HBT stores to commit to the H Hardware brand were Cameron’s two hardware outlets in the southern New South Wales coastal towns of Bateman’s Bay and Moruya. Eighteen months later, 11 stores operate under the H Hardware banner, with others in the process of joining or waiting until they’ve got the cash to pay for the brand’s bold livery.

“There were two core objectives of the H brand. The first was to be highly visible at store front, for a brand that had no marketing campaign behind it. Because there is no national marketing budget, there is no campaign unless stores choose to do their own advertising. “Does it achieve that? Based on talking to the owners who’ve done it and have had the brand in place for a while, the answer is, ‘Absolutely, it does.’ If you go to, for instance, Nambour H Hardware in Queensland, you cannot drive or walk in either direction down Price Street without seeing that store. It’s impossible. We think the visibility of that store works fantastically.

“The second objective was to say something about what the store did. The only reason the words Bunnings or Mitre 10 mean anything to consumers is because of the vast marketing dollars expended behind them. I mean, the word ‘Bunnings’ is just a name, so what we did was to create the H Hardware brand. And what it does by its presence is it clearly communicates that this is a real hardware store. You can’t be confused about what the store does.” Nor can you be confused about what HBT offers its members. As its website states, there are only two mutually reinforcing objectives. For members, that’s lower buying prices and higher margins. For suppliers, its sales volumes. And judging by the figures, it’s a winning formula.

HBT’s annual member conference will be held at the Melbourne Convention & Exhibition Centre from May 5-6. 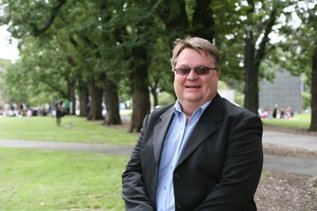