Errol and Zea Mymin mixed their original batch of Timbermate Woodfiller using an old Mixmaster in the family kitchen. Today, Timbermate products are exported to 15 countries around the world.
Every company starts small; even big companies. Take Coca-Cola. When John Pemberton first concocted a hangover cure using cocaine as one of his prime ingredients, little did the 19th-century druggist know that it would become the world’s most popular beverage.

While Timbermate is hardly the household name that Coke is, its origins and business prospects were similarly modest. Soon after Errol and Zea Mymin emigrated from South Africa to Australia in 1987, they bought a share in the now dissolved Mordialloc Timber, where customers regularly asked Errol to recommend a good wood filler. It wasn’t long before he remembered an old formula that he’d come across back in South Africa, where he’d enjoyed a long association with the hardware industry. The formula was for a wood filler that used water as its main ingredient, and though the formula dated back to 1927, Errol and Zea decided to see if they could mix up a batch themselves.

They dragged an old Mixmaster out of their kitchen cupboard and set it up on a bench in their Melbourne home. By the end of the day, their kitchen was smeared with putty but the first batch of Timbermate Woodfiller was ready for testing. After ensuring that it wouldn’t shrink, sink, crack or fall out, and that it produced no waste, the Mymins began selling Timbermate via the timber yard and quickly realised that they were onto a winner.

Today, the company that took its name from the Mymin’s original product manufactures three other timber-related products as well – Earl’s Powder Putty, WAXSTIX and the recently released Earl’s Multifill – from Timbermate’s factory warehouse in Mitcham in Melbourne’s east. “I don’t know the first thing about chemistry,” says Errol, “but I’ve managed to come up with three products of my own from what I’ve learned over the years about different ingredients and different ways of working from a base, then experimenting, testing and spending a bit on R&D, etc. “We also import some products out of America. Earl’s Wood Hardener is about 80% imported and we do the last bit of work here (in Mitcham). By the end of the year, we’ll probably make it under licence. Everything we make comes from our Mitcham premises.”

The list of products in Timbermate’s warehouse now includes concrete, exterior and foam fillers, as well as adhesive removers, paint brushes, graffiti removers, rotten wood solutions, silicon rescue tapes and rubber straps. They are used by cabinet makers, flooring installers and furniture manufacturers, as well as wood turners, builders and hobbyists. In the industrial market, Timbermate products are available from flooring, cabinet making and industrial suppliers, and in retail they can be ordered through the Mitre 10 and Danks warehouses, and paint and specialist stores. The Mymins have also made a point of trying to service independents across the country, no matter how remote they are. They have offices in New South Wales and in Queensland, where it is a 50% owner of Paint and Hardware Distributors, as well as representatives in every state.

“We have to look after the small hardware store. They serve a purpose. They keep others honest. As small as they might sound, they’re a very important convenience,” Errol says. After branching out across Australia, foreign markets beckoned. Errol placed an advertisement in a Chinese magazine, looking for a foreign agent who would be interested in distributing Timbermate products in Asia. An Indian gentleman who had been living and manufacturing in the Philippines noticed the ad and called Errol. “We shook hands and did a deal, and he’s been my mate and agent for years now,” Errol explains. “He goes to places I don’t go. For example, he does shows in Dubai and Abu Dhabi and India and Sri Lanka. Between the two of us, we cover everything.”

Timbermate currently exports to 15 countries, which Errol says Austrade has made a major contribution towards. “[Austrade] was probably the best thing that we ever had in our business. However, I do think that their program should run for 10 years. You need that bit of help at the end.” Timbermate serves the North American markets from an office in Chicago and it has an agent in the UK, where it sells under a different name. It also has distributors in India, Indonesia, Malaysia, New Zealand, Philippines, Singapore, Sri Lanka, Thailand, Taiwan, United Arab Emirates, Vietnam and China.

“We’re probably the only container that goes on a boat back to China,” adds Errol, before explaining. “What a lot of Chinese companies do is convert. They get products sent in from America and they do the finishing for them. We supply the fillers for all of that, then they fill it and finish it and send it back in containers to America.” With such a global reach, it would have been easy for the Mymins to join the flood of companies outsourcing their manufacturing to countries like China in order to keep costs down. But it was never a thought that Errol has seriously entertained. Instead, he has decided to adopt a policy to manufacture or distribute products based on quality rather than price.

“We’ve got a really good name for the quality of what we sell,” says Errol. “We never get comebacks here. If we got half a percent as comebacks, that would be enormous. But as soon as you go overseas, you lose quality control. “It’s very easy to make a mistake. It’s too easy to mix a wrong colour or create problems. And when you haven’t got control over what you’re doing, no matter how good somebody else is it’s still not the same as having your own. I’ve got very good staff who have been with us for a very long time. They know what they’re doing, they’re very efficient in what they do and they’re loyal.

“Our formula’s like Coca-Cola. Everybody can make cola, but no one can make Coke. We’re the same. There are some ingredients in our product that just make it work and if anybody ever found out those ingredients, we’d be out of business.” “I’m so passionate about doing something in Australia. As long as we can do it here, we’ll do it.” MD 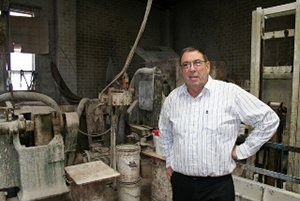