Justin Gainge taps into the latest trends in screws. 1) Shoppers are pre-drilling less

Traditional style wood screws (requiring pre-drill for shank and thread) and self-tapping screws (requiring pre-drill for thread) require more work to install. For that reason, they are being overlooked, with consumers preferring easier self-drilling varieties such as chipboard, hinge/long threads, type 17 and needlepoint screws. As a result, expect to sell fewer traditional wood screws and self tappers. The exceptions are when people need to replace old wood screws in furniture, or where they just can’t break old habits.

Demand for these 14-gauge bugle head screws continues – especially in larger quantities – with more sizes offered for more applications. Perfect for heavier jobs, batten screws are used in multiple, quick construction jobs and are self drilling for fast and easy use in both soft and hardwoods. They finish flush and have an internal hex drive that does not turn out on application. Outdoor applications include decking, rails, pergolas, sheds, retaining walls, planters, fence repair, arbours, post supports, gardening and landscape, and general frame construction. Look out for new lengths, as these continue to become more popular. Traditional bugles consisted of three sizes – 50mm, 75mm and 100mm. As their use became more universal and widespread, new lengths were introduced to cater for these novel situations.

The introduction of in-between sizes, such as 85mm bugles, lend themselves to joining two pieces of 50mm timber where a 75mm screw didn’t give enough purchase into the base material and 100mm screws were too long for the application. An example is garden sleepers used in retaining walls, which are commonly 50mm, and horizontal sleepers that need to be fixed to vertical sleeper posts to form the wall. Longer sizes, such as 125mm and 150mm, have been around for a relatively short time, but are increasingly popular and can often be used where a bolt and nut would traditionally be used. This decreases time on the job as a hole would normally require pre-drilling, with a bolt inserted and access to the other side needed to thread on a nut and washer before the nut could be tightened. In contrast, a bugle screw needs only access to one side, does not necessarily need pre-drilling (depending on the substrate) and can be power driven using a drill. More recently, 175mm and 200mm batten screws have extended the use of bugles in landscaping even more.

During the past five years, decking screws in Climacoat® and grades 302, 304 and 316 solid stainless steel have been preferred over nails. Today’s consumers are more aware of the benefits of screwing, i.e. they don’t ride up over time and, given their superior corrosion resistance, stainless steel screws virtually last forever. Square-drive screws in 8 and 10 gauge stainless steel require pre-drilling and pre-countersinking (304 and 316 stainless steel are soft, and care is required when driving the screw home). That said, once installed you want get a better look and longer lasting fixing result for your expensive outdoor living area.

4) Corrosion resistance is big deal
Today’s consumers are savvier when it comes to corrosion. After all, it doesn’t make sense to spend large dollars on an outdoor timber project such as an entertainment area then forget to consider if the fasteners will go the distance. With any type of repair or construction requiring screws, it’s not worth the risk of using interior coatings (of 3-5 microns of electroplated zinc) when you can use exterior coatings (25 microns of zinc-tin alloy or 50 microns of hot dip galvanising). For a few cents more per screw, the risk of corrosion is reduced. Anyone living within one kilometre of the coastline, or those fixing a deck using treated pine timbers (with the typical expansion and chemical issues) should consider stainless steel screws.

Consumers are voting with their wallets. The shift from interior (zinc-plated or gold-passivated) to exterior coatings (galvanised) has been dramatic. The movement from galvanised finishes to special coatings for treated timbers (Climacoat®, Tufcote®) and to grades 302, 304 and 316 solid stainless steel has been steadily gaining pace over the past five years.

Some merchandising tips for your screw category 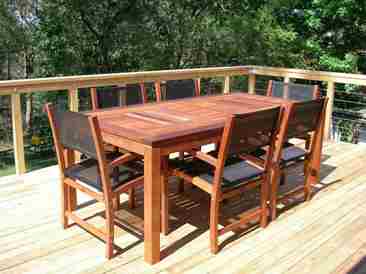