Everything just seems to be getting bigger at HBT. Member numbers are at an all-time high (330) and suppliers who have signed on as HBT supporters have jumped (over 270).

The same trend applied at HBT‘s recent National Conference, held at the Melbourne Convention & Exhibition Centre from May 4-6. Member stores in attendance numbered 180, with 118 suppliers exhibiting their wares and being on hand to answer questions and take orders at Thursday’s trade show. Total visitors increased by 25% compared to those who made the journey to Perth in 2010, with new members wearing green name tags to distinguish them from established members and to encourage older hands to welcome them into the fold.

Recognising that not everyone shares the same interests, and that HBT members often bring their families to their annual conference, tour itineraries were designed for Day 1 that focused on sports, shopping or store tours. Welcome drinks at the Exhibition Centre followed that evening.

Day 2 was when the conference really swung into gear. Basketballer and Dancing with the Stars veteran Andrew Gaze popped in to entertain the crowd with yarns of his playing days as Australia’s Olympic captain and Washington Bullets guard. Makita also recruited Melbourne Storm rugby leaguers Maurice Blair, Sika Manu, Elijah Niko, Todd Lowrie and club legend Robbie Kearns to help out and by day’s end, several suppliers were said to have enjoyed their best trade show ever.

Robbie Kearns returned to the Convention Centre for the Gala Dinner that night to present $82,764.50 worth of cheques to 13 cash prize winners in the Supplier Support Program. With Storm prop Bryan Norrie acting as barrel girl for the night, White’s Hardware & Plasterboard in Taree was drawn as the winner of the $20,691.13 top prize.

By that stage the mood was already festive among the 770 dinner guests, with comedy improviser, Showjo, boosting that atmosphere by staging an entertaining repertoire that encouraged audience participation.

The conference knuckled down to the nitty gritty on the Friday when HBT Group Manager Tim Starkey hosted a business session that painted a positive outlook during uncertain times. Guest speaker Rachael Robertson drew a number of lessons from her 12-month stint as team leader at Antarctica’s Davis Station in 2005 before the award presentations were made after a short refreshment break.

NHS Plasterboard & Timber in Newcastle, New South Wales took home the Golden Brick as HBT’s Store of the Year after just 18 months as a HBT member. This year’s Supplier of the Year was Spear & Jackson, with Macsim Fastenings announced as the Runner-Up, Bremick Fasteners named as the Growth Champion and Special Recognition given to Simmonds Lumber.

Tim Starkey then presented his traditional ‘State of the Nation’ address, concluding that the group’s year-on-year member and revenue growth was something that he was “pretty damn proud of and pleased about” and that the numbers turning out for this year’s conference was a “far cry from when the conference was last held in Melbourne at Rockman’s Regency, when about 40 store members turned up”. Tim noted that growth had been particularly strong in Victoria, that Western Australian members increased the most as a percentage and that his team had recently identified tool specialists to help spur that upwards trend.

Mark Gentle, from store security experts Checkpoint Systems, took the stage to stress the importance of adequate security to prevent pilferage before Tim announced Darwin as the host city for HBT’s 2012 National Conference from June 13-15, continuing a tradition where member states rotate the right to host the event.

Log into the Picture Gallery on our homepage to view more photos from the HBT National Conference 2011. 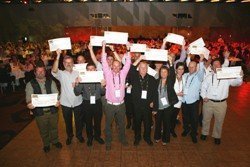