The National Kitchen & Bath Association’s (NKBA) 2011 Kitchen & Bath Industry Show (KBIS) brought together many of the world’s best kitchen and bath dealers, designers, builders, retailers and other professionals directly involved in the design and remodelling of residential kitchens and bathrooms.

The show, held at the Las Vegas Convention Centre from April 26-28, enabled them to interact with nearly 600 exhibitors from around the globe. Organisers said attendees, manufacturers and press members had many occasions to ‘Collaborate. Innovate. Inspire’ – the theme from this year’s event – throughout the show.

This year’s trade show also featured tailored conference programming led by top influencers, including Pat Croce, renowned in the US as a motivational speaker, sports trainer and former president of the Philadelphia 76ers, who presented the keynote address; and Karen Strauss, President of Masco Cabinetry Group, who delivered the State of the Industry address.

One independent reviewer, furniture/cabinet maker Joe Dusel who was attending the show for the first time, was surprised by the lack of appliance manufacturers and European cabinetry. He also noticed lots of Chinese companies at the show, but was unimpressed with their quality. The products he found the most exciting at the show were the hardware, the taps and some of the tiles.

Another blogger, Kymberly (ww.bestplg.com), claimed that America’s largest kitchen and bathroom trade show was a shadow of its former self. “It has died down quite a bit over the last few years, and what used to be in both halls in Vegas now hardly takes up one. In fact, there were hardly any kitchen appliance manufacturers there this year! Many of the large bathroom vendors were missing too,” she wrote.

Kymberly’s review helped solidify debate over whether the show should be held every other year instead of annually, and whether venue cities should be rotated. On the flipside, Kymberly was impressed by Kohler and Brizo’s booths, as well as new products from ROHL.

Going digital is a trend that could become the standard over time, according to several reviewers. Paperblog.com wrote that water conservation and temperature control setting shower systems are leading the way, with manufacturers such as Moen and Kohler prominent. The general consensus is that high-end toilets that play music and remember your ‘bulk waste habits’ might be a tad on the silly side though.

Designer Sheila Off, from CMKBD in Gig Harbor, Washington, says the issue is not so much lack of wall cabinetry, but the sheer size and desired functionality of the space. Off said her clients had ample space for walk-in pantries. Sinks, dish storage and food storage can be incorporated into pantries entirely integrated in appearance into the space, she said, while also serving as a transition from one room to the next.What Won

Sixty entries were judged by a panel of senior print and television media members at the 2011 Best of KBIS Competition. The winners were announced at Centre Stage in the NKBA booth. They were:

The following were examples of products that wowed visitors to KBIS 2011:

These sinks look TRON inspired. A LED illuminated ring is now a sink.

Turn your shower into an idealistic spa by selecting temperature and water deliverance with the touch of a button.

Kohler is bringing back cast iron, but going with 80% recycled and modernising this classic material. Easy to install too, as they are self-trimming.

Exceedingly stylish and efficient. Tap heads lock into precise place each time they are returned. 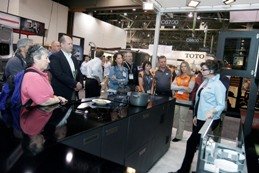