In the 1990s, BRW magazine twice rated Macsim Fastenings as one of Australia’s fastest growing private companies. And because of the forward thinking mindset of its Managing Director, Fraser Mackay-Sim, that growth rate hasn’t slowed.
Staff members at Macsim Fastenings’ head office in Eastern Creek, Sydney nervously joke about Fraser Mackay-Sim going away for a beach holiday to his second home in Port Douglas or to a hardware show in China, Europe or the US. They laugh because they know that he’ll inevitably return home with new ideas that he’ll want implemented. It might be a new decking screw or consumer-friendly packaging. Or even a completely new range of products, like the chemical sealants and adhesives he introduced about four years back.

“I often go away on holidays and come back with ideas. I spend about 16 weeks a year away from my desk and only about 25 hours a week in the office,” explains Fraser, who likes to say that he works on the business – not in it. “I believe that to succeed in business, you have to innovate and constantly update. Renewing your packaging and adding to existing ranges are necessary tasks required to keep up with a world that’s changing every day. You’ve got to change with it. A lot of companies fall by the wayside because they don’t listen to their market, initiate change or innovate.”

Falling by the wayside is something that Macsim went perilously close to achieving at one point, back in the 1980s, so Fraser is wary of it now. By that stage, the company had been trading for three decades, after Fraser’s father, Malcolm, began selling cleaning machines under the company name of Macsim Distributors in 1954. Nine years later, Malcolm was awarded the New South Wales distributorship for Expandet plastic wall plugs, which were replacing fibre plugs that were commonly used to secure screws and fastenings into concrete walls at the time. Over the next decade, Malcolm expanded Macsim Distributors’ hardware product range, though cleaning machine sales were still the company’s main revenue source. Then, in 1972, Fraser joined the company.

“But I wasn’t interested in selling machines, so I started selling the hardware where the customers were more friendly,” he says. Through his interaction with hardware retailers, Fraser was able to learn which products sold and where gaps in the market were. He increased Macsim’s range of anchoring systems and added a few unrelated products he thought he could sell – tap valves, adhesive tapes, tools, vanity units, wire netting, gloves, etc.

“Anything that we could make a dollar out of, really,” he says. In 1978, Fraser determined to change the way his division sourced its products. He looked across the oceans, to where many of the products he was selling originated from. It was then that Fraser decided to import directly from Asian markets.

“I realised you couldn’t make any money out of buying them off other resellers. I had to cut out the middleman.” The decision to import directly took a few years to gather pace. Sales were building and production costs were slashed. But just as momentum was building, the Aussie dollar crashed. It was 1985, and plenty of importers went out of business. Even Macsim struggled, almost to the point of insolvency.

“The business couldn’t really support the two of us – my father and I,” says Fraser. “I said to my Dad, ‘You take the machinery and I’ll just keep the hardware’.” And from that point forward, Fraser became the sole owner of Macsim’s hardware division. He identified fasteners as the most lucrative category in his portfolio and decided to focus on that, adding rivets and screws and bolts to the range and changing the company name to Macsim Fastenings so there could be no confusion over what it did.

“Before 1985, I felt that the company wasn’t really successful at anything. We traded bits and pieces, like a general hardware wholesaler, but nothing specific,” explains Fraser.

“I looked at other businesses in the industry and a lot of them had a unique range of products. I thought that to be successful, you had to have just one product range and be the leader of that range, so I decided to stick with fasteners because our sales were increasing every year while the other products were declining.” As the business began to pick up, Fraser moved the Macsim offices from Newtown to larger premises in Seven Hills and by 1990, it had even outgrown that, requiring a shift to much bigger warehouse in Wetherill Park. A year later, Fraser opened Macsim’s first warehouse outside Sydney, in Melbourne.

“We haven’t stopped opening branches ever since, the last one being Adelaide this year.” Today, Macsim operates warehouses in five states – New South Wales, Victoria, Queensland (2), Western Australia and, just recently, South Australia, as well as in New Zealand. It also has a distributor in Darwin and a franchise in Hong Kong. And in 2005, Macsim relocated again, from Wetherill Park to a 5,000m2 office and warehouse complex in Eastern Creek, where it stores over 7,500 stock items – a number that grows every month as new items are constantly added to the range.

Fraser credits himself with introducing square head screws to the Australian market after helping a friend install a decking area at his house and becoming frustrated at the way the screws that were available at the time chewed out. After lack-lustre sales, he included a square drive drill bit with every packet of screws sold and volumes increased immediately.

Stainless steel decking screws was another product Fraser claims to have introduced into the Australian market after he noticed one building supplies company purchasing large volumes of Macsim 10-gauge screws. “I asked them what they were using them for and they said decking. I said that if they were using them for decking, they should be using stainless steel. So I then brought out a small range of 10-gauge screws in stainless steel, and they took off. Our sales are growing even today. “We now have the largest range of decking screws, with our competitors quick on their toes to follow suit. To stay a step ahead, we are constantly thinking of new ways to package the range or add new sizes.”

In the coming months, Macsim will continue to roll out new products, such as a countersinking drill bit called a Clever Tool (details will be released in the next issue of Australian Hardware Journal). There’s also a new sleeve anchor, which Fraser has high hopes for. “Once independent testing is complete, we are expecting to be able to say it has up to 20% more holding power than anything else that’s currently on the market.” Just released is a consumer-friendly flip-top bottle packaging that’s so simple in its logic that it’s a wonder it hasn’t been done before.

Look at the Macsim website, which is soon to be relaunched, and there are a few items that don’t seem to have a direct connection with fasteners. There are window packers and safety equipment, hacksaws and cutting wheels, many of which date back to the days prior to Fraser joining the company. “They’re still profitable, so I still sell them,” he says. There are also storage bins and packing tapes, which Fraser explains by way of saying they import a lot of those items for use in their warehouse so why not sell them? “We cover the costs by selling as much as we give away,” he says.

As for the next big thing in fasteners, Fraser is circumspect. “Anchors are certainly changing,” he says. “Fifteen years ago, everyone used to use a sleeve anchor – or a mason bolt. There’s more chemical anchoring being used now. “And there are screw bolts, which are like bolts with threads that you actually screw into the concrete so there’s no concrete failure as a result of the expansion stress from the anchor; you just screw it in. But the downside of this type of anchor is that they are expensive so they won’t take over. Still, it’s eating away at that sleeve anchor market that was originally the hero anchor.”

As our interview winds down, I ask Fraser where he’s off to next, wondering where his next source of inspiration is likely to originate from. “I’m going up to China in September. I’ll be doing a feasibility study to see if there’s an opportunity there.” No doubt, he’ll come back with a head full of new ideas too.
MD 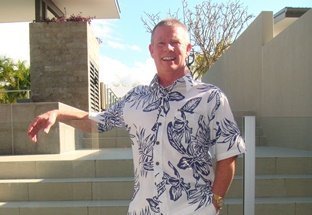