Men’s Sheds aim to improve the health and wellbeing of members by providing a safe and friendly environment where men feel that they belong while they work on meaningful projects. However, they can also represent business opportunities.
The age-old tradition of Aussie blokes stealing off into the backyard shed to tinker with some old tools or have a quiet beer away from the rigors of the household is an age-old tradition. Now, however, communities all over Australia are embracing them.

Men who are retired, unemployed or isolated are joining their local Men’s Shed branch to meet others and undertake all kinds of activities, which might include woodwork, metalwork or community projects. From its humble beginnings in suburban Sydney in 1998, Australian Men’s Shed Association (AMSA) now represents more than 60,000 men in some 650 branches across Australia, making it the largest men’s support organisation in Australia.

In the past 18 months alone, memberships have increased by more than 100%, with new branches opening at the rate of one per day. That certainly suggests a burgeoning movement. And importantly for hardware retailers and suppliers, it could represent lucrative business opportunities, with the added bonus of an altruistic slant being thrown in. But first, let’s look at what it is about Men’s Sheds that is striking such a cord in the male community. Why are men flocking to be part of this body that is now a central piece to the federal government’s male health policy? It might the woodwork and the metalwork projects that allow men to continue to use skills built up over a lifetime. Maybe it’s the opportunity to learn to cook for one in an industrial kitchen or the chance to be part of a team restoring a historical aeroplane. Perhaps it’s the possibility of finding an elusive recipe for the perfect home brew.

The Men’s Shed movement is proving to be an overwhelming success for all of the above reasons but for many, it’s also the opportunity to connect with a community of like-minded people instead of feeling lonely and isolated. “Men’s Sheds is achieving more than fixing old furniture and building toys; it is fixing men and building communities,” says AMSA Executive Officer, David Helmers. “Sheds, or branches, offer a welcoming environment for men to build items for their local communities as a group. They’re a place where they can come together in mateship and interaction.”

In 1998, Ted Donnelly and Ruth Van Herk started the first Men’s Shed in Lane Cove, Sydney, under the auspices of the North Sydney region of UnitingCare Ageing. At that time there was little knowledge of Men’s Sheds and it soon fielded queries about its operations and how men could start a Men’s Shed in their own area. Because they were keen to help and pass on what they had learned, the Lane Cove branch evolved into a resource centre for new sheds. In June 2005, Donnelly designed a website in the hope that it would become a conversation hub for the various branches to share ideas on projects, training, materials and local events. It was a discussion forum, but it also included contact details of all the existing branches. The discussion forum was not utilised as well as Donnelly anticipated, but the branch details became an important part of the AMSA database.

Sheds had been popping up in a number of states, with a particularly strong presence in Victoria. Gary Green, from the Orbost chapter of Men’s Shed, took it upon himself to organise a conference that would bring the various branches together so that some of the research that had been compiled, including the health benefits already derived as a result of being a member at a Men’s Shed branch, could be explained.

When news of the conference circulated, representatives from branches all over the country signed on to what would become a vigorous, well attended and inspiring conference in Lakes Entrance. It was only then that the ‘shedders’ began to realise the traction the movement was gaining. The second national conference, hosted by the original Lane Cove Community Men’s Shed branch, was scheduled to be held in Manly in September 2007. By then, the website’s database listed 214 Sheds. But there was also a significant number of groups who, for various reasons, were not listed, and roughly 40% of these ‘Sheds’ were still in the research, planning or start-up stages. All were looking for information and advice.

Because of the hype surrounding the conference and the numbers it might attract, government departments began to take notice, as well as funding organisations, men’s health groups and the media. As a result, the AMSA was formed in January 2007. In August 2007, the AMSA received its first private donation and obtained a government grant for $1,500. This enabled it to cover the usual start-up expenses – a computer, printer, telephone and stationery, etc – and to establish a direct AMSA email link. Soon after, the AMSA received federal government funding to employ David Helmers as its first Executive Officer.

In May 2010, the federal government promised the AMSA a grant of $3.3 million over three years, enabling it to employ a further three staff members to cover marketing, insurance and community development, and to become the peak body representing Men’s Shed in Australia. It also has provision for the AMSA to fund grants through the Shed Development Program. Today, the Australian Men’s Shed Association continues to represent and promote the shed movement to government and local council offices, and to help men set up new branches.What’s that got to do with tools?

While some of the 600-plus Men’s Sheds around the country focus on cooking, home-brewing, computer training or card games as their primary activities, the majority are workshops involving the heavy use of tools. Members at the Men’s Shed in Narromine, New South Wales, for example, restored a vintage aeroplane and the Wangaratta Shed in north-east Victoria specialises in bicycle repairs. The Melton Men’s Shed just outside Melbourne is one of the bigger branches around the country with designated woodwork, metalwork and garden areas, as well as a television viewing areas and an industrial-sized kitchen. Members there routinely invite disability groups over and they’ve made toys or chairs and desks with special handles for kids with cerebral palsy.

In some cases, local councils get involved by providing the venue and funding. In return, the Men’s Shed might build children’s playgrounds or fix damaged park benches and council equipment. “The AMSA has no say in what each of the Sheds chooses as its primary activity. It’s totally up to them. They create the character of their Shed,” says Andrew Stark, Marketing & Communications Manager at AMSA.

“We like it if there’s some sort of community involvement, partly because it helps in gaining funding, but ultimately it’s up to them to decide what they want to do.” There’s no rule that says a Men’s Shed must provide a community service, as the concept already provides a service to its members. Members, who are a combination of ex-tradesmen and professionals, often feel lost after they move into retirement. All too suddenly their lives lack direction, and it can take time to adjust to that. Men’s Sheds give them a purpose and a sense of belonging while simultaneously filling the void left by retirement. It was only in 2006 that the Men’s Shed movement realised the role it was playing in preventing depression and suicide. By banding together, men can feel like they’re accomplishing something worthy with their time, and some might even learn new skills, like how to make a letterbox for their driveway or a steam train for their grandchildren. All are reasons for men to look forward to the next Men’s Shed meeting.

How can you help?

Find out where your closest Men’s Shed is and see if you can provide training, expertise or tools. Maybe you can offer discounts on tools or instigate a loyalty program specifically for Men’s Shed members. You might even be jolted into action by starting your own Men’s Shed branch. Have you got an area in your store that you can offer as a workshop for Men’s Shed members, either during the day or after hours? Can you or one of your staff members teach men how to use an angle grinder or circular saw? Can you offer yourselves as the experts when they need advice on which type of fastener best suits a particular job? Are you willing to offer your time and knowledge to a Men’s Shed outlet?

The possibilities are limited only by your own imagination.

What’s in it for you as a hardware retailer or supplier?

In a word, sales, but with the comforting knowledge that you’re contributing towards a worthy cause that, in many cases, gives back to its local community. 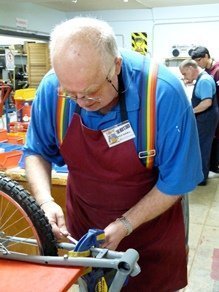