Mitre 10 New Zealand goes from strength to strength as it opens five new Mitre 10 Mega stores before Christmas. Four stores, range in size from 5000m2 to 10,500m2, were set open in consecutive weeks, starting with Masterton on October 14. The Masterton store opening was followed by Hastings (October 21), Te Awamutu (October 28) and Palmerston North (November 4), with the Greymouth store (December 5) set to be the seventh Mitre 10 Mega outlet opened in 2011. Four new stores were opened during 2010, with at least six more scheduled for completion in 2012.

“We’re investing in more stores and building more footprint than any other retailer in New Zealand at the moment,” said Mitre 10 New Zealand chief executive John Hartmann. “That’s a reflection of the fact that customers like what we are doing with the stores and reinforces the confidence our member owners have in the pulling power of the brand. “We are meeting a strong consumer demand, particularly in the provincial and rural centres of New Zealand, where retailers just haven’t been investing.”

Hartmann says the Hastings store is an example of how successful the Mega format has been for Mitre 10. “It was our first Mega store when it opened seven years ago. It reached capacity after five years and now we’re doubling the size to meet local customer demand,” he said. “I think it also helps that our stores are New Zealand owned and operated and that they play such an active role in the communities in which they operate. On just about any weekend, you can go to any one of our stores and they will be involved in local or national fund raising or community support initiatives.”

Hartmann said the current expansion plans would grow the national network of Mitre 10 and Mitre 10 Mega stores to well over 100 outlets. “We’re the largest hardware and trade retailer in New Zealand, the largest garden supplier and, following our partnership with Columbus Coffee, will soon be the largest chain of in-store cafes. We’ve also recruited specialist resources to work with our trade business to improve our services to trade customers and that’s already bringing results. Mitre 10 has just been accredited as one of two suppliers of trade materials for the Christchurch rebuild. “One of the other benefits our new stores tend to bring is that we increase retail traffic and attract other retailers to the area and, in the case of the Masterton store, we are actively seeking new retailers to come to town and be part of our site. Our specialist design and set-up team also stays locally for the duration of the project.” Hartmann said Mitre 10’s expansion phase looked set to continue for some time in both the major centres and rural communities.

“We are growing market share both through store to store comparisons of sales and through expanding the number of stores we operate. We have great local suppliers and a comprehensive international supply chain that allows us to provide quality products at everyday low prices. It’s definitely a mix of services and products that’s working for Mitre 10.” 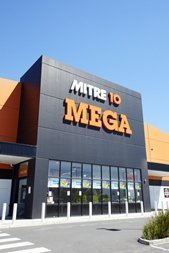