The China International Hardware Show is further evidence that China has moved on from being the world’s factory to becoming the world’s market. Ray Quek attended the event.

The show’s return to Shanghai in 2011 offered a very different perspective. It became apparent that there were two main objectives for the show’s organisers. Firstly, they seemed to be working hard to reposition the trade fair to target the growing strength of the domestic Chinese market. There was also a concerted effort to establish better branding for Chinese products.

The China International Hardware Show (CIHS) has been established as the leading trade fair in Asia following the largest hardware event in Cologne, Germany. It offers a comprehensive range of products and services for buyers in the hardware DIY sector. This year, approximately 2,400 exhibitors attracted over 40,000 visitors representing 85 countries.

Over the last three years, CIHS has recognised the robust growth in the local Chinese market. As a result it has adopted a repositioning strategy from being a sourcing platform for exports to one that emphasizes imports.

In conjunction with the China National Hardware Association (CNHA), the show has implemented a strategy that increases visitor promotional activities within China by organizing events prior to the show that held in provinces across the country. This is in addition to its traditional promotional activities to attract international exhibitors and visitors.

Koelnmesse Asia Pacific vice president, Michael Dreyer, says the exhibition acts as a barometer for current and future trends in the hardware industry. Since its inception 11 years ago, it has grown to be the biggest in the Asia Pacific region.

“We have sharpened our efforts on domestic public relations, marketing and promotion involving an intensive series of high-profile conferences and launching a new online platform to heighten awareness and visibility,” explains Dreyer. “This is to ensure that domestic buyers come to the event in larger numbers than before. With quality buyers come happy exhibitors.”

Daniel Voelkel, president of Voelkel Gmbh says that exhibiting at CIHS allowed his company to tap into the Chinese market. “Which better place can give you a chance to meet buyers from China? It’s not our first time exhibiting here but…you can be sure we will be back next time.”

CEO Alberto Marchina Daued, a Mexican exhibitor echoed the success he had over the last five years with promoting his products to the burgeoning Chinese domestic market. “It takes time to be successful in China. If companies want to enter this big market, the best platform is CHIS…It’s a long term business.”

After the impact of the global financial crisis in 2009, CIHS in 2011 once again saw increased interest from international hardware manufacturers interested in the Chinese market.

John Bielecki, global sales director of Ultra Lube from the US says, “I’m still very surprised to meet so many overseas visitors. It’s very good for our business, but our main target is the Chinese market. You cannot pretend to be involved in the global market if you don’t want to sell to China.”

Creating brand awareness for China-made products was also high on the agenda this year for the show organisers. CNHA president, Zhang Dongli says that after 11 years of developing the event, his goal was to encourage international manufacturers to bring their expertise in R&D, technology and brand building to China foster better contacts and relationships with domestic manufacturers.

“We would like to use the exhibition as a platform to encourage international manufacturers to bring their expertise and technology to China to share and learn from each other so that we can promote the local hardware industry,” he says.

Shi mentions that most Chinese companies are export oriented, so after the GFC, they have been encouraged to address both domestic and international markets.

“Currently, exports account for between 40 to 50 percent for many Chinese companies. However, in order to compete in the global market, they need to improve product quality and be able to export in conjunction with independent brands,” she said.

Furthermore, the CNHA has advocated the need to research different international markets to assist with creating products and brand awareness. This knowledge will help to target the high-end section of the Chinese domestic market because locally made brands are not recognized, or not popular with domestic consumers.

As part of the mandate to focus on quality and brand building, the trade fair launched the “Best of China” showcase which highlighted examples of innovative China made products that can compete in western markets.

On display were the winning entries from the “Best of China” competition. These products were given recognition for new technologies, product safety, environmental aspects and outstanding product design.

Shi says the winners were acknowledged for improvements to their brand offering through increased investment in equipment, technology, promotion and better human resources management.

As in previous years, the show included a significant international presence. The German pavillion supported by the Association of German Tool Manufacturers (FWI) participated with 13 exhibitors. Joining them were three Taiwan pavillions put together by the Taiwan Hand Tool Manufacturer’s Association (THTMA), the Importers and Exporters Association of Taipei (IEAT), and the Taichung Importers & Exporters Chamber of Commerce (TIECC) respectively, who brought 120 members to exhibit at CIHS 2011.

For the first time, CIHS has been endorsed by the European DIY Retail Association (EDRA) which means it has gained recognition from a prominent worldwide industry body. This wold attract interest from more overseas visitors.

Ray Quek flew to Shanghai courtesy of the organisers of CIHS including the China National Hardware Association, Koelnmesse, All China Chamber of Commerce in Hardware, Mechanical and Electrical Industry and Light Industry Sub-Council and China Council for the Promotion of International Trade. 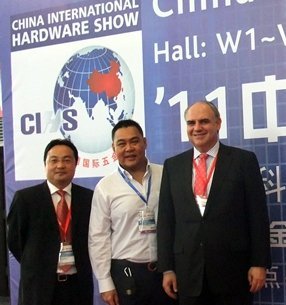