Behind the jocularity of Rod Evins is a smart and savvy business person. Betty Tanddo discovers more about the man behind the smile.

As founder of Banner Hardware in South Australia, Rod Evins may have created a model for retail hardware operations seeking ways to survive the tough business environment of 2012 and 2013. Whether it is dealing with declining demand as housing starts fall and the renovation market wobbles, or coping with the type of competition Masters and a geared-up Bunnings will likely provide, Banner might not have all the answers, but it has certainly made a good start at understanding the questions. And it is likely that finding the right questions to answer is going to be about 90 per cent of survival over the next two years.

The first question that needs to be asked and answered is: who is the market, and what is being done to service that market? Evins replies to that question with his customary honesty. “The demographic map of our customers is largely retiree, baby boomer and generation X,” he says. “We have some work to do on our image with generation Y.”

One of the reasons Evins can be so forthcoming is that, with a family-owned business, he is beholden to no one. It’s a right he has fought hard to preserve.

The story of Banner Hardware begins with the purchase of a single store, a Homestead Hardware “regional” store in Blackwood, a suburb in the hills of Adelaide, in 1979. Previously the store had belonged to Kauri Timber, before it was purchased by United Hardware. United was a co-operative wholesale hardware distributor at that time, and it on-sold that store and five others in a move to increase its wholesale business. The owners of the six stores got together and formed the original Banner Hardware promotional group.

Along with handling the difficulties of marketing associations and wholesale supply, Evins also had to work out how to run stores that were much larger in terms of floorspace. The first time he faced this came when he received the opportunity to open a 3500 square meter store in Norwood in 1982. “It was a little overwhelming,” says Evins, with typical understatement. One of the first things he did (a little ironically) was to study the way Bunnings was running its superstores in Western Australia.

As credit grew tighter in the first half of the 1990s, United Hardware slipped into receivership and was acquired by South Australian food retailer Eudunda Farmers in 1993, which in turn sold United’s operations to Mitre 10 in July 1994.

These events coincided neatly with the launch of the Home Hardware brand by Danks in March 1993. Danks took over much of the wholesale business previously handled by United Hardware. Despite the appeal of the Danks marketing might, Evins decided not to join that particular band wagon. “I wanted to remain fiercely independent, and the Danks model just did not fit my vision of the future,” he explains. Fortunately, the National Building Suppliers Group (NatBuild) had been formed in 1992.

Banner Hardware, which was now synonymous with the Evins business holdings, decided to use it as its wholesale supplier. Recent moves indicate that Banner is also willing to experiment with closer integration into buying groups. It recently acquired a Mitre 10 store in Glenelg, which has been rebadged Banner Mitre 10.

One of the outstanding features of Banner has been its ability to understand and effectively service the trade sector of its market. In one way, that is hardly surprising, as Evins first worked as a builder in his family’s building business (JH Evins Industries). Soon after he had begun radically expand his retail business, he realised that the retail to consumer market space was quite crowded, and that he needed to explore other markets as well, specifically trade customers.

If we were to point to single business move that secured Banner’s future, and has kept it profitable to date, it would be the move by the company into the trade sector. This continues to be an area of expansion. Evins understood immediately that the pure cost of materials was only one factor in what motivated tradespeople to use a particular supplier. Just as important – if not more so – were both the pure convenience the store could offer, and how using that supplier impacted on the total costs of doing business.

In terms of convenience, Banner offers special trade drive-through services, which means trade customers can get in and get out with their purchases as quickly as possible – recognition that for tradespeople time is money. Banner also offers rapid response deliveries, which means tradespeople can reliably seek to have materials delivered as quickly as possible to worksites. From the beginning, Banner also has had a trade representative in every store, and has offered an estimating service to help builders get their costs right when quoting on a job.

It has not been shy about building in a degree of vertical integration. Seeing an unmet demand for truss and frame assembly, the company opened a plant in the early 2000s, and recently has added a second plant.

Its most exciting recent addition is “Banner Home Select”, a facility that helps customers better integrate their purchasing requirements with a builder’s supply chain. Typically, customers will find the various bits and pieces they want used at a range of suppliers, then give that list to the builder, who has to waste time going from supplier to supplier to purchase these.

At Banner Home Select customers go to one facility and select whatever they need from there. This means the builder can order everything needed directly from Banner, saving both time and money through consolidating the order. It’s a brilliant concept, and one that has obviously taken a great deal of behind-the-scenes work to pull off.

What is outstanding about these moves by Banner is that the company has understood and utilised ways of designing the purchasing experience of its customers. Good design takes a situation and finds ways in which the experience can be made more efficient for both the supplier and the purchaser. Any independent hardware retailer would be well-served by studying what Banner has done and finding ways to implement similar design strategies in their own markets. As Evins puts it: “Banner policy in dealing with its customers is ‘do you want the lowest price or the lowest cost?’” It is a critical difference to understand and communicate.

Creative retail practices are not enough, of course, to keep a business on track. Behind the creative strategies and ability to manage both innovation and expansion risk are a set of sturdy management structures. “We have been consistent with the way we have managed our stores, that is, each store has its own manager and is a standalone cost and profit centre,” Evins says.

“Our administration office has a dedicated team of support people that have expertise in stock, pricing, merchandising, training and promotion.” Staff training is also important. The company has a full-time OH&S manager, and makes use of the South Australian Hardware Association’s training courses offered through the TAFE system. “We have an expectation of our people, that they are there to assist our customer, and it would be unreasonable to expect this if we didn’t provide the training required,” Evins explains.

Just as importantly, Rod Evins has managed to secure a good transition of the family-owned business to the next generation. His sons Matt and John are both active in the company, Matt as managing director, and James as marketing director.

Like most independent hardware retailers, Evins does not see things as being particularly rosy in 2012. He notes that housing starts are down and that the renovation materials market has become highly competitive.

On the up side, though, he is quite convinced that the increase in big box hardware stores does not represent an insuperable challenge. “Our view of Masters entering the market is that it will be a battle between them and Bunnings,” he predicts. “Those customers that enjoy shopping in that big box environment, will continue to do so, and those that enjoy the more comfortable surroundings and expert advice of the independent store, will continue to shop there.” He points to figures from the US that suggest big box hardware retail captures only about 50 per cent of the total market.

Though he shows few signs of retiring, Evins can reflect back on nearly33 years in the industry with some satisfaction. “I guess creating the business in the first place, I am pretty happy about, but having my two sons Matthew and James, now running the business makes my wife Loi and I particularly pleased. “As far as the industry is concerned over the past 32 years I have been able to serve outside my business. I was chairman of United Hardware and the Banner Group, chairman of the Natbuild Group, past president of both the Hardware Federation and the Hardware Association of SA and the current treasurer of the International Hardware and Homewares Association.

“It continues to be a great journey and I owe the hardware industry a great debt of gratitude,” he says. Perhaps the industry also owes Evins something for his commitment and dedication to it. Often the first to arrive at an event and one of the last to leave, Evins has already made a considerable contribution to the industry he obviously loves. 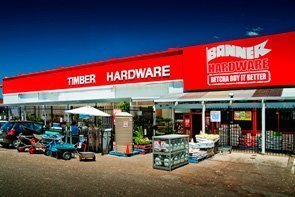