The David O. Jones Mitre 10 hardware store in Stawell, Victoria has just celebrated its 30th anniversary. By all accounts it was a festive event, featuring the standard sausage sizzle, a jumping castle, some animals from the Halls Gap Zoo, even a tame former AFL Carlton footballer, Anthony Koutoufides. With a storewide discount of 20 per cent, it was no surprise that business boomed for the day.

According to David Jones, the main advantage has been the size of the store and the fact it is highway-fronting. “It really stands out and is very easily accessible,” he says.

The changes are set to continue, with the store soon to be re-badged with the new Mitre 10 livery, re-modelling of its timber yard, and a possible shift to solar power. In other ways, though, the operation plans to retain much of its traditional underpinnings. The Jones family, thanks to the involvement of son Simon, will continue to manage the store, and the store will continue to be a lively contributor to its community.

Certainly Jones reports that the stores revenue has improved through the most recent quarter, increasing by 7.5 per cent over the previous corresponding quarter. Jones sees this as stemming from both an increase in trade orders, and a slight boost to consumer confidence.

Jones has sought to make the most of both positive changes, with the store hosting trade nights several times a year, as well as an annual Ladies’ Night which has attracted 200 participants. A Happy Hour event held once a year is also a bit of fun that keeps interest in the store high, giving customers a chance to have something of a shopping spree.

One of the changes to strategy that has helped to boost revenue is a shift towards more homewares and appliances. Jones reports that in particular televisions have become a major seller, along with a range of other electronics. Much of this is a result of the Jaycar Electronics franchise which has become a part of the overall business. These shifts play to the local demographics, with most customers in the 30 to 50 year-old category, primarily do-it-yourself and home owners. “We have a base level of trade that is seasonal in that our gardening, heating and cooling all apply to distinct times of the year,” he explains.

Despite all the positives, Jones is also aware that the year ahead will present a number of challenges. “We have seen a lot of changes in the hardware industry and now we are faced with new competition,” he explains. The entry of larger stores into the market, and the potential of online sales to take a proportion of market share are ongoing concerns. Jones sees the best response to these challenges to be the ongoing provision of outstanding customer services, and involvement in the local community. “The community of Stawell has been fantastic with their support,” he says. “We support a lot of clubs in Stawell and it works both ways, as they support our business as well. This has helped not only ensure we remain open in Stawell, but it has allowed for us to expand the business enormously.” 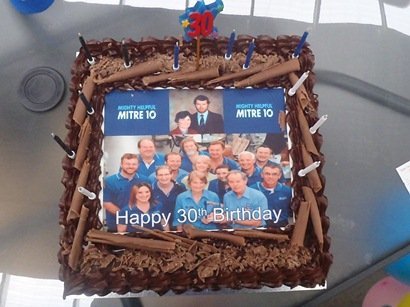