The twin cities of Albury and Wodonga on the New South Wales/Victoria border form a regional hub that has long been an attractant for business, industry, and people seeking a mixed rural/urban setting in which to live. The population estimate is around 80,000 people, with two-thirds over the age of 18 years.

There are around 35,000 private dwellings, with two-thirds of those either owned or in the process of being purchased. Around a quarter of the population has an income in excess of $50,000 a year. Healthcare, manufacturing and retail trade are the largest employers. Approvals for residential building were steady from 2004 onwards, reached a peak in 2009/10,and then dropped sharply, by close to half, for 2010/11, going back to 2000/01 levels. It comes as no surprise, given those demographics, that the hub provides a fertile area for hardware stores, especially those with a trade focus. The facade of the Dahlsens store in Albury bears a painted sign that reads “For the builder and serious home renovator” — a nice way to indicate the store has a trade focus, but is welcoming to DIYers who have a bigger project to complete.

Located in the airport estate, which is a major growth area for residential and commercial development, the store is just a five-minute drive from downtown Albury. The store joined the Dahlsens network three years ago and won the Dahlsens Store of the Year award for 2011. The criteria includes year-on-year growth, profitability and intangible factors such as team spirit.

The site employs 55 personnel, with 95 per cent of those permanent. It consists of three buildings. There is a manufacturing plant (producing roof trusses and other goods), a trade retail building, which includes a three-line drive-through service, and a retail area. The buildings are 1350sqm, 1638sqm and 2400sqm respectively. Including ample parking, the site covers 16,200sqm in total. This combination is one of the store’s major competitive advantages, according to the current store manager, Aaron Pontt, who been in that role for over three and a half years. “Having all three sites in one place is a big point of difference,” he explains. “It’s a complete package, in terms of what we can offer — a ‘one-stop shop’.

“The site has emerged as a serious player in the building industry for the last three years. In some ways it works as a bigger version of the Dahlsens trade store in Wodonga, which as had a presence here for the past 19 years. The sites share an active market of discerning builders, home renovators and retail customers.” “The strongest departments in the store are timber, truss and frame, and building supplies, supplemented by paint and plumbing supplies. We also supply and fit kitchens, door furniture, provide a power and hand tool range, and a new leisure range,” he adds.

One of the cornerstones of Dahlsens Albury strategy is its manufacturing facility. “We have local estimators and detailers on site which means customers can get access to corporate plans and ideas through a face-to-face service,” Pontt says. “We have staff that can go out and do estimations and others that can go out and measure up and draw up plans.

“As all the manufacturing is done locally, it means that any rectifications or problem solving that are needed can be done quickly. We have people that can immediately go out and fix just about anything that is not quite right.” The store’s strategy certainly seems to be working. “We have been lucky,” Pontt modestly states. “Our sales figures have been up by 10 per cent, like to like, from the previous year’s figures. One factor that has helped boost revenue is the addition of a nursery.” The store has also benefitted from some of the shakeout in retail. “A major account came across to us because one of our competitors closed shop,” Pontt says. “This has really helped to boost growth in timber and building supplies, as well as some non-core areas.”

“There is a six month induction period with an orientation program they go through. For the trade and frame truss part of the business, we outsource training, with the trainees obtaining a manufacturing or merchandising certificate. Everyone gets the opportunity to get a nationally recognised certificate.

“There is also a management development program. This is done partly in-house, but it is also done through an external provider which works with all the Dahlsens stores. We’ve been lucky enough to have one person go through it last year and two people the year before. We’ve had one person go from a senior role on the retail floor to a trade manager’s role.

“Dahlsens have a lot of nationally recognised degrees and diplomas where you can really further yourself — which is a breath of fresh air for me! Some companies have internal training mechanisms that are not recognised or acknowledged elsewhere.” The store also involves itself actively with its community, including sporting projects such as the Albury Gold Cup, (a popular country racing carnival) and community projects such as the Give Dale Independence (GDI) Project that is initiated by the Murray Division of the Master Builders Association of NSW.

For this project, the Murray Division of Master Builders Association of NSW is constructing a re-locatable home that will provide greater independence for a young local Albury man who suffers from cerebral palsy, epilepsy and also has a heart condition. The entire project, overseen by local Master Builder members, will be completed completely by donation from the local building industry including work conducted by apprentices from the local TAFE.

Like many in the hardware retail industry, Pontt sees the growth in big-box retailers to be a major factor affecting the industry’s future. However, he doesn’t see them as being unstoppable. Not at all.

“A central concern is the emergence of the big box retailers, and the way they dominate and try to push out the smaller players,” he explains. “A lot of companies are starting to see that we have outlasted the competition and are coming to us. They are giving us this opportunity and not really shopping elsewhere.” The key is that consumers do not think solely in terms of price. “While we have competitive prices, we are not always the cheapest. The add-on advantage with customer service and the people we have at the store with their product knowledge, and skill set means that we have a very attractive offer to make.

“We like to work with the trade and the trade market is what we predominantly deal with, and I believe we do it well with the right people.”

The Dahlsens e-commerce strategy is driven by the central head office. The Dahlsens website (www.dahlsens.com.au) provides access to a range of options, including online quote requests, product listings, and an interactive, 3-D kitchen planning tool. 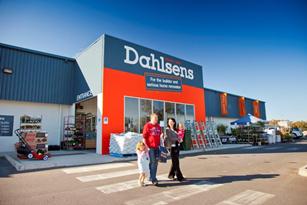