How much value really is there in a hardware retail brand? Kierran Fiegert (Buzz, to most of his suppliers and customers), can attest that there’s a great deal to be earned from investing in the change to a name that better represents the store’s profile and clientele. He says his Cowell Home Timber & Hardware has found immediate trading results following its renovation and change from the other major Danks brand Thrifty Link last year.

Cowell is a small township on the eastern side of South Australia’s Eyre Peninsula, about five hours drive north of Adelaide. It has an in-town population of less than 700 people, with the wider Franklin Harbour District Council area home to around 1400 residents. The demographic profile is skewed slightly older with 55-64 year olds making up just over 18% with 25-34 year olds and 35-44 year olds closely following behind. There seem to be a lot of single income households with almost 60% gainfully employed and around 37% not active in the labour force. This population swells during holiday periods when the nearby beach and fishing opportunities attract families from all over the central part of the South Australia. Inland, the area also hosts a range of mining and agricultural interests, all of which rely on the local hardware retailer for a range of items and services.

Kierran and Hayley Fiegert arrived in town over ten years ago and took on the Thrifty Link hardware store, in partnership with Hayley’s parents, in 2006. Within two weeks they began trialling Sunday trading on top of the then six-day week and quickly made it a permanent feature. “The Sunday trading offer has been very well supported by customers,” Buzz says.

The couple bought out Hayley’s parents’ share of the business around 18 months ago, before beginning a $60,000 facelift and rebranding exercise early last year. Just a year later, Buzz says there has been no looking back on that investment decision, nor the hours of labour he and his brother-in-law contributed to the project.

“We could not be happier with the move from Thrifty to Home,” he told the Hardware Journal. “I think we are viewed now as being the – quote – proper hardware store.”

As well as the name and branding change, the shift included a near-full renovation and refit. “We didn’t just get a coat of paint – we replaced the entire front of the shop and half the roof,” Buzz explains. The team also built a specialist outdoor room, housing outdoor furniture and barbecues, but also providing a real-life display of some of the store’s decking options.

Buzz says being part of the Danks group helped to make the process easy and effective. “Danks have made it a pleasurable experience to say the least,” he says. “They have helped out wherever and whenever we asked.” While stores wishing to switch between brands within the group are welcome to do so, they are asked to meet certain criteria in terms of store size and stock, according to Buzz.

The new Cowell Home Timber and Hardware caters to both retail and trade customers at an approximately 60-40 split to the retail side. Such a balance is typical of a country store whose market isn’t big enough to specialise on one side or the other, but Buzz says there is plenty of crossover in the demand. Most promotions and catalogue items are of interest and appeal to both sides, he says.

At the moment, major departments include building materials, garden, outdoor living and camping, painting and plumbing accessories. These cover the full range of trade requirements as well as lo DIY and home hardware needs. Importantly however, the store also caters to the regular influxes of tourists, particularly over the summer and Easter breaks. It’s all hands-on-deck at these times, when the store’s three staff, along with Buzz and Hayley themselves, are at their busiest.

Buzz says there is a great deal of common space between trade and domestic hardware consumers in Cowell, allowing the store some flexibility in its promotions. “Most of our catalogues will target both (trade and retail consumers),” he says.

That uniquely-balanced mix of trade and home business may, however, be set to change in the coming years, as a number of major mining investments in the region come on line. Plans are already in place further develop the Wilcherry Hill Iron Ore project (around 150km from Cowell) with a worker accommodation facility and, most relevant for the hardware trade, a multi-user port facility near to Cowell. That is set to increase numbers in Cowell itself, which could directly impact the hardware store. Buzz says he is watching developments closely and is ready to adjust stock lines to cater for the industry as soon as that demand builds.

Other iron ore projects are in the planning stages across the Eyre Peninsula, while exploration continues for new exploitable deposits.

While many customers, both present and future, may be temporary visitors to Cowell, there’s still no underestimating the value of a strong reputation within the town and the surrounding district. That’s something Buzz and Hayley have worked hard on since first taking on the business, generating strong commitment and word-of-mouth support throughout the area.

“I think the thing that sets us apart is that we are locals and have been for over ten years,” Buzz points out. While he comes originally from a farm outside the district (Hayley is already from the neigbourhood), Buzz has been a Cowell resident and active member of the community since before 2000. That includes more than 13 years (and counting) with the local Australian Rules football club – the Cowell Cats – which competes as part of the Eastern Eyre Football League. Add to that, Cowell Home Hardware is a major sponsor of the club, as well as a number of other sporting bodies in the district.

And if you miss them on the football field, the Fiegerts are also easy to find around town. With four children, aged from 12 months to seven years’ old, the family is an active member of the Cowell Area School as well.

Buzz says that the support from Cowell residents has been a big component in the store’s most recent success. That’s not only through the loyalty of the local community – Buzz has a customer base that stretches to around 100km outside of town, but also through their referral and goodwill among Cowell’s less permanent population.

Not that Cowell Home Timber and Hardware is only recognised in town and around the Eyre Peninsula. Its success has also been rewarded at the state level, with the then Thrifty Link store taking out the Hardware Association of South Australia’s Category A (for outlets of less than 1000 square metres) store of the year award in 2009.

Buzz counts it as the most memorable moment of his career in hardware, saying it was a testament to the hard work of everyone at the store, as well as at Danks – which specifically nominated the store for the award. The awards consider all aspect of the store and its staff, from customer service to specific promotions and even the store facade and lighting.

With all its recent activity, Buzz says the team is looking forward to future success as a Home Hardware store. Other projects on the near horizon include the development of an online presence, with Buzz having already secured an appropriate domain, and further on-the-job training for store staff. 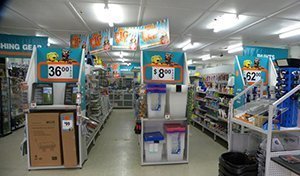