Judging by the attendance, the number of exhibitors and the overall size of the Cologne (Köln) Hardware Show, the answer coming out of the 2012 event was a definite “maybe”. You can always tell when a show is in a little trouble because the press releases provide only numbers for the current year, with no comparison to past events. So while KoelnMesse proudly announced that the 2012 show garnered 53,500 visitors from 132 countries, it didn’t mention that the 2004 show had 74,000 visitors from 114 countries and the 2006 show 75,000 visitors from 140 countries. Worse luck, too: KoelnMesse chose 2006 as the year to expand its trade halls to 255,000 square metres.

Instead of trumpeting the number of visitors, the press releases have chosen to highlight instead something that they term “internationality”, which turns out to actually be a word (who knew?). One suspects it’s a not entirely accurate translation of the German word “Internationalität”, and what is meant is “a wide range of international involvement”. The press release also suggests that: “Within the framework of the International Hardware Fair Cologne 2012, the positive sales trend within the individual industrial sectors over the past year coupled with the simultaneous concentration within the markets and the trade, produced encouraging, concrete order volumes for the exhibiting companies.”

Which means something like “business overall is doing better, so some orders were made at the show”. This is slightly surpassed for obscurity by the reported statement of a gentleman introduced in the press release as “Dr Peter Wüst (Executive Director BHB – Federal Association of German DIY, Building and Garden Specialist Stores / Handelsverband Heimwerken, Bauen und Garten e.V.. He enthuses (we think): “”The International Hardware Fair Cologne has now been held for the second time in its new concentrated form. After focusing on its historical and current core range, the products connected with the theme of ‘hardware’, the marketing concept has now also been renewed in an impressive way and implemented at the fair in diverse approaches.” You’ve gotta love the quotes around “hardware”. Apparently one of the things that happens when you lose one-third of your attendees is you start skimping on the German-English translators.

Another indication that tradeshows (not just this one) are not as important as they once were was the fact that a number of major German hardware manufacturers did not attend the show. Bosch and Karcher, for example. Some of the gossip among those who attended indicated this might partly be due to the presence of some competitors from China. Many German companies have become cautious in exposing upcoming products to the gentlemen from the East. The rumours suggest a number of products surprisingly similar to German originals have been produced by Chinese factories in recent years. That is far from being KoelnMesse’s fault, of course, but it is a significant factor nonetheless. While you can certainly blame some of the fall-off in visitor numbers on the lingering effect of the GFC and the downturn-not-a-recession-they-tell-me that came afterward, there is no excuse for being overlooked for key events. The Hardware Journal not only found itself excluded from the premier press event on the night before the opening of the show. This was nothing like the smooth, efficient German organisation we had dealt with in the past; even smaller hardware trade shows in rural regions of China have done a little better than handing us a hotel room and pointing you in the general direction of the show. It’s all too easy to blame everything on the GFC.

It still works, however

Kidding aside, once we had managed to find our way to the various events we hadn’t been invited to, the event proved to be quite valuable, an opinion shared by many of the attendees to whom we spoke. While no one referred to it as “concentrated”, only “much smaller”, this didn’t stop them from doing a good deal of business and making valuable contacts. As we had suffered from sore feet just from walking around the tradeshow in past years, it’s new size seemed quite welcome to us.

What will be interesting to observe in the future is the way in which the physical trade fair manages to integrate what it offers with virtual tools. There is still a good deal about these events that is haphazard. One has the sense that there is much information and opportunity floating around the place, but that encountering either is a matter of happenstance (Zufall in German, just to keep that internationality going).

Once upon a time many companies employed people who were expert at navigating tradeshows. Not any more. KoelnMesse would do well to consider ways in which what happens at a tradeshow is a little more like more rational business processes.

It’s unlikely we would have made half the use of the show we did if it hadn’t been for the help and generosity of the Hardware Journal’s long-time US correspondent, Bob Vereen. Bob not only had some of the best invites going, he also – after a career spanning more than 40 years writing about the industry – knows just about everyone worth knowing. Bob indicated this may be the last show he goes to, and if that turns out to be the case, he is going to be sorely missed by many people in the industry.

Our tour of the show began with the booths held by a number of US companies who attended, including Arrow Fasteners, Channellock, General Pipe Cleaners, M & P Export Management, Red Devil, Roebic and Little Giant Ladder Systems. They all seemed to be having a good show, and were glad to be there. Over the next few days we attended a number of interesting events, including one held by the Worldwide Do-It-Yourself Council (WDIYC), a North American organisation (www.wdiyc.org). Established over 30 years ago, the Worldwide DIY Council comprises approximately 100 North American manufacturing companies who are interested in, and committed to, increasing and expanding their export sales. The International Networking Reception was co-sponsored with EDRA (European DIY Retail Association), NRHA (North American Retail Hardware Association) and IHA (International Federation of Hardware and Housewares Association). In addition to providing a great opportunity to meet-and-greet likeminded hardware professionals, WDIYC was also promoting its unique 2012 North American DIY Store Tour – a fully escorted tour of over 12 of the largest DIY stores in Vancouver, Whistler and Las Vegas which takes place in May 2012.

The International Hardware Association held an event as well, featuring a number of very interesting speakers. Topics included an examination of social media, and how this can be directly linked to sales, not just brand awareness.
Aussies in Cologne

The Australian industry was well-represented in Cologne with companies such as Bordo Industrial Tools, Dreambaby and Einhell Australia (as part of the Einhell parent company) taking out exhibitor stands. Buyers from different retail groups were also walking the show. John Danks & Son hosted a group of some of its key members and suppliers on a ten-day study tour to Germany to preview the fair and visit some of Europe’s most successful hardware companies.

The highly-tailored program offered members insights into emerging global trends in the hardware market and exclusive access to key industry decision-makers including manufacturers, distributors, retailers and suppliers. After a brief stopover in Singapore, the tour travelled to Berlin and Cologne where a comprehensive event program highlighted the economic, business, investment opportunities and challenges facing the hardware industry. In addition to an all-inclusive tour of the hardware market’s principal exhibition, the tour also offered a glimpse into the business operations of some of the continent’s leading retailers with visits to DIY megastores such as Hagabau, Obi, Bauhaus and Praktiker. This biennial trip involved many of Danks’ top-tier Home Timber & Hardware retailers – all of whom are members of the group’s exclusive Chairman’s Club – accompanied by key executive staff from Danks including Home Timber & Hardware Group general manager, Mark Burrowes.

The tour also included the Danks-based “Proper Rewards” national supplier base who used the opportunity to strengthen business relationships with top-tier retailers as well as key Danks staff.

Tool directions
Some of the direction in tool design and capabilities we noted at the fair include:

More and more tools are utilising digital technology to make them easier to use and to help display accurate indications. For example, some high-end electronic torque wrenches and angle-controlled wrenches can show measurement results on an easily readable display. Top-of-the-line wrenches can store up to 2,000 measurements along with the time and date so that the information can be retrieved in context. If needed, it is even possible to set up a system for transmitting the data from the wrench via radio, WLAN, or Bluetooth.

Tools for older people
Manufacturers are increasingly addressing issues resulting from demographic change. One of the suppliers displayed special fitting and shaping products for elderly people to use at home. This range of household, hobby, and mobile products was primarily designed for people who suffer from physical limitations resulting from handicaps or age.

Achieving high energy efficiency has been a major concern for electric and battery-powered tool manufacturers for many years now. Recently the focus has broadened to cover the complete range of sustainability issues. A new bench drill, for example, is designed in such a way that it can be assembled from only a few parts, most of which take into account the entire value chain in environmental terms. All the components can be recycled once the product has come to the end of its lifecycle.

The design of air tools continues to evolve. One new device can, for example, supply up to 10 bars of compressed air to all types of compressed-air tools, including nail drivers, silicone cartridge guns, tyre inflators and blow guns. The device’s operating pressure can be infinitely adjusted and remains at a constant level. A simple click system allows the portable compressed-air unit to be quickly attached to the worker’s leather belt.

Inspired by the current crop of press releases, we’ve already begun conceiving our coverage for the next Cologne Hardware Fair. Entitled “The Phenomenology of ‘hardware’: aspects of evolution from Zuhandenheit to Vorhandenheit in the design, implementation and usage of exhibition booths”, it promises to be a true bobby dazzler. 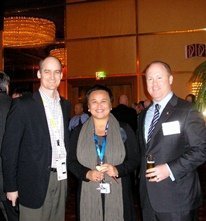