“If we are going to be thriving in five years’ time, it won’t be from the same thing we have done over the last five.” So says Tim Ellery, managing director of Midstream Hardware. Based in the state’s second largest city Mandurah, around 75 kilometers southwest of Perth, the store has certainly been impacted by the downturn in housing and renovation demand that is affecting most urban areas of Australia right now.

But Ellery says that’s just one of the changes affecting the hardware business in the west, with commercial construction also suffering from a prolonged period of stagnation. He warns hardware businesses not to sit on their hands in the expectations of a recovery to the boom levels seen before the global financial crisis. These levels may not be seen again. Rather, retailers (and suppliers) will need to adapt their systems and priorities to the new, much tougher, business environment that is now emerging.

Midstream Hardware, boasting 600 square metres of floor space on the main road of Mandurah, is a predominantly trade-based operation. Ellery says its customer base is made up of 90 per cent professional tradespeople and other businesses. Along with the construction, plumbing, and electrical trades, it services customers from the landscaping, agriculture, and automotive repair sectors. “Our customers are through and through tradies and builders that love tools,” he notes, but also points out that the business began with a much heavier focus on retail customers. That was in 1981, with founders Lawrie and Bet Ellery at the helm. They launched Midstream Hardware with a 270 square-metre shop that catered primarily toward walk-in retail business. Their son, Tim, joined the operation as an 18-year-old in 1983.

The business switched premises to a purpose-built trade store a few years later and has been busy building its strong reputation among professional tradespeople ever since.

Tim Ellery and his wife Donnelle took over management of the business in 1990, and today they employ a team of 10 dedicated and knowledgeable staff, including specialists in specific trades. “We have a nucleus of specialists; everyone has been experienced in the trade side from the beginning,” Ellery says.

That specialist knowledge is something Midstream Hardware prides itself on, and Ellery believes it has become a key differentiator when customers are weighing up their supplies business options. “Our point of difference is that we offer quality products, and back them up with good product knowledge and a focus on the relationships with our customers,” he says.

Knowing customers are able to come in to the store (or call) and speak with someone that understands the key aspects of their trades and can offer impartial and expert advice, has been a staple of Midstream Hardware since its earliest days as a trade-focused retailer, according to Ellery. Midstream Hardware is proud of its independence, but doesn’t go it completely alone when it comes to getting a good deal from its suppliers. The store is part of the MAKIT buying group, one of 13 specialist trade stores under the same umbrella in Western Australia (alongside some 300 regular retail operations across Australia).

Ellery says the relationship has been an important one for Midstream, which has been part of MAKIT since the group first formed around 20 years ago. “At the time, we were buying from a local warehouse and prices where skyrocketing,” he recalls.

“A group of 25 like-stores formed a collated buying group called Hardware 25, (which) formed a relationship with Co-operative Purchasing Services (CPS) which at the time was a co-operative formed to supply charge back arrangements to country co-ops.”

That worked particularly well when applied to the hardware industry and it soon became the major focus for CPS. The independent stores also created a joint promotional banner – and the MAKIT brand was born. “So while MAKIT does not carry the high profile of Mitre 10 and Home Hardware, we have a strong connection to the brand because of our history,” Ellery says, adding that the strength of the group’s buying power means Midstream Hardware’s customers are assured of getting the best value on the store’s full range of tools, supplies, and equipment.

Delivering value
That value is seen at Midstream Hardware through well-considered regular prices, rather than one-off sales events or unsustainable discounting. Ellery says the store also looks to offer extra items or value bundles wherever it can. A recent promotion for Makita combo kits, for example, saw the price drop by $100 from the supplier just a few weeks after they first went on sale. Ellery says the store offered the balance back to those customers who had bought at the higher price, through a $100 voucher for other Makita stock. Ellery says that this focus on delivering value, rather than lowering prices, is built into how it stocks its shelves, as well as being part of its ongoing commitment to product knowledge and customer service.

“So much of the market is driven by price today especially with online offers,” he says. “There is a limit to where you can take pricing, but fortunately there are no limits on service.” Having the best-quality trade-reliable tools and equipment on offer is another essential component of Midstream’s success. Alongside Makita tools, the store carries ranges of brands such as Black & Decker, Hills, ASSA ABLOY, Saint Gobain, and Irwin Tools. Like many trade-based stores, Midstream Hardware is also revamping its online presence. Ellery says this new commercial website will focus on complementing the brick-and-mortar business, rather than offering a completely different business model.

In many ways, the move to online trading is being made simply to deny any other potential competitor a free kick in the new media space, he points out. “I see e-commerce as an exciting new initiative we are taking on,” Ellery says. “I imagine that it will be profitable initially but as the market matures and most (competitors) have an offer, it will be only a defensive strategy.” In this way, he expects most of his current trade, and growth, to come through its standard retail operation, even once the website is up and running. “I think that websites are a bit like computers were years ago – everyone had one sitting in a back office, but not many of us used them to drive our businesses.”

That’s despite acknowledging Midstream’s key markets are changing in many unforeseen ways at present. It’s not just the current downturns in building and construction orders; there’s also the continued squeeze of tough supplier margins and the encroachment of the heavily discounted warehouse stores across urban areas. “I think that the main challenge that we face as a business today is how to grow in a market that is contracting and has new structures,” Ellery says, citing changing ownership models alongside the new entries of larger brands into the retail sphere.

He says the coming changes are akin to the arrival of the big-box business model – still the biggest market transformation he has seen in more than 30 years of the hardware business – and all the consolidation that followed it. “We had to draw a line in the sand and say this is who we are, and as a result we consolidated for a few years and then maintained a sustainable growth pattern,” he explains. That lasted until the global financial crisis hit, and Ellery warns there is still some big movement ahead for independent hardware retailers. “At the moment I think that we are at that stage again.”

Still, he says Midstream Hardware has an important weapon in tackling that expected change. Its relationships with both its professional trade customers and – through the MAKIT buying group – its suppliers will help it to thrive in the years ahead, whatever the exact market conditions. “It’s those strong connections that we will need going forward to tackle the challenges that the changing market will present us,” Ellery says. 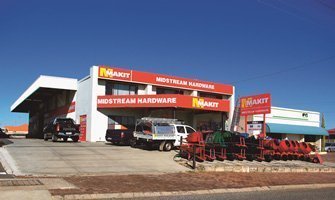