With 150 years of family history behind it, Pink’s Hardware in Clare, South Australia, is maintaining a strong trade, even as the national economy looks to falter

The north-eastern Clare Valley region in South Australia is home to more than just its 28,000 population. There’s also the healthy tourism, agriculture, and wine-making industries, and a diverse local economy in the central town of Clare itself. And straddling both those rural and urban customer bases is Pink’s Hardware, occupying a prime location on the main road. General manager Greg Pink says the store enjoys a 70 per cent retail focus, with additional custom from trade and industry throughout the region. “Our target customers are DIYers, and home handymen and women,” he says. “We also look after farmers, vignerons, and local wineries.”

Gardening enthusiasts also have a reason to come through the Pink’s Hardware doors, with the store playing host to the only garden centre in town. That’s an important speciality that the team has helped to make an institution in the local region. “Twice a year we run a car park sale, bringing fresh plants and running specials over two days on all plants, seedlings and associated products,” Pink says. Alongside gardening and green life, Pink’s Hardware strongest department is its paint and paint accessories section. It works closely with local trade painters as well as brands such as Wattyl and Solver to maintain a small but loyal following in that area.

The store also runs a niche automotive department, with specialised products including a big range of Valvoline oil, the car enthusiast’s lubricant of choice. “Whilst not quite as big now as it has been, we still continue to supply 205-litre drums.” Pink says these specialities help to give the store an important edge in what is a competitive local market. Pink’s Hardware is also up against the Clare Home Hardware store, and building specialist Sanders HBT. But they are not the only advantages the Mitre 10 store commands in the battle for customers. He notes that the company’s local longevity, reputation for customer service, and a focus on store presentation also keep the store in a good position.

Pink’s Hardware was established in Clare in 1861, and has been in the Pink family for the six generations since. Thomas Pink Snr opened it as a specialist carpentry provider, before the business expanded in to a chaff mill, hardware and grain store with the second generation – care of Thomas Pink Jnr – also in the team. The third generation, Thomas Pink Jnr’s sons Francis and Charles carried on the business after his death in 1930.

Francis’ sons, Geoff and Ron, carried on the tradition from 1946. They launched a new store in 1952, close to the current location at the northern end of Clare’s main street, before Ron sold his interest in the business to his brother. In 1971, that store was gutted by a fire. With help from the local community, a new premises was established just 100 metres south of that site with Geoff and his son, Wayne, managing the business. In1986, his son Greg – the great great great grandson of Thomas Pink Snr, joined the business too. He remains the general manager today, and says that long history is one of the business’ greatest sources of pride.

“I think this even today because we have been around for so long we still continue to service older families in the area, they trust us knowing that we looked after their parents and grandparents,” he tells the Hardware Journal. “This also applies to newer customers as well, they know if we’ve been looking after Clare and surrounding districts for so long, we must be doing something right.” Pink says the store’s appearance and organisation also provides a significant advantage in the competitive hardware market locally. “Having a clean, tidy store also makes for a far more pleasant shopping experience, with stock dust free and faced up in well laid out departments,” he says. “It is easier for customers to find what they are after.” Also, helpful, pleasant, and expert staff mean customers can do their shopping with confidence and enjoyment. “Customer service is a big focus and we will always try and help the customer with all facets of their shopping experience,” Pink says.

Staff training is a big part of that, and Pink says all new staff are offered the opportunity to take a Certificate 3 in Retail Services on joining the business. Supervisors take on a Certificate 4 in Retail Management; with both courses trained by outside service providers. There is also regular and ongoing product training with suppliers. “On top of this we have regular monthly staff meetings that usually involve some form of training,” Pink adds.

Pink’s Hardware has been a member of the Mitre 10 buying group since 1972. It had been with the Homestead group which was purchased by Harris Scarfe around that time. While Mitre 10 was still small in South Australia at that time, Pink says it offered better options. “Mitre 10 was a member-owned buying group giving members more say in operation of the company and more control over our own businesses.” Forty years later, he says those advantages still hold true. “Although Mitre 10 has recently been fully purchased by Metcash, the group remains the only true independent in the market and continues to offer its members a lot of benefits.” Those benefits include strong purchasing power, ongoing promotional programs, and fast-moving supply chains. “On top of all that Mitre 10 offers friendship, a willingness to listen to its members, and the most recognised brand name in the Australian hardware market.” Pink’s Hardware is also a good fit with the wider buying group itself, The store has won the Mitre 10 Store of the Year competition eight times at the state level, and was also named national store of the year in 2009.

150 years allows for a lot of good times, and bad, but Pink says the current economic uncertainty has not affected the store’s trading. At the same time, increasing pressure from rival players has yet to find an impact on the balance sheet. He notes that results from the last quarter was equal to the same period last year, with no sign of runoff for the remainder of 2012. “Last (financial) year was a big year trading wise for us, so to finish with the same sort of figures is still a great result.” 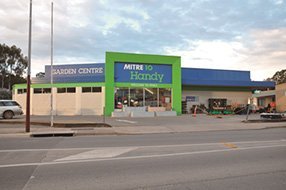