When Moorooduc Timber celebrated its 60th anniversary with a trade show and barbeque recently, it attracted a fair turnout of 200 people, including folks from 25 suppliers. While it may not say much by way of an extravagant company bash, it is for the Victorian store a major event in its own right. For starters, it is the first time the hardware store located on Napean Highway in Mornington, has publicised an event since its existence. In fact, up until the anniversary spots, the low-key retailer has not placed a single advertisement outside the Yellow Pages directory – it discontinued the listing about 20 years ago. Eschewing all forms of self-aggrandizing promotion, the closest it ever got to a sponsorship deal involved setting up a charitable foundation that receives little or no fanfare. The same reticence applies, when you speak to CEO Brian Goding. Brian is the stoic and seasoned hardware expert who has been with Moorooduc Timber since 1959. Unwilling to fuss about past or present achievements, preferring to let the work speak for itself, the rank-and-file boss reveals very little about himself or the company he helms. And the only time he displays any emotion is when he speaks about the jubilee celebration.

“The anniversary trade show was a chance for us to thank our suppliers and customers. It was a wonderful day and everyone was rapt.” You can hardly blame Brian for feeling a little sentimental about the milestone year. Despite media shyness, the company has come a long way from being a modest sawmill selling green hardwood in the 1950s.

The history
Moorooduc Sawmills began in 1951 as a partnership between Bob Parnell, Cliff Goding and Harry Goding. An old sawmill purchased in Cardinia Road, Berwick had been transported to a one-acre site at the corner of Bentons Road and Moorooduc Road, Moorooduc. Shortly after the mill was established, enquiries began pouring in for OB hardwood framing timber. To cope with the sudden demand, the mill employed about 10 additional staff, refurbished an office and built a shed. When the new office and shed were razed in a fire disaster, the company quickly reconstructed and soldiered on, even adding new product lines in the process. When cheaper timber prices forced the sawmill to close in 1958, it was turned into a timber yard, where timber was cut according to orders. The company then cleverly latched on to the growth of the chicken industry that had resulted in growing demand for redgum, OB hardwood, corrugated iron and cement sheet. It was around this time that Brian had joined, and the site relocated to its present location. In 1960, the name was changed to Moorooduc Timber and Hardware as the first major expansion was underway.

Since then, the company has faced many more challenges – in particular the 1980s restructure following Harry Goding’s demise and the retirement of Bob Parnell – but as Brian, the new generation leader, puts it, they just kept “prodding along”.

If nothing else, the 60th year marks the incredible resilience of the hardware retailer. The company has outlasted many of its competitors – nine timber and hardware suppliers within the Mornington area have come and gone in that period – and remains the region’s largest timber supplier. The survival strength of the Victorian store is made more remarkable when one considers the competitive climate in which it now operates, amid the looming presence of big box retailers. Flanking the store, within a one-kilometre radius on each side, are Bunnings and Masters. Another six good-sized timber yards reside within 20 kilometres.

Still, the competition is not something Brian frets over. He simply views it as more reasons for the company to maintain its rock solid relationship with suppliers and customers. “If you sit around and worry about what other people do,” Brian advocates, “you don’t look after your own business.” “What we do is take care of our customers, many of whom have come a long way with us. We also maintain very strong ties with the suppliers.”

Simple as it sounds, it takes a concerted effort. The managing partners, Brian and his two sons, Michael and Richard, can often be found at the warehouse actively servicing customers and taking enquiries. There’s very little that the Godings trio, who together have chalked up over 100 years of ground experience, cannot handle. More important, their wealth of product knowledge and industry knowhow has rubbed off on the store’s staff, comprising five full-time and four part-time employees.

Moorooduc Timber enjoys a reputation for customer service that large retail chains only dream about. Tradespeople, in particular have come to appreciate their easy-going approach to customer service, one that is unfettered by corporate culture and 101 training manuals. To some extent, this has negated the short term effects of price-slashing competition. Loyal customers continue to visit the store for its knowledgeable staff and genuine enquiry response. Says Brian: “It does make a difference when you have three working partners who know the business well. Customers hear about us and recommend our services.”

At the supplies end, the Godings’ expertise, especially in knowing what range of timber species to stock, also bears dividends. Known in the local tradies circle as the “go-to” store for hard-to-locate products also means that Moorooduc Timber maintains a well-stocked inventory. Five large steel sheds that were purpose built in the 1960s provide the extensive storage space that houses the ever expanding range. This includes 11 different sizes of merbau steps, decking, posts and screening, products in keeping with the flourishing outdoor backyard market.

While confiding that merbau belongs to the more price sensitive segment, Brian says that other product groups enjoy brisk business despite cheaper market alternatives. “The quality of our Cypress products, for example, is the best that we’ve seen anywhere. We stick to our prices but that hasn’t stopped customers from coming to us.”

Joining HBT “best thing” Another key to Moorooduc Timber’s sought after product lines was forged when they became a member of the HBT Group. When the store joined HBT about seven years ago, it was because they needed to circumvent a supply blockade erected by a major retailer. HBT had offered the lifeline they badly needed.

Brian intones: “Joining HBT is the best thing that happened in the last several years. They were instrumental in putting us in touch with suppliers who otherwise have not heard of us.” The buying group for independent hardware and building material retailers also provides weekly updates of supplier links and group discounts, which Brian describes as being “very important”.

Encircled by a ring of competitors, Moorooduc Timber continues to do what it does best – give the clients the products they want, and support them when they need help with them. This unspoken ethos has kept the hardware retailer going strong for the last 60 years, while cultivating a steady trade following. Its DIY business, on the other hand, has seen some peaks and throughs. After losing a chunk of the DIY market share to Bunnings when they arrived on the scene some 10 years ago, Brian reports that the battle-hardened retailer had in characteristic form, bounced back to reclaim its territory.

That the store capped off 2012 with a 3 per cent growth over last year’s profits – Brian remains tight lipped about actual figures – symbolises its staying power despite a difficult economy. Although the industry stalwart is not optimistic about 2013, citing feedback from builder customers who complain of declining projects, Brian is nonetheless determined to run Moorooduc Timber with the same, good old fashioned sensibilities that have seen the company make slow but steady progress through the years. 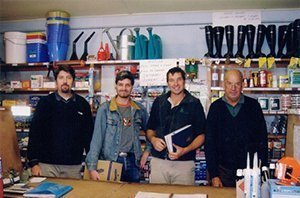